(Editor’s note: A WestportNow reporter on scene of a Post Road East crash discovers it was far from an ordinary accident.)

UPDATE A horrific crash on Westport’s Post Road East today turned strangers into heroes to aid a trapped driver in a smoking car. 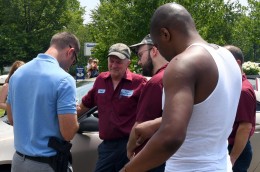 A Westport detective interviews workers from Vautrin Auto and Aaron Tucker (r) of Bridgeport who pulled the injured driver from today’s crash. (CLICK TO ENLARGE) Gordon Joseloff for WestportNow.com

One of the rescuers, Aaron Tucker, 32, jumped off a bus where he was headed to a Stamford job interview and used a dress shirt he had been given at his Bridgeport halfway house as a bandage on the injured man’s head.

“I saw it and just had to help,” said Tucker, who was told by the bus driver he would be left behind if he got off the bus. “I had to do what I had to do.”

The accident occurred shortly after 11:30 a.m. in front of 1701 Post Road East at Westfair Drive. The male driver was headed east when for some unknown reason his car crossed the center divide, struck a tree and flipped over, said Lt. David Farrell.

He was taken to Norwalk Hospital by Westport EMS. There was no word on his condition.

The accident closed Post Road East from Bulkley Avenue to Maple Avenue for three and a half hours as police conducted an investigation. It was reopened shortly after 3 p.m. 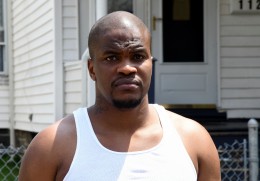 Aaron Tucker, 32, jumped off a Norwalk-bound bus where he was headed for a job interview to help pull the driver from the crashed car. (CLICK TO ENLARGE) Gordon Joseloff for WestportNow.com

“There was smoke coming from under the car so we grabbed a fire extinguisher from the garage,” said Paul Szegedy of Oxford, one of the workers.

“He was in pretty bad shape,” said Scott Luciani of Bridgeport, another Vautrin worker who had been an EMT. “We got him on the ground and stabilized him.”

Jean Simon of Norwalk, the third Vautrin worker, joined in the effort, as did Police Officer Rachel Baron, who arrived on the scene moments later.

But the Vautrin workers pointed to Tucker — by now sitting a bit dazed on a curb and looking for a ride home — as “the real hero.”

“I got into the car and the man was bleeding badly from his head. I took off my shirt to stop the blood flow,” said Tucker, the father of a 21-month-old son.

“Someone said to take the key out of the ignition and I did that.”

Given a ride home by a WestportNow reporter, Tucker was still shaken and wearing a blood-splattered undershirt as he recounted his experience later to workers at the Isaiah House facility on Clinton Avenue in Bridgeport. 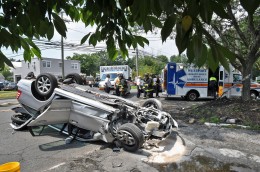 Police said the driver crossed the yellow lines, smashed into a tree, and flipped over. (CLICK TO ENLARGE) Gordon Joseloff for WestportNow.com

Tucker said he had left the house with $1.75 in his pocket and wearing the new shirt as he set off by bus for the Stamford job interview.

“I’m determined to change my life,” he said.

Tucker said he is living in the halfway house after serving a 22-month prison sentence related to a weapons charge.

“I just want to support my son and his mother,” Tucker said.

As a result of publication of this story — and subsequent stories published by national and international media — a GoFundMe page has raised more than $61,000 in thank you donations for Tucker.

This story has been updated with information about the GoFundMe page. See followup stories HERE, HERE, and HERE.