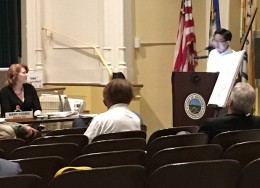 The P&Z’s own text amendment 735 approved in June and allowing no more than two medical marijuana dispensaries in town stipulates such dispensaries be located 1,000 feet from a public building.

Text amendment 747 aims to redefine a public building, since one of the applicants is less than 1,000 feet from a municipal sewage pump building, the other a Connecticut Department of Transportation (CDOT) garage and salt-sand storage facility.

At last week’s meeting Kaufman said a public building should be defined as a place “where there is some level of public participation, such as a place where the public gather for municipal meetings, education, recreational activities, worship and like activities, not a sand and salt storage building.

The amendment has support from Chris Russo, a Fairfield attorney representing New England Advanced Therapeutics, LLC, which has designs for a dispensary at 1803 Post Road East. That location is less than 1,000 feet of a sewage pump station. Russo’s application is scheduled to be heard at the P&Z’s Thursday, May 10, meeting.

P&Z Commissioner Greg Rutstein made the motion to postpone the decision on amendment 747 to a time when the P&Z would be voting on the 833 Post Road East application.

Chip Stephens, who had been instrumental in crafting amendment 735, reiterated what he had said at a previous meeting: that the P&Z has the right to render a decision on the site plan independent of the text amendment based on the intent of the regulation.

“We have the right as a commission to state what our intention was,” Stephens said. “It was not protecting sand and salt. I don’t think there are any courts that would question it.

“We know what the intent was; we know why we did it,” he said.

Kaufman said the decision to postpone her amendment did not dissuade her or Shoreline from moving forward with their application tonight.

Shoreline’s was one of two dispensary applications heard tonight. The other was by Bluepoint Wellness of Westport, LLC for a medical marijuana facility at 1460 Post Road East, the former site of Coco Spa.

Semantics and intent of the 1,000-foot regulation seemed to be part of Bluepoint’s application, too. Attorney Pat Sullivan said that Kidville at 1572 Post Road East and Zaniac, a K-8 science and math enrichment school at 1391 Post Road East are technically not schools or day care centers.

“Neither Zaniac or Kidville are day care facilities under state regulations,” she said.

The distance requirement, however, was not front and center as commissioners focused on security, expected number of customers per week and parking.

Stephens and Commissioner Catherine Walsh also asked Bluepoint principal David Lipton whether he has any intention of opening a recreational marijuana facility on site should the state legalize it as some in Hartford are suggesting to generate tax revenue.

Opponents have argued dispensaries would create the infrastructure for recreational marijuana retail outlets.

“Do you swear that you will not sue us for the right to do it?” Walsh asked.

The public was not that accepting. Peter Anstett of Old Orchard Road said there has been “a feeding frenzy” to open dispensaries in town “at the expense of Westport.” He said medical marijuana should be administered at a hospital, “not a stand-alone retail facility” which could have “unintended consequences.”

Westporter Brian DiMiceli, said he has seen problems caused by such dispensaries.

“Anybody can get a marijuana prescription card for $100,” he said. “It’s a very bad idea for Westport. I lived in California and have seen the buying of marijuana and reselling of it to children at a profit.

“These are profiteers trying to make money at our expense,” he added.

When Shoreline’s application was heard, public comments were equally divided. Longtime resident Don Bergmann called a medical marijuana dispensary “one more, good thing for Westport in my judgment,” and he asked the P&Z to favor Shoreline as the 833 Post Road East site by June.

Westporter Robert Lewis, who described himself as a parent, grandparent and former Little League coach in town, said he is a medical marijuana patient. Lewis said he has suffered for years from Crohn’s disease, and marijuana is “a beneficial treatment plan.”

“Dispensaries at their very core are wellness centers for people with debilitating illnesses,” he said.

Opponents, however, underscored risks of burglaries and armed robberies with patients being held up in parking lots for their marijuana or their cash. Because marijuana is still illegal on the federal level, all transactions are cash only.

“Patients are easy targets for criminals,” said Daniel Xue. “How can we assure they are safe in the parking lot?”

“We have sympathy for patients like (Lewis), but there are those people who will take advantage of the good intentions of the state,’ said Zirong Zang.

Both Shoreline’s and Bluepoint’s applications were held open until the P&Z’s next meeting Thursday, May 10.

New England Advanced Therapeutics is also scheduled to be heard that night.