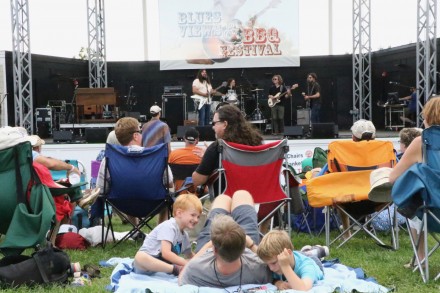 Brooklyn-based National Register performed today for the first time on the second day of the Blues & Views Festival at the Levitt Pavilion in Westport even though it was hard to keep the attention of some young fans. Festival co-organizer Bob LeRose said he was impressed with the huge turnout on Saturday, especially in the evening. He added, “Today’s turnout, so far, seems to even exceed the number of yesterday’s early day arrivals.” (CLICK TO ENLARGE) Dave Matlow for WestportNow.com 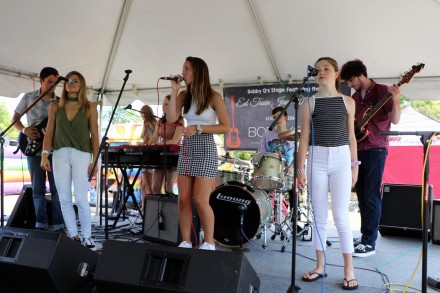 School of Rock vocalist Maddie Baldwin, 16, a junior at Ludlow High School, Fairfield, today performed on the second and final day of the Blues & Views Festival on the Jesup Jam Stage outside of the Levitt Pavilion. (CLICK TO ENLARGE) Dave Matlow for WestportNow.com 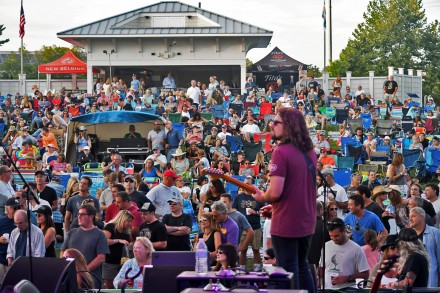 As the day turned into evening, the crowds grew on the opening day of the 12th annual Blues & Views Festival at the Levitt Pavilion today. (CLICK TO ENLARGE) J.C. Martin for WestportNow.com

On the Levitt Pavilion stage, the Memphis, Tennessee band Southern Avenue was firing up the mostly adult, afternoon crowd today. Original, smokey and somewhat raw tunes rang out while the lead female vocalist rocked and gyrated. 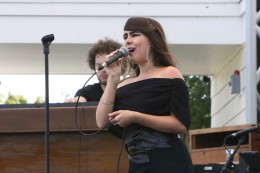 Kat Wright and the Indomitable Soul Band, a soul band based in Burlington, Vermont, were early performers. (CLICK TO ENLARGE) Dave Matlow for WestportNow.com

Down below and under a tent in the Westport Library’s parking lot, the group Infinity Edge belted out the more familiar tunes of such as the Doobie Brothers’ “Without Love” and the Beatles’ “Lucy in the Sky with Diamonds.”

Under crisp azure skies and a sharp, late summer sun, the 12th annual Blues & Views Festival on the east bank of the Saugatuck River was in full swing. Opened at 11 a.m., it goes through 10 p.m. today and continues Sunday from 11 a.m. to 9 p.m. with a $40 admission charge.

Started by Bob LeRose as the Blues, Views and BBQ Festival, this year due to late approvals, the event was scaled back from including its signature barbecue competition run by the Kansas City Barbecue Society. 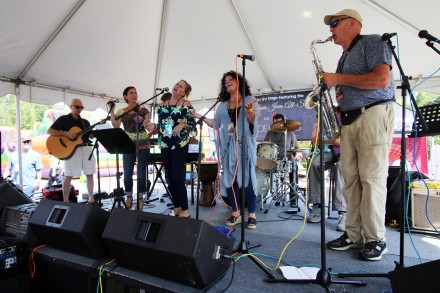 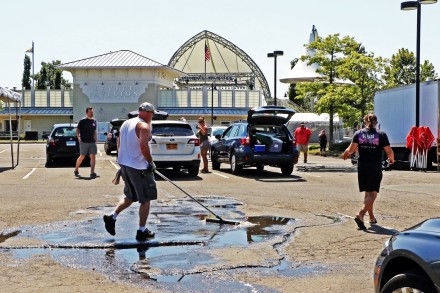 Workers cleaned up the parking lot outside the Levitt Pavilion today as part of the preparations for the weekend Blues & Views Festival. The event kicks off with Jake Kulak at 11:30 a.m. to 12:30 p.m on Saturday. (CLICK TO ENLARGE) Dave Matlow for WestportNow.com 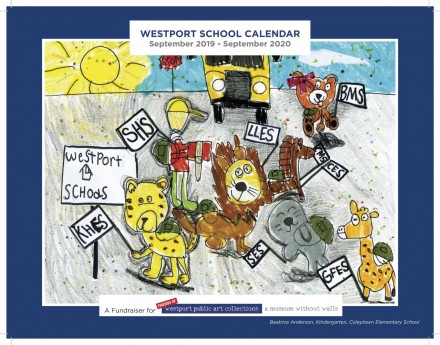 Now that Hollywood is striving for more inclusion, audiences can see stories like “The Peanut Butter Falcon” about those who, previously, were shunted to the sidelines — like Zack Gottsagen, who has Down syndrome.

After writer/directors Tyler Nilson and Michael Schwartz met Gottsagen at a symposium for disabled actors, they created this film about a young man with Down syndrome who is determined to pursue his dream of attending pro-wrestling school.

“Growing up in Florida, Zack wanted nothing more than to be a movie star, and we were having that hard conversation, telling him there’s just not a lot of roles for someone like him,” Schwartz recalls. “He said, ‘Let’s just do it together.’” So they did.

Like a modern Mark Twain adventure, set in North Carolina, it revolves around Zak (Gottsagen), a runaway from a residential nursing home, joining Tyler (Shia LaBeouf), a thief on-the-run who becomes his unlikely confidante and coach. Together, they elude capture in the seaside grasslands, swim, catch fish and drink whiskey as they travel down Pamlico Sound.