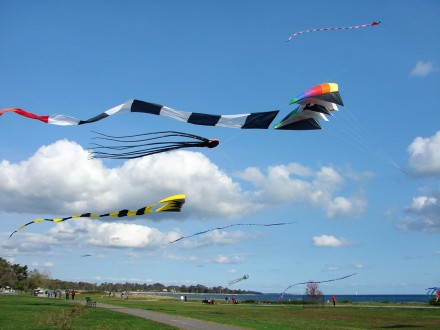 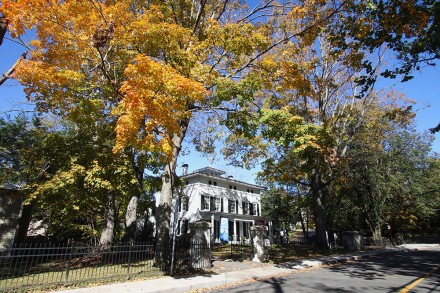 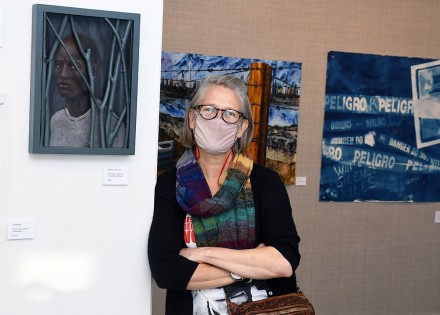 A new show, curated by Jahmane, Rene Soto, and Amy Kaplan, opened today at the gallery at 23 Jesup Road. The show, called “2020 People, Politics, Planet,” will run until Nov. 30. Gallery hours are Thursday, 2 p.m. – 8 p.m. and Friday-Sunday from noon until 6 p.m. It features different area artists’ perspectives on the strange state of things in the year 2020. Pictured above is artist Melissa Newman. www.2020pppwestport.com (CLICK TO ENLARGE) J.C. Martin for WestportNow.com

The Westport Weston Chamber of Commerce (WWCC) is seeking artists and businesses to take part in the eighth annual Halloween Window Painting Contest set for Saturday, Oct. 24, it was announced.

According to Matthew Mandell, WWCC executive director, the event in which children paint merchants’ windows for prizes is expected to to be the largest since the contest’s inception.

The contest is open to elementary, middle school and high school students and has three competition categories: most scary, best Halloween themed and most original.

Nine painters or teams of painters will win $25 gift certificates to Donut Crazy and have photos of them and their artwork posted on social media and local press, the announcement said. 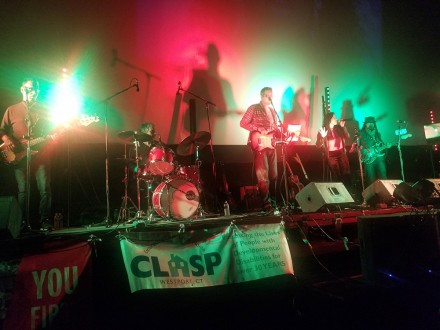 Serving as an origin prequel for the tyrannical nurse in Ken Kesey’s novel/Milos Forman’s film “One Flew Over the Cuckoo’s Nest,” the new, eight-part Netflix series “Ratched,” set in 1947, introduces stern, sharp-tongued Mildred Ratched (Sarah Paulson), who oozes calculating, condescending control over those she encounters.

When her story begins, former WWII nurse Mildred is applying for a job at Northern California’s luxurious Lucia State Hospital, where the notorious killer of four priests, Edmund Tolleson (Finn Wittrock), is to be held before facing trial.

Meanwhile, Mildred also spars with a private detective (Corey Stoll) in the employ of eccentric heiress Lenore Osgood (Sharon Stone), whose deranged son lost his arms and legs after a terrifying LSD trip with his doctor. 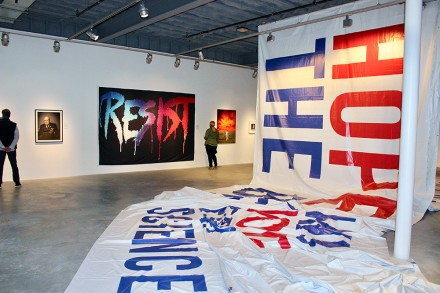 MoCA Westport’s new group exhibition, World Peace, opened to members tonight. The multi-media installation reflects the culture of identity and the fractured political climate of America’s past and present. World Peace will run until Jan. 17. The gallery is open Thursday through Sunday. (CLICK TO ENLARGE) Leslie LaSala for WestportNow.com 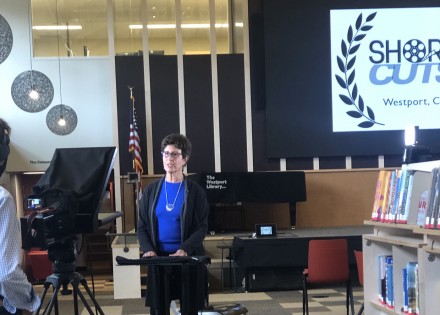 Not to be confused with “The Social Network,” the timely new documentary “The Social Dilemma” explores the insidious addiction to social media that many of us face, particularly those born during the late 1990s and after.

As the logline says, “We tweet, we like, and we share—but what are the consequences of our growing dependence on social media? As digital platforms increasingly become a lifeline to stay connected, Silicon Valley insiders reveal how social media is reprogramming civilization by exposing what’s hiding on the other side of your screen.”

Director Jeff Orlowski (“Chasing Ice,” “Chasing Coral”) devotes much interview time to Tristan Harris, formerly a Google design ethicist and now head of the Center for Humane Technology, a nonprofit whose mission is to “reverse human downgrading by realigning technology with our humanity.”

Harris clarifies how and why social media’s manipulation is so malevolent - addicting and isolating users while harvesting their personal data - explaining, “If the service is free, then you are the product.”

The Westport “Show of Shows” featuring dozens of local personalities in comedy sketches, humorous shout-outs, and musical numbers, is set for Saturday, Oct. 24, at 7 p.m.

The virtual event is designed as a Westport Library fundraiser in lieu of the library’s signature fundraiser “Booked for the Evening,” which had to be canceled due to the pandemic.

Library officials describe the Show of Shows as a “first-of-its-kind community event” scheduled to be broadcast from the library’s Trefz Forum.