Scenes from Wednesday night’s meeting of the Westport Artists Collective at its new home at the Westport Country Playhouse. Membership has grown to about 150 area artists. Lynn U. Miller for WestportNow.com

Winners of sixth annual TEAM Westport Teen Diversity Essay Contest, co-sponsored by the Westport Library, will be announced Wednesday, April 3, at the Saugatuck Congregational Church, it was announced today.

The contest asked students to describe their experiences in 1,000 words or fewer their experiences witnessing, delivering or being on the receiving end of “micro-aggressions” focused on race, ethnicity, religion, sexual orientation or gender identity.

The contest, open to Westport students from grades nine through 12, also asked students to consider steps organizations and other can take to reduce or eliminate such behavior. Deadline for entries was Feb 28.

When you’re hot, you’re hot. Following his debut success with “Get Out” (2017), Jordan Peele’s new horror thriller “Us” has already grossed $70 million, tripling its $20 million budget.

In 1986 at California’s Santa Cruz beachside amusement park, young Adelaide (Madison Curry), clutching a candied apple, has a terrifying experience after wandering into an eerie ‘funhouse of mirrors.’ It’s so traumatic that she’s never discussed it — with anyone.

Back home that night, a menacing family of four, clad in red jumpsuits and carrying huge scissors, suddenly appear in their driveway, trapping the Wilsons inside. It turns out they’re the Wilsons’ zombielike, tethered doppelgängers. 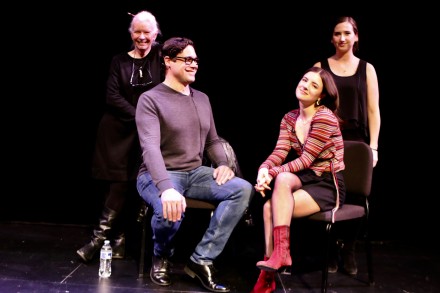 The cast takes a break during rehearsal for tonight’s Script in Hand reading of “Tricks of the Trade” at the Westport Country Playhouse at 7 p.m. Written by the late Sidney Michaels, who lived in Westport, the reading will be directed by Anne Keefe, Playhouse associate artist and curator of the play reading series. Pictured: (standing) Anne Keefe (l) and Alexandra Rappaport, stage directions; (seated) Matthew Greer (l) and Elise Kibler. (CLICK TO ENLARGE) Dave Matlow for WestportNow.com

The “Supper & Soul” dinner and concert series continues Saturday, April 6, with meals at any of eight restaurants followed by an 8 p.m. “New Grass” concert at the Newbury Center, the Westport Weston Chamber of Commerce (WWCC) announced.

According to WWCC Executive Director Matthew Mandell, the $75, single-ticket event entitles participants to a three-course meal at one of eight downtown restaurants, a concert at the Seabury Center and the option to return to any of the same restaurants for happy-hour drinks.

The Colorado band, Head for the Hills, will perform the “New Grass” concert, a sound described as a fusion of Rock, Americana, R&B and Bluegrass.

According to Mandell, the band has played around the country, making a Northeast swing through Connecticut. 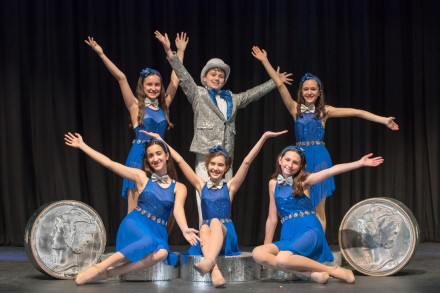 Coleytown Company, Coleytown Middle School’s renowned theatrical troupe, will present an all-school musical, “42nd  Street” next weekend at Bedford Middle School. Performances are Friday, March 29 and Saturday March 30 at 7 p.m., and Saturday, March 30 and Sunday March 31 at 1 p.m. Tickets are available at http://www.SHOWTIX4U.COM (search the term “Coleytown”) for $15, plus a small processing fee. A limited number of $15 tickets will be available at the door prior to showtime. (CLICK TO ENLARGE) Photo by Colleen Clear Photography

The Westport Country Playhouse will host a 2019 Season Kickoff event on Saturday, March 30, from 4 to 6:30 p.m., offering a fun atmosphere with food trucks and beer tastings.

In addition, the Playhouse box office will be open during the event for special, day-of/in person-only ticket discounts. Admission is free and open to the public, an announcement said.

A preview of the 2019 season’s five productions will be hosted by Mark Lamos, Playhouse artistic director, from 5:15 p.m. to 6:15 p.m., with special guest appearances.

Plus, director and choreographer Marcos Santana will appear with “In the Heights” cast members who will sing selections from the Tony Award-winning musical, conceived by “Hamilton” creator Lin-Manuel Miranda. 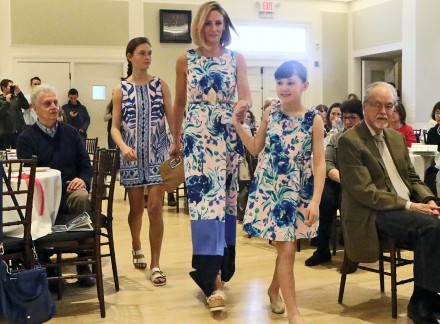 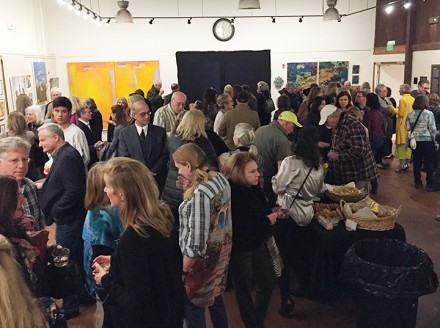 Tonight’s inaugural art opening by the Westport Artists Collective in the Barn Gallery at the Westport Country Playhouse attracted several hundred guests. The pop up art show will be open Thursday, Friday, and Saturday from noon to 5 p.m. with artists talks on Saturday at 3 p.m. (CLICK TO ENLARGE) Contributed photo 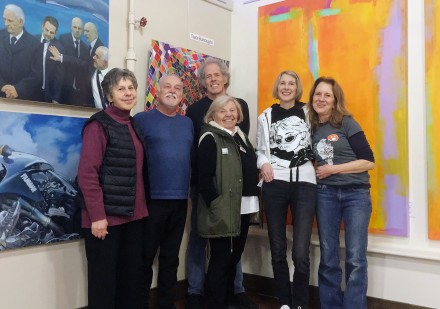 Members of The Artists Collective of Westport will have their inaugural pop up show at their new home in the Barn Gallery at the Westport Playhouse on Wednesday from 6 to 8 p.m. Refreshments, and the piano stylings of Karl Schulz, will complement the work of 15 artists from the Collective, and one artist from Homes For the Brave in Bridgeport. Lead by Nina Bentley, the Collective has been running art classes at this home for homeless vets for the past few years. Pictured (l-r) after hanging almost 70 works of art for the exhibit are Susan Fehlinger, Dan Long, Miggs Burroughs, Nina Bentley, Tammy Winser and Katherine Ross. (CLICK TO ENLARGE) Contributed photo