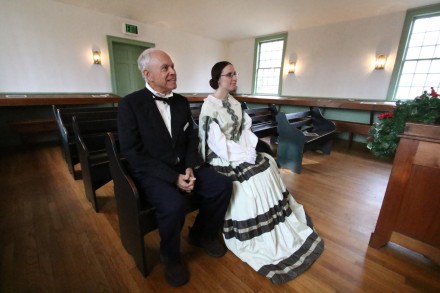 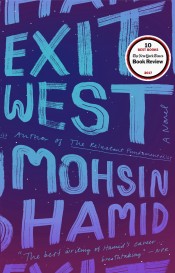 “Exit West” is a novel published in 2017, written by Pakistani author Mohsin Hamid. It is Hamid’s fourth novel. (CLICK TO ENLARGE) Contributed photo

The Westport Library’s annual WestportREADS program has selected “Exit West,” Mohsin Hamid’s award-winning novel about two refugees who find life and love on the run after being forced out of their country by civil war, library officials announced today.

The WestportREADS program is funded by the estate of Jerry A. Tishman and involves a month of programs through February, including library book discussions, films, workshops and other events.

Participants are encouraged to read the book and attend programs related to the book, and its companion titles, over the course of the two months, library officials said.

Among the events is a book discussion on “Behold the Dreamers” by Imbolo Mbue, the story of a young Cameroonian couple making a new life in New York just as the Great Recession upends the economy. It is set for Tuesday, Jan. 15 at 11 a.m. 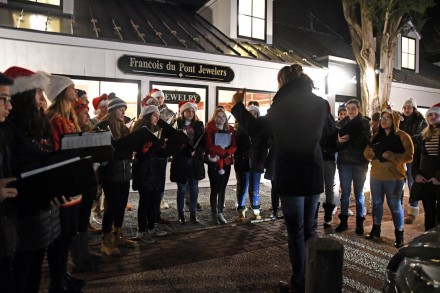 The Staples High School Orphenians performed holiday selections tonight in Westport’s Sconset Square, including in tribute in front of the soon to close Francois du Pont Jewelers. The store’s owner, Noel Dupont, died Nov. 15 at age 59. He was a Staples High School graduate who attended the Berkley College of Music. (CLICK TO ENLARGE) WestportNow.com photo 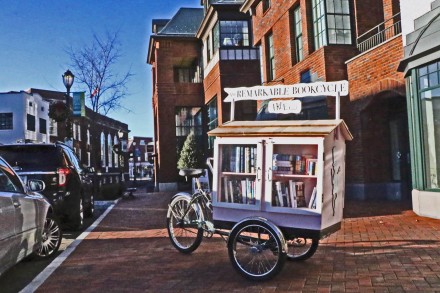 The free Remarkable Bookcycle is now on display on Church Lane within the Bedford Square complex. During the late summer the free book mobile was also on display at Compo Beach. It was Westport best-selling author Jane Green’s “secret project” — a mobile “little free library” inspired by the iconic The Remarkable Book Shop that graced Westport’s Main Street for 35 years. Green said Bedford Square developer David Waldman asked to have the bookcycle take up residence at the complex. (CLICK TO ENLARGE) Dave Matlow for WestportNow.com

“Ralph Breaks the Internet” heats up the competition for 2018’s Best Animated Film.

This satirical sequel to the 2012 hit “Wreck-It Ralph” is set in Litwack’s Video Arcade, where Ralph (John C. Reilly) and Vanellope (Sarah Silverman) spend all their spare time together. While burly Ralph is totally content, spunky Vanellope yearns to spice up her rote racing routine.

A crisis occurs when the steering wheel off her aging Sugar Rush game snaps off and the only replacement part is very expensive on eBay. Since Litwack (Ed O’Neill) has just installed Wi-Fi, Vanellope and Ralph venture into the vast, cacophonous cityscape of the World Wide Web to find it.

Without money to pay for the wheel, they consult the search-engine KnowsMore (Alan Tudyk) and embark on a cyber scavenger hunt, landing in anarchic Slaughter Race, where they encounter leather-clad Shank (Gal Gadot) and her gritty road warrior gang. 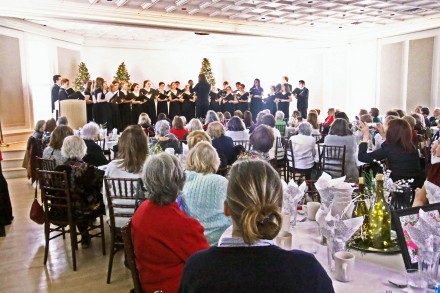 Describing the transaction as an apparent “off-market deal,” it said the sale price was $2.7 million, $90,000 less that she and husband Adam Shulman paid for the property two years ago.

A report from the Town Clerk’s Office confirmed the sale price of the Compo Road South address at one time known as CompoBello in late October at $2.7 million.

Variety said Hathaway and her husband are rumored to have purchased a larger, waterfront home in the area.

The Westport Country Playhouse has announced its 2019 season featuring five productions, including two musicals, two dramas, and a comedy.

Playing April 23 through Nov. 23, under the artistic direction of Mark Lamos, 2019 season tickets are now on sale. Single tickets for 2019 productions will go on sale in March.

“I am happy to announce our first show of the season will be ‘Hamilton’ creator Lin-Manuel Miranda’s ‘In the Heights,’ winner of four Tony Awards including Best Musical and Best Score,” said Lamos.

“With an infectious score featuring a blend of hip-hop, salsa, merengue, and soul, ‘In the Heights’ invites audiences to celebrate life and love in a uniquely American story.”

“The Green Book” is the fascinating, true story of an unlikely friendship that begins with Dr. Don Shirley (Mahershala Ali), an elegant, educated Jamaican-American classical pianist who lived in an apartment above Manhattan’s Carnegie Hall.

In 1962 when his record company sends him on a concert tour of the Deep South, Dr. Shirley hires a gruff, gluttonous, street-wise bouncer from the Copacabana nightclub to be his driver/road manager.

Known as “Tony Lip” (Viggo Mortensen) because his real name of Vallelonga was difficult to pronounce, Tony is an admittedly racist Italian. Married to Dolores (Linda Cardinelli), they live in the Bronx with their two kids and extended family. Even though this job will take him away for two months, it’s a good payday — and he’ll be home for Christmas.

So chain-smoking Tony hits the road in a turquoise Cadillac with starchy, stoic Dr. Shirley. Along the way, they discover much about one another, overcoming their personal differences while facing the inevitable humiliations and indignities of racial prejudice. 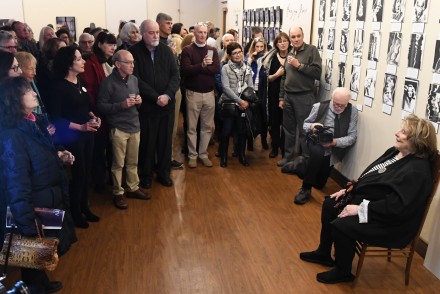 Westport artist Ann Chernow tells a packed audience tonight about her works displayed at the new Gallery at the Westport Country Playhouse. She and fellow Westport artist Miggs Burroughs joined to produce the exhibit, “Amazing Grace,” which focuses on real and invented people from life’s shadows. The inaugural exhibit was made possible through a partnership the Playhouse formed with the Westport Permanent Art Collection and the Artists Collective of Westport. (CLICK TO ENLARGE) WestportNow.com photo