When Danny finally convinces the reluctant fishermen, his friends can’t believe he fell for the joke: “Do you really think we’d sign a buoy band with the combined age of 643?”

Nevertheless, Danny persists, convinced, “In a world saturated with manufactured pop bands, the fishermen are a real catch!”

The rest is music history. After signing with Island Records, the Fishermen’s debut became the biggest selling traditional folk album of all time. The weaknesses of the film lie with writers Nick Moorcroft and Meg Leonard, who don’t give director Chris Foggin a full roster of clearly delineated characters and succumb to a formulaic, underdog structure.

Fortunately, all members of the original band have cameos and are serve as consultants. Now, almost 30 years later, the Fisherman’s Friends still sing at the Golden Lion pub on the “platt” (harbor) in Port Isaac during the summer months.

On the Granger Movie Gauge of 1 to 10, “Fisherman’s Friends” is a salty 7, a gentle gem that’s filled with engaging sea shanties.

Until I streamed “Eurovision Song Contest: The Story of Fire Saga,” I’d never heard of the world’s biggest song competition. Neither had Will Ferrell until he saw it with his Swedish wife Viveca Paulin and decided to make a mockumentary about the bizarre show that famously introduced ABBA’s “Waterloo” in 1974.

While Farrell does his own singing, Rachel McAdams’s voice is blended with Swedish singer Molly Sanden, and Dan Stevens’ is dubbed by Sweden’s Erik Mjones.

Originally scheduled on Netflix in May to coincide with the 65th Eurovision Song Contest in Rotterdam, Netherlands, the annual competition was canceled due to the COVID-19 pandemic.

On the Granger Gauge, “Eurovision Song Contest: The Story of the Fire Saga” is an absurd 6, a campy comedy, filled with silly Nordic kitsch.

Filled with horrifying, unrelenting violence, it begins as a somber six year-old Jewish lad (Petr Kotlar) is abandoned by his parents in Eastern Europe. As he stoically wanders from village to village, he’s subjected to one grotesque atrocity after another from superstitious peasants as he tries to elude Russian Cossacks and the Gestapo.

In one segment of this odyssey, he’s buried up to his neck in dirt so crows can pick out his eyeballs. In another, he’s raped repeatedly by a pedophile who is, subsequently, eaten alive by rats. There’s sexual perversion, even bestiality. And as Jews jump off freight trains bound for concentration camps, they’re systematically gunned down and stripped of their goods and clothes.

Years after its publication, Kosinski’s uncompromising memoir was debunked by Polish authorities, who claimed his family — hiding as Christians under false names — had been sheltered by friends and that he was never handed over to the Nazis. Others claim some elements were lifted from the tormented childhood of his friend, Polish director Roman Polanski.

The title comes from a story about catching and painting the feathers of a tiny songbird; when it’s set free and returns to its flock, it’s considered an outcast, attacked and killed.

FYI: This film was the Czech Republic’s 2020 Oscar entry.

In Czech, German, Russian and Pan-Slavic Esperanto with sparse English subtitles, on the Granger Gauge, “The Painted Bird” is a barbaric, stomach-churning 4. Under no circumstances would I recommend it.

“Foxcatcher” (2014), directed by Bennett Miller is the riveting tale of Mark (Channing Tatum) and Dave (Mark Ruffalo), high-ranking wrestling brothers falling under the influence of John du Pont (Steve Carell), who was determined that they bring glory to the 1988 Olympics. In real life, John DuPont murdered Dave Schultz eight years after Mark Schultz lost in the Seoul Olympics. According to Mark Ruffalo, “John du Pont was repellent, so that’s the way they designed Steve Carell’s look. You never felt comfortable around him.”

“I, Tonya” (2017), directed by Craig Gillespie, examines the ill-fated rivalry between top figure skaters Nancy Kerrigan and Tonya Harding with Allison Janney winning a Best Supporting Actress Oscar as Tonya’s cruel mother. Although Margot Robbie trained extensively to play Tonya, she could not perform the triple axel, nor could her skating double, so that jump was filmed using visual effects.

“Jim Thorpe — All American” (1951), directed by Michael Curtiz, stars 36 year-old Burt Lancaster as the multifaceted Native American athlete who won medals at the 1912 games. FYI: Thorpe was not a full-blooded Native American since he was part-Irish on his mother’s side. Although Thorpe served as technical adviser, there are many errors, like depicting Glenn S. “Pop” Warner as an avuncular figure when, in truth, Warner betrayed Thorpe when Thorpe’s non-amateur status was discovered. The story combines athletic prowess and racial prejudice.

“Miracle” (2004), directed by Gavin O’Connor, celebrating the U.S. men’s hockey team, coached by Herb Brooks (Kurt Russell), that defeated all rivals to win gold at the 1980 Winter Olympics. Members of Team USA were chosen primarily for their hockey skills; acting ability was secondary. At the tryouts, one player greets the goalie, saying, “What’s up, you sieve?” In ice hockey slang, a sieve is a goalkeeper who allows too many shots to go into the net. The real Herb Brooks died in a car accident during filming, so there’s a dedication before the ending credits.

“Munich” (2005), directed by Stephen Spielberg, is a political thriller, based on Operation Wrath of God, chronicled in George Jonas’ book “Vengeance.” It’s the Israeli government’s secret retaliation against the Palestine Liberation Organization’s slaughter of 11 Israeli athletes at the 1972 Summer Olympics. The word “Sabra” is used several times, indicating a Jew who was actually born and raised in Israel.

“The Other Side of the Mountain” (1975), directed by Larry Peerce, based on the true story of ski racing champion Jill Kinmont (Marilyn Hassett), who suffered a paralyzing accident. As technical adviser, Kinmont spent three days on Mammoth Mountain, where many of the races were filmed; she was transported on a mechanical “snowcat” with her wheelchair strapped to the back. Olivia Newton-John’s song “Richard’s Window” during the concluding credits was Oscar-nominated as Best Original Song.

“Prefontaine” (1997), directed by Steve James, chronicling the life of the outspoken American long-distance runner Steve Prefontaine, played by Jared Leto. It was released one day before Steve Prefontaine’s 46th birthday. This was the first movie to relate his story; the second was “Without Limits” (1998) with Billy Crudup.

“Race” (2016), directed by Stephen Hopkins, who emphasizes that Jesse Owens (Stephan James) was sent to the 1936 Berlin Olympics as an American protest against Hitler’s Aryan supremacy/racist policies. This conventional biopic profiles America’s greatest track-and-field athlete. In 1990, when President George H.W. Bush posthumously presented the Congressional Medal, he acknowledged: “It was an unrivaled athletic triumph. But more than that, it really was a triumph for all humanity.”

Tickets go on sale Monday, July 20 at 10 a.m. for the latest in the Westport-Weston Chamber of Commerce and Westport Library Supper & Soul drive-in tailgate concert series. 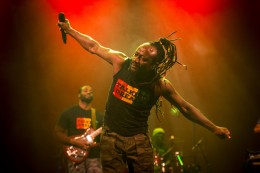 There will be two nights of entertainment at the Imperial Avenue Parking Lot on Friday, Aug. 7 and Saturday, Aug 8 at 7 p.m. featuring the Caribbean/reggae band Mystic Bowie - Talking Dreads.

The shows are a follow up to the July 5 first drive-in concert featuring the Tom Petty Project. Tickets are $125 per car, with a maximum of five persons per vehicle.

“What better music for a midsummer evening than Reggae” said Matthew Mandell, executive director of the Chamber. “With two shows more people will get to enjoy this fun and safe event, as we continue to bring music to Westport.” 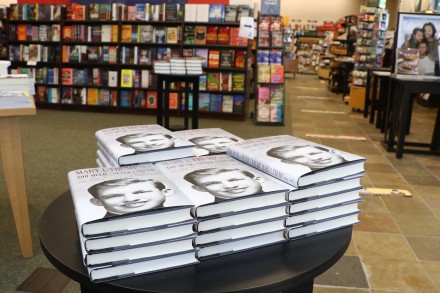 On the first day of availability for public sale, the latest Trump tell-all book, “Too Much and Never Enough,” authored by Donald Trump’s niece Mary L. Trump, is on display at Barnes & Noble, 1076 Post Road East. According to a B&N staff member, “We sold several copies in the first hour and have plenty of inventory since we expect high demand.” (CLICK TO ENLARGE) Dave Matlow for WestportNow.com

Andy, as she’s called, has been covertly battling the world’s evil for centuries — and she’s weary. But when she realizes that Nile (KiKi Layne), a gung-ho U.S. Marine, miraculously survived having her throat cut by a terrorist in Afghanistan, Andy convinces her to join the immortal crime-fighters.

There’s Booker (Matthias Schoenaerts), a veteran of the Napoleonic Wars, along with Joe (Marwan Kanzan) and Nicky (Luca Marinelli), who were combatants during the Crusades. Over the centuries, they’ve developed various battle strategies that they can instantly implement.

“Throughout history, we’ve protected the world, fighting in the shadows,” Andy explains. 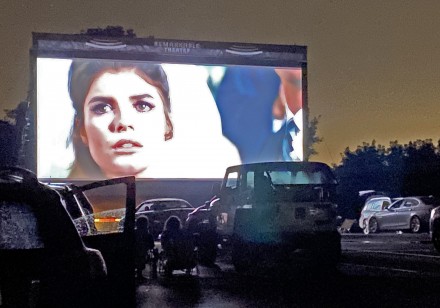 Viewers of the Remarkable Theater drive-in presentation of “The Graduate” at the Imperial Avenue Parking Lot tonight were unfazed by a 10-minute rainshower. (CLICK TO ENLARGE) Contributed photo 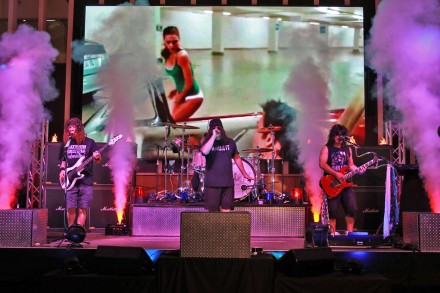 The Westport Weston Chamber of Commerce and the Westport Library on Saturday at 8 p.m. present the next Supper & Soul event—a streaming concert live from Library with the premier 80s tribute band Mullett. Members took the stage for a rehearsal tonight in the Library’s Trefz Forum to offer a representation of a live show. Tickets are available at https://www.westportwestonchamber.com/supper2/.  (CLICK TO ENLARGE) Contributed photo

The Westport Weston Chamber of Commerce and the Westport Library announced that their next Supper & Soul event will be a streaming concert, live from Library, on Saturday, July 11 at 8 p.m. with the 1980s tribute band Mullett.

To bring a sense of reality to this streaming show, this online only event will have the band take the stage in the Library’s Trefz Forum in full Rock N’ Roll garb to offer a representation of a live show, an announcement said;

“Live from the Library is our newest attempt to bring innovation to the arts scene,” said Bill Harmer, Westport Library executive director. “We are thrilled to host Mullett, who will be jamming everybody’s favorite tunes from the 80s with their spot-on performances, big hair, make-up, and big sound.”

“With Mullett in your house, what a perfect opportunity to have some friends over for an 80’s hair metal party outside,” said Matthew Mandell executive director of the Westport-Weston Chamber of Commerce.

Remarkable Theater announced today it has received approval for additional drive-in movies at the Imperial Avenue Parking Lot. Tickets are now on sale.

The next movie is “Mamma Mia” on Thursday, July 9. The 2008 film is based on the Broadway musical and features the music of Abba and stars Meryl Streep.

On Saturday, July 11, the movie is “The Graduate.”  Directed by Mike Nichols, the 1967 film stars Dustin Hoffman, Anne Bancroft, and Katharine Ross.

The screening is sponsored by Manna Toast, which is offering a $20 movie box that can be ordered in advance and picked up before the film.