People over the age of 65 or who have other health conditions should remain at home.

All facilities must prepare a detailed plan and training program for employees for reopening and appoint specific staff who are accountable for enforcing rules. 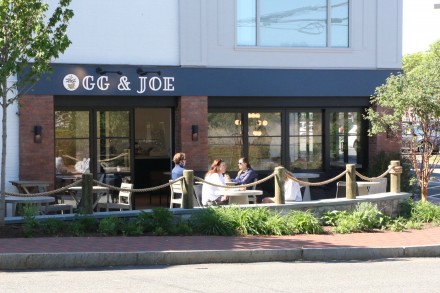 GG & Joe has opened at 165 Main St. (really on the corner of Parker Harding Plaza.) It is described as a coffee and acai bowl shop. For the uninitiated, the acadi bowl, originating in Brazil, is made of frozen acai palm fruit that is pureed and served as a smoothie in a bowl or glass. In Brazil, acai bowls are typically topped with granola, banana, and guaraná syrup. (CLICK TO ENLARGE) Dave Matlow for WestportNow.com 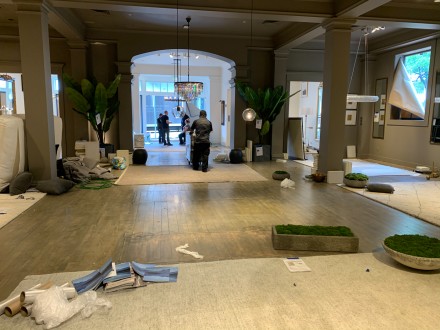 It was moving day today for Restoration Hardware, the upscale home furnishing store that has occupied the former Fine Arts Theatre building, 76 Post Road East, since 1999. A company spokesman said they are concentrating on much larger galleries, as they call them. Employees reportedly were offered jobs at RH in Greenwich. (CLICK TO ENLARGE) WestportNow.com photo

The Westport Weston Chamber of Commerce says the following restaurants have been approved for limited outdoor dining with another 12 to 15 in the pipeline:

Dino Sakakini, owner of Layla’s Falafel, the popular Middle Eastern cuisine takeout at 1535 Post Road East, wants Westporters to know how appreciative he is for their loyal support during the pandemic lockdown. 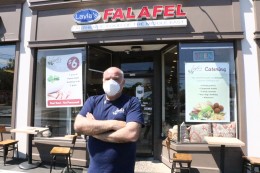 Dino Sakakini, owner of Westport’s Layla’s Falafel, is grateful for support of Westporters. (CLICK TO ENLARGE) Dave Matlow for WestportNow.com

“We never closed our business during this difficult time and have always been here for all customers,” he said.

“In turn, we thank Westporters for being here for us while we continue to try our best to be here for them.”

Sakakini said his business, although down by only 20-25%, “is much less than most local food service businesses — a wonderful endorsement of the generosity and loyalty of Westporters. We consider ourselves very fortunate.”

UPDATE Mike Fedell, manager of The Little Barn at 1060 Post Road East, finally got the news he was waiting for today around 3:40 p.m. 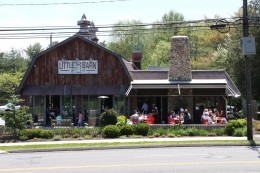 Outdoor diners at The Little Barn before the pandemic hit. (CLICK TO ENLARGE) Dave Matlow for WestportNow.com

Staring at empty tables since mid-March due to the coronavirus, his restaurant received Planning and Zoning Department approval to reopen outdoors.

“It feels good,” Fedell said. “We’ve been open a week-and-a-half doing take out, but with this we’re excited.”

Finally some good news: Westporters are getting a tax break.

After keeping the mill rate flat at 16.86 for four years in a row, the Board of Finance tonight unanimously voted to decrease it to 16.71.

That translates into $16.71 of taxes for every $1,000 of a home’s assessed value determined by the revaluation four years ago.

A prior motion by board member Lee Caney to reduce the rate to 16.81 failed by a 2 to 5 vote. But when Board of Finance Chairman Brian Stern proposed an even bigger cut as give back to the community in light of insurance and OPEB (other post employment benefits) savings, Caney was on board with the vote. 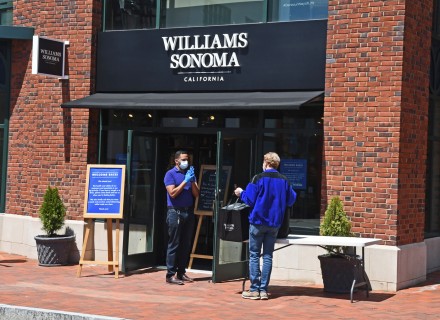 Williams Sonoma, 25 Church Lane, was among Westport retailers reopening today with a prominent “welcome back, we missed you” sign outside. But another sign in the doorway said: “Due to limited capacity restrictions we are taking appointments only.” (CLICK TO ENLARGE) WestportNow.com photo

UPDATE With the reopening of restaurants allowed beginning Wednesday, a number of Westport restaurant owners said they are ready.

Binicio Lanos (l) and his brother Sergio, co-owners of Arezzo, which will soon open its large patio on the Saugatuck River for outdoor dining. (CLICK TO ENLARGE) Jarret Liotta for WestportNow.com

But they still need the town’s authorization approved by various departments to begin serving. No application had been approved by end of business today, according to town officials.

“Hopefully everybody can come out and support us,” said Binicio Lanos, co-owner of Arezzo at the corner of Riverside Avenue and the Post Road, which is preparing to open its large patio overlooking the river.

“It’s feeling great,” he said, noting the capacity for the patio is regularly 150 patrons, plus they have additional qualifying space from inside with movable glass partitions.

The governor is getting squeezed from both sides of a new divide in politics: Connecticut was surprisingly unified on the question of closing schools and stores in the interest of public health, but Lamont’s incremental easing of restrictions, beginning May 20, are criticized as both too much and too little.

“I appreciate the ongoing concern that people have, but I think we’ve got the right balance going forward,” Lamont said today. “Right now, I think you have a sense we put public health and public safety first and foremost. And whatever we do, we’re doing very cautiously.”

Democratic state senators, including two who have appeared with Lamont at his daily briefings on the COVID-19 pandemic, released a letter today challenging whether the state is ready for what Lamont calls “baby steps” to a new normalcy.

“Reopening is essential – but to do it while the first wave of the pandemic is still raging will not lead to a second wave, it will simply add fuel to the first wave, delaying our eventual recovery,” wrote the nine lawmakers.