The Partnership for Connecticut has invited the public to the first “organizational meeting” of its governing board on Oct. 18, but it’s unclear what portion of that meeting — or subsequent meetings — will be open, or what the board will be discussing.

The new partnership and its board — a private, nonprofit organization created to carry out a public-private collaboration between the state and Dalio Philanthropies — has been the subject of controversy since lawmakers exempted it from state disclosure and ethics rules even though taxpayer money is being used in the endeavor. Dalio Philanthropies is the philanthropic arm of Ray Dalio, founder of Westport’s Bridgewater Associates.

Andrew Ferguson, a senior staff member at Dalio Philanthropies, declined through a spokeswoman to be interviewed today.

The spokeswoman instead issued a statement from the partnership saying, “As with all nonprofit boards, portions of Partnership board meetings will happen in closed executive session.” 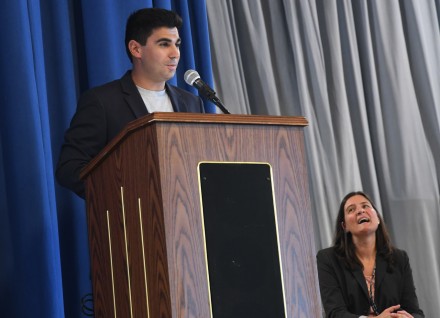 Westporter James “Jaime” Bairaktaris today addresses students and educators at Redding Elementary School where he was honored as the 2020 Anne Marie Murphy Paraeducator of the Year. Bairaktaris, 21, a 2016 Staples graduate who works at the school five days a week, was selected from among 14,000 nominees, said Commissioner of Education Miguel A. Cardona, one of a number of state and local officials on hand to honor him. When he is not teaching at the school, where he was a student, Bairaktaris is a Westport EMS crew chief, dishes out ice cream at Westport’s Saugatuck Sweets, and is a WestportNow contributing photographer. Pictured with him is Redding Principal Natalie Hammond, a survivor of the Sandy Hook shootings and a friend of Ann Marie Murphy, a special education paraprofessional who lost her life during the Sandy Hook tragedy. There will be a state ceremony for Bairaktaris in December. (CLICK TO ENLARGE) WestportNow.com photo

A long-awaited facilities report will keep people waiting a little longer, as the Board of Education is not sure how much it can share because of security issues, nor how long it might take to analyze it. 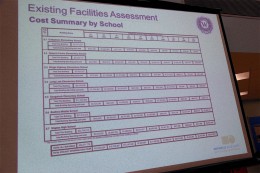 A slide details projected 10-year costs—totaling $96 million—for repairs at the seven school buildings, not including Coleytown Middle School, which is undergoing a $32-million renovation project. (CLICK TO ENLARGE) Jarret Liotta for WestportNow.com

But in an abbreviated presentation Monday night, Michael LoSasso, an architect with consultant Antinozzi Associates, said the town’s seven schools — barring Coleytown Middle School (CMS) — warrant around $96 million in repairs over the next 10 years.

LoSasso was quick to qualify the figure, noting that some of those repairs may have already been addressed or budgeted as part of other projects, and that the figure took into account inflation over the next 10 years, as the costs would be incurred.

“Many of them can be deferred,” he said of the work, which includes re-tiling, new ventilator units, roof repair, mechanical systems, paving, electrical systems and more.

Frank words from Superintendent of Schools David Abbey drew admiring applause from parents — as well as some apologies from the Board of Education (BOE) Monday night — when he criticized its handling of the redistricting issue aimed at bringing balance to the two middle schools. 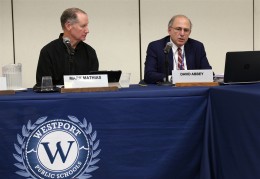 BOE Chairman Mark Mathias (l)  listens to Superintendent of Schools David Abbey voice his frustration with having felt handcuffed by the board.  (CLICK TO ENLARGE) Jarret Liotta for WestportNow.com

“I feel like you put handcuffs on the administration and then you asked us to play the violin,” he told the BOE, “and then you’re surprised that it’s not a beautiful sonata (and) then you ask us, ‘Why did you put on handcuffs?’”

Abbey then drew applause when he called a continued look at the most current redistricting scenarios “a fool’s errand” and said it would lead down a path “which is unsatisfactory educationally.” 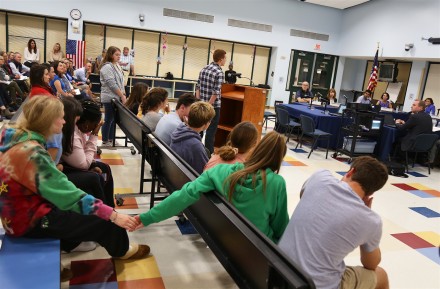 Two students hold hands for support during what were some very emotional statements made by students to the Board of Education tonight about fired Staples High School student outreach counselor Ed Milton. More than a dozen students showed their support for Milton, noting that while he was not a Board of Education employee, he worked for the town, He was allegedly let go following an outburst in which he cursed at a student. “Ed didn’t deserve to leave like this,” said student Nicholas Stamoulas, 16, who like others opined that he never had a chance to put closure on the important relationship they had developed at school. Students and parents said Milton offered care and support for a range of social and emotional issues that were not addressed in the classroom. (CLICK TO ENLARGE) Jarret Liotta for WestportNow.com

In a rare public hearing tonight, the Board of Education listened to — and subsequently rejected — a grievance from a Staples High School (SHS) secretary in relation to her job level as it corresponds with her responsibilities.

Karen Romano, a 29-year veteran of the Westport Public Schools, who serves as executive assistant to the SHS principal, filed a grievance through her union to be moved from a Category IV (or Level 4) to a Category V (Level 5) position.

“We believe she’s not classified properly,” said union representative Dan Bonfiglio, who noted her responsibilities have increased greatly in her role, which now includes numerous hours organizing the graduation ceremonies.

“She’s performing work of a Category 5 secretary,” he said.

The resolution also states that in doing so, an RFP, a request for proposals, should be issued for the school board to find other legal representation.

The vote shores up the Board of Selectmen’s unanimous vote on Sept. 16, when it asked the Board of Education to drop Shipman & Goodwin.

Mark Mathias, school board chairman, said the matter would be on addressed at a special Board of Education meeting on Monday, Oct. 14.

Andrea Dutton, a 1991 Staples High School graduate, has been named a 2019 MacArthur Fellow—the so-called “genius” awards. Recipient of a $625,000 no-strings attached award distributed over five years, Dutton is a geochemist and paleoclimatologist investigating changes in sea levels and ice sheet mass. She is the second Staples 1991 graduate to receive the prestigious award. Photographer Lynsey Addario received the award in 2009. (CLICK TO ENLARGE) MacArthur Foundation photo

Vaping is an epidemic among young people and education is the key to combat it, an expert on the subject told a Town Hall meeting tonight. 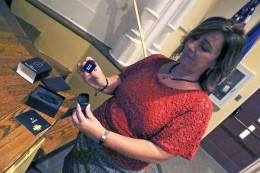 “They’re gonna do what they want to do,” said Tricia Dahl, senior researcher with the Yale School of Medicine’s Tobacco Research Center in Youth, who also has two children. “It’s everywhere.”

The session, “Vaping: The Youth Epidemic,” was sponsored by the Department of Human Services, Westport Prevention Coalition, and collaborating partners. About 80 people of all ages attended.

This article was produced through a partnership between ProPublica and the Connecticut Mirror, which is a member of the ProPublica Local Reporting Network.

Westport — For much of the past 13 years, attorney Timothy Hollister has battled local elected officials here on behalf of a developer who wants to build more affordable housing in one of America’s wealthiest towns. 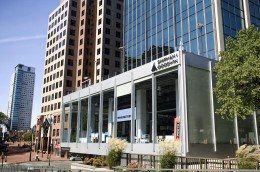 The law offices of Shipman & Goodwin. Westport’s leaders have requested the Board of Education sever its more than 30-year relationship with the law firm. (CLICK TO ENLARGE) Monica Jorge for CTMirror.org

The fight, he has said, is a microcosm of a statewide debate in Connecticut, where exclusionary zoning requirements have resulted in some of the most segregated neighborhoods in the nation. Private developers have been allowed to open just 65 affordable housing units in this posh village over the last three decades.

“Does anybody say we need to keep blacks and Hispanics out of Westport? No, but they talk about property values, safety and preserving open space — all the things that a town can do to prevent development that would bring up a more economically and racially diverse housing population,” Hollister told the Connecticut Mirror and ProPublica in May, as part of an investigation into the state’s housing practices. “They don’t use the overt racial terms, but it’s absolutely clear to everybody in the room that’s what they’re talking about.”

Citing the attorney’s “inflammatory and insulting” remarks, as well as other actions he had taken on behalf of his client, town leaders voted to request that the local Board of Education sever its 30-plus-year relationship with Hollister’s firm, Shipman & Goodwin. That contract is worth more than $200,000 annually to the law firm.