Insurance proceeds of $562,367 for prior mold remediation at Coleytown Middle School (CMS) will go into the town’s general fund, not the schools’ carryover account as the Board of Education requested.

That was the unanimous decision of the Board of Finance tonight.

“The carryover account shouldn’t be the mold account,” Board of Finance Chairman Brian Stern said before the board’s vote approving an amendment for the funds to go into the general fund.

“Have the carryover account stand on its own two feet,” he added.

After more than three hours of back and forth and some RTM members saying they were torn over which way to vote, the legislative body failed by four votes to reach a 70 percent supermajority to overturn the recent Board of Finance denial.

The RTM voted 19 to 13 with 1 abstention in favor of an $185,000 appropriation to hire the SROs via the Police Department’s overtime account.

The vote was a blow to town and school officials, who had spent many months advocating for the stepped up security measures.

A shortage of space at Bedford Middle School (BMS) has some parents demanding immediate action, but the Board of Education said tonight it wanted more firm data before making decisions on next steps, including purchasing portable classrooms. 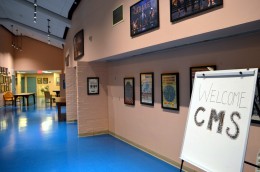 Several parents stated that frustrations were on the rise among parents whose children are currently attending BMS.

The school has taken in about 300 students from Coleytown Middle School (CMS) in grades six and seven for at least the next month because of air quality issues at CMS.

The Westport Board of Education held an unusual Sunday afternoon meeting at Town Hall today to discuss long-term priorities and — simultaneously — recognize it has a lot going on. 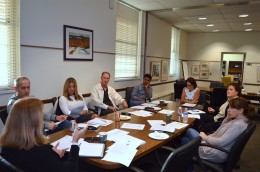 The Board of Education meeting in Sunday session. (CLICK TO ENLARGE) Jarret Liotta for WestportNow.com

The untelevised 5 p.m. special meeting had an informal flavor that featured minimal public attendance and pizza.

But the seven members and Superintendent of Schools Colleen Palmer focused on how much was already on their plates and how a litany of issues, ideas and implementations might affect the year ahead.

“The workload on this team is at maximum level,” Palmer said of her staff, in part due to the current relocation of Coleytown Middle School students following a mold and air quality crisis in the building. 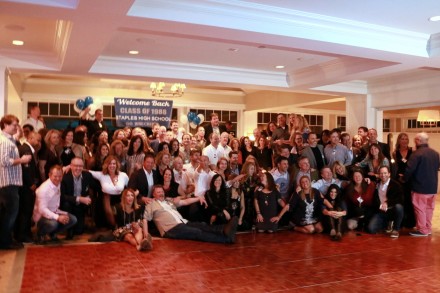 Members of the 1988 Staples High School class had a weekend of activities to celebrate their 30th anniversary, including an evening at Birchwood Country Club. (CLICK TO ENLARGE) Contributerd photo

A certificate from the school and National Merit Scholarship Corporation was presented to the students who represent almost every academic area of interest and involvement in student activities offered at Staples High School. 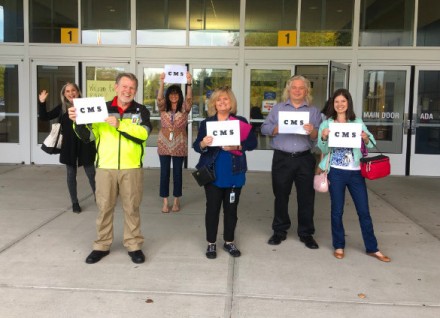 Westport Superintendent of Schools Colleen Palmer tweeted this photo today showing Coleytown Middle School (CMS) staff welcoming CMS students to Bedford Middle School. More than 500 CMS students are being displaced while evaluation is underway of air quality issues at their school. Welcome signs were evident at Staples and Bedford on the first day of new schools for the CMS students. (CLICK TO ENLARGE) Colleen Palmer/Twitter.com photo

Students at Westport’s Coleytown Middle School (CMS), shifting to Bedford Middle School and Staples High School on Monday, can pick up their belongings at CMS today. 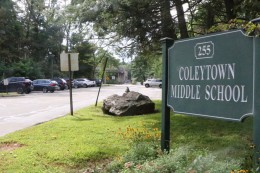 “CMS students can pick up items from lockers and their musical instruments tomorrow, Sunday, from noon to 6:00 p.m.,” Superintendent of Schools Colleen Palmer said in a tweet Saturday night.

The school is being closed for at least a month while mold and other air-quality issues are being evaluated.

Palmer had said previously that the CMS students on Monday will have shortened schedules. 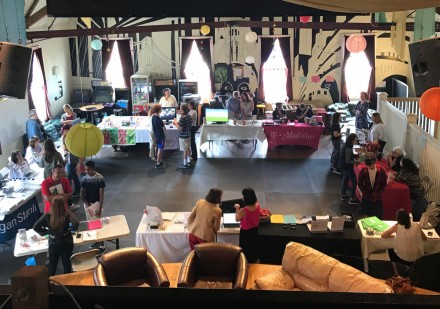 Local college-bound students had the chance today to meet academic tutors and college counselors from around Fairfield County at an open house meet and greet sponsored by the Westport Library at Toquet Hall. (CLICK TO ENLARGE) Contributed photo

The Board of Education tonight gave unanimous approval to Superintendent of Schools Colleen Palmer’s plan to move Coleytown Middle School (CMS) students to Bedford Middle and Staples High Schools for about a month while the CMS is investigated for toxicity. 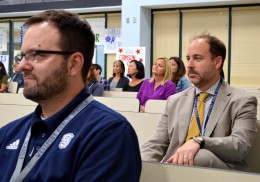 On the spot: Principals James D’Amico of Staples (l) and Adam Rosen of Bedford Middle School explained how their schools would accommodate the CMS students and staff. (CLICK TO ENLARGE) Jarret Liotta for WestportNow.com

A range of opinions and emotions were expressed by parents at a special meeting, the second in two days, from CMS parents who praised the plan, to Bedford parents who expressed opposition, to one CMS father who vehemently claimed the school officials had “abandoned” the children by failing to act sooner and had shattered trust.

CMS was shut down this week following extensive complaints of illness among staff and students. Questions remain whether mold growth is impacting its environment, or whether remediation practices themselves could be affecting air quality or causing symptoms that have included dizziness, nausea, itching and headaches.

“This is a trust issue,” said Harris Falk, who was declared “out of order” and cut off while he was addressing the board.