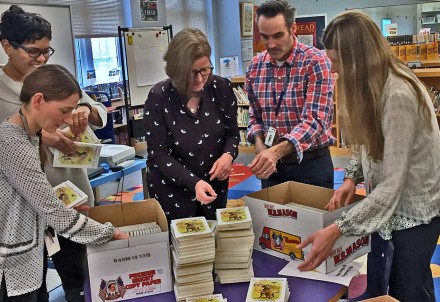 Members of the Kings Highway Elementary School PTA pack books from their One Book, One School reading initiative to be donated to the Luis Munoz Elementary School in Bridgeport. The project involved every family receiving the book “Gooseberry Park” to help promote reading at home with family members. The school’s literacy team then asked the families to consider donating their gently used books back to the school so they could be donated. Pictured (l-r) are Tracey Carbone, Kisha Canady, Cheryl Smith, John Brakeman and Tara Doyle. (CLICK TO ENLARGE) Contributed photo

In the throes of budget season, it wasn’t business as usual but business unusual tonight for Westport’s Board of Finance as it grappled with planned state cuts and eleventh hour costs totaling about $8 million.

After hearing public input at the special meeting and following much deliberation in an executive session, the board agreed that the total town and school proposed budget of $206 million for 2017-18 should be decreased by $3.5 million.

That way, budgets would be in place by the start of fiscal year beginning July 1, said Brian Stern, finance board chairman. And if the remaining $4.5 million actually hits when the state’s budget in finalized in September, the finance board would revisit the budget — and a modest tax increase is likely.

The reason for all the uncertainty? Gov. Dannel P. Malloy has proposed that municipalities pay one-third of teacher pensions, a potential liability translates into an extra $5.9 million per year here, $8 million when tallied with $2.1 million in state cuts to Westport for next year. 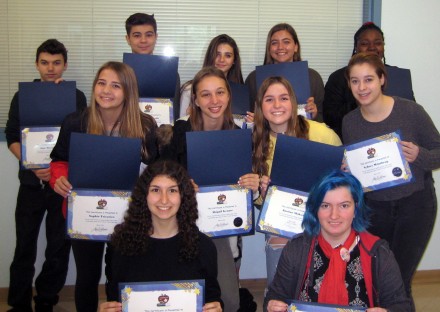 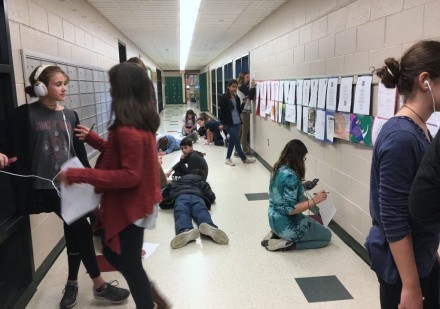 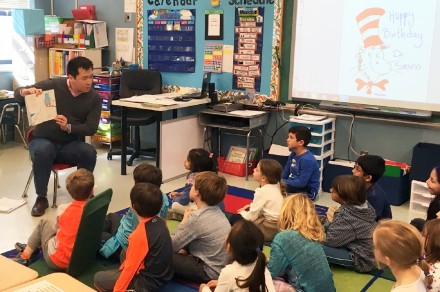 Students from Jane Garard’s first grade class at Coleytown Elementary School today celebrate the 16th annual National Education Association’s (NEA) Read Across America Day with Don Rebar, Westport Country Playhouse’s associate director of marketing, as he reads them Dr. Seuss’s “The Cat in the Hat.” The Read Across America program is an annual reading motivation and awareness program that calls for every child in every community to celebrate reading on March 2, the birthday of children’s author Dr. Seuss. (CLICK TO ENLARGE) Contributed photo

Westport Board of Finance Chairman Brian Stern said tonight that a “modest” tax increase is likely despite the fiscally responsible proposed town and school budgets. 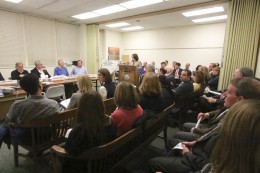 There was a full house for tonight’s Board of Finance meeting with some town employees and others forced to watch on TV in the Town Hall lobby. (CLICK TO ENLARGE) Dave Matlow for WestportNow.com

“I do think we will have a modest tax increase in the fall,” he said after hearing details of the budgets tonight.

The reason? Stern only had to point to Hartford, and harsh words flowed.

“Hartford should quit asking us to fill the gap for their own ineptitude,” Stern said about Gov. Dannel P. Malloy’s plan for towns to pay one-third of teacher pensions. 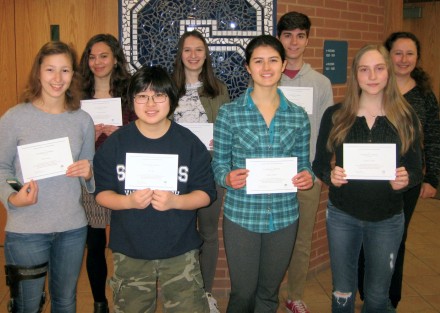 The zero-to-100 grade the state gives every public school and district each year declined for the vast majority of public schools and districts, according to data released today by the State Department of Education.

But the state’s education commissioner said the widespread declines in scores should be seen as part of a recalibration of the grading system. The majority of students scored better on standardized tests.

The state’s grading system is based on more than a dozen different measures, including factors such as test scores and how many students are chronically absent, enroll in arts and Advanced Placement college-prep courses, graduate from high school and enroll in college within a year of graduation.

Greens Farms Academy’s Head of School Janet Hartwell says she will retire from the Westport-based independent school in June 2018.

“These years at GFA have been so deeply rewarding for me, professionally and personally,” she was quoted as saying in a school news release. She is now in her 14th year at the PreK-12 co-ed day school on Beachside Avenue.

Last year’s graduating class named Hartwell as an honorary “lifer” — a term for students who attend the school from kindergarten through to 12th grade — having started with them back in 2003.

“One of the great joys of working with our students is to watch them grow and develop at GFA, finding their voices, passions, and their sense of self,” Hartwell said.

The Westport Public Schools will have “a more accessible user friendly domain name,” Schools Superintendent Colleen Palmer announced at the Board of Education meeting tonight.

Palmer also took the opportunity to weigh in on gender identity issues that are at the forefront nationally and statewide as it pertains to transgender students.

“This district has always been a leader,” she said about its acceptance of students from diverse backgrounds. “...We are not changing any of our practices.