WestportNow welcomes letters from readers on matters pertaining to Westport and Westporters. Those of 300 words or less are given preference. Letters are edited for grammar, clarity, and accuracy. Publication shall be at the sole discretion of WestportNow. Third-party or anonymous letters, those signed with a pseudonym, or letters appearing in other publications are not published. WestportNow does not publish letters endorsing or opposing any political candidates.

A postal address, e-mail address if available, and day and evening telephone numbers are required for verification purposes, although this information is not published. Letters may be submitted by e-mail to [email protected], via fax at (203) 286-2099, or by mail to 150 North Ave., Westport, CT 06880.

If an event charged by race, color, religion, or sexual identity it would be discriminatory and not allowed.

The family before me, with one grandparent, two parents, three kids and two dogs paid $25. That’s $4.17 per person.

Why do I pay more because I am single. VERY DISCRIMINATORY. I’m very disappointed in the town where I grew up.

In February I wrote about our community. Since then, we’ve seen changes, things are being built and torn down, and many are afraid.

However I noticed today from a deli window an emerging paradigm; that many confuse the physical “town,” with the community who lives within it. The town is the Ruth Steinkraus Cohen Bridge, while the community is the Adult Diplomats or the teenage students standing on that bridge — both taking selfies with the JUNe Day Flags.

I see this community from many angles. I notice often how we’re learning from each other and helping each other. We’re developing and growing as the town does, while staying comfortable and near as a community.

We worry about the future of our community, but I’ve noticed that our future is bright.

The new parking regulations along Hillspoint Road are unneeded and arbitrary in the extreme.

In addition to the problems created for homeowners along this stretch of road, the signage is confusing.

Cars can only park along this stretch of Hillspoint Road adjacent to beach access with a proper beach sticker.

However, there are also signs that designate 15-minute parking. Is that with or without a beach sticker?

Last night the RTM unanimously voted to approve the schools budget for 2018/19. Spending is increasing in our schools by over 1.5 percent.

Congratulations to all the players involved: Board of Finance for their strength; The RTM for their excellent focus and attention to detail; PTA for their continuing oversight; Teaching unions for reaching a win-win deal — and finally the Board of Education for their commitment to our children.

At the start of this process the requested school budget represented a growth rate of almost 5 percent — the largest increase in several years. Head count was going up and the growth rate in per student spending was more than doubling. The budget needed taming.

Westport will be spending $21,042 per student next year. Every child can thrive with that generous spending commitment.

Last year at this time those of us trying to restore the school budget from cuts had over 1,000 signatures on their petition. By the end of the successful campaign we had over 2,300 names.

The community helped to secure a successful, but rare, super majority vote at the RTM. The margin was two votes. Our arguments included having a new superintendent, keeping head count flat, and a modest 2 percent increase in the cost per student. RTM Education and Finance Committees unanimously recommended restoration.

A year later — I stood up in the Board of Finance this week, and supported the motion to reduce the 2018/19 schools budget by $2,050,000. It passed. The Board Of Education (BOE) will be discussing its next steps on Monday. Will they ask for a restoration?

This year I will not be supporting any restoration request. Others might.

Serving the people of Westport and nurturing the education of our children is an honor and a privilege for each of us on the Board of Education. The events of Feb. 27 have given us an even greater appreciation for the strength and unity in our community.

We are filled with enormous gratitude that our children are safe. Thanks to the preparedness and professionalism of our administrators, teachers and first responders, our children went safely home on Tuesday — and returned to school safely on Wednesday morning.

We are especially grateful to our Superintendent, Dr. Colleen Palmer, who has focused intensely on school security and student safety from the first day of her tenure. And thank you to her enormously effective central office team. We are confident that in the coming days Dr. Palmer will lead us successfully in our efforts to review, reinforce and continue to improve our security plans and infrastructure.

Thank you to our Chief of Police Foti Koskinas, Fire Department Chief Robert Yost and to all our first responders. Their skill and commitment are always impressive and were on full display in their rapid and effective response to events as they unfolded on Tuesday.

I was at work when I found out something had happened yesterday: “Hey, what’s going on in Westport?” someone texted. My heart dropped.

The last time I got a text like that, I was a freshman at Staples, sitting in the library, and the Newtown shooting has just occurred.

Now I’m a sophomore in college, sitting at my desk, and Westport is the subject. Today “close to home” became “home.”

Those are my friends, those are my teachers, and this is my town — our town. I’m angry that it hit home.

Red, white and blue bunting and balloons, a Police and Fire Department color guard and a stirring rendition of the national anthem sung by the Staples High School Orphenians kicked off tonight’s Westport’s oath of office ceremonies in a packed Town Hall auditorium. 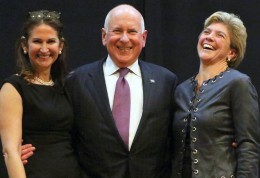 “This is really a special moment for so many who worked to be elected to public office in Westport,” said Republican First Selectman Jim Marpe, sworn in for his second four-year term. “I congratulate you and look forward to governing with you.”

Marpe, who turned 71 last month, pledged that this term would be marked by “inclusiveness.”

“We will be committed to representing each and every Westport resident,” he told the audience.

Yesterday I was saddened by the loss of the cement owl that sat at my husband’s grave, and today I must report that my heart has been lightened by the kindness of a stranger (who is now a friend).

I received a call last night, right after I sent my letter to the editor at WestportNow, from a lovely lady who read my note and without hesitation, ordered an owl online to replace Stan’s little friend.

It was a gesture that renewed my faith in people when I thought it was lost, at a time when everyone seems to be completely self absorbed.

We, and I include myself, should never forget that good will ALWAYS outweigh the bad.  I am so lucky to live in a town that has people that still care about their neighbors. Thank you Jena, for renewing that faith.

It pained me greatly today when I visited my husband’s grave in Willowbrook Cemetery to find his little cement owl, who sat on his tombstone, had been taken. How and why anyone would do such a thing s beyond me. It was not expensive, just a little “friend” to watch over him.

I am heartbroken at the loss. If whoever took it reads this and would like to put him back where he belongs, I would be very appreciative.

What does this say about our society that nothing is sacred anymore.