At the request of Westport First Selectman Jim Marpe, Gov. Ned Lamont has given permission for the town to lower its flags to half-staff for the remainder of the week in honor of Gordon Joseloff, 75, who died today. 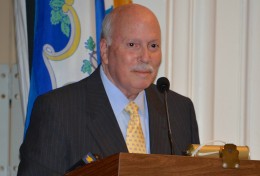 Gordon Joseloff, on Nov. 19 ,2013, when turning over the reins as First Selectman to his successor James Marpe. (CLICK TO ENLARGE) Helen Klisser During for WestportNow.com

Joseloff, Marpe’s predecessor and publisher of WestportNow.com, had been in hospice care for a couple of weeks at home, suffering from a rare blood cancer he had been diagnosed with three years ago.

“On behalf of all Westporters, I want to express the Town’s sincere condolences to his daughter, Anne-Liisa, and his son, Ben, and to his grandchildren who I know he adored,” Marpe said. “We will all miss Gordon, and we thank him for his friendship and his service to Westport.”

“Gordon’s commitment and dedication to Westport, his hometown, was exemplified in so many ways,” Marpe said.”

Dorothy B. Keplesky, a native of Bayside Queens, NY and a former resident of Westport, died Nov. 6, 2020 in Virginia Beach, VA. She was 93. She was preceded in death by her husband, William F. Keplesky, Sr. and parents, Harry and Mabel Bendelow of Bridgeport.

Dorothy was a long-time resident of Westport and worked as an executive secretary at Greens Farms Academy and was one of the first parishioners of St. Luke Catholic Church. While later residing in Wilmington, NC, she was an active volunteer in the community, supporting Meals on Wheels and the New Hanover and Cape Fear Hospitals. She was also a Eucharistic Minister at St. Mark Catholic Church. She and her husband relocated to Hampton Roads, VA in 2015 to be near family.

A private funeral mass and burial next to her husband at Assumption Greens Farms Cemetery in Westport will be held in the future. Donations in her memory can be made to the Norfolk Botanical Garden in Norfolk, VA.

Rafael was born in Mexico City, Mexico on Oct. 6, 1950. His father, Rafael C. Laredo, was Cuban, and his mother, Ann (Duncan) Laredo, was American. Known as Rafa, he grew up in Mexico, Cuba, and Chile, moving to Westport in 1964. He graduated in 1968 from Staples High School , and earned a bachelor’s degree in engineering from the University of Hartford, CT. Over the years he worked for AVCO Lycoming in Stratford, CT and Teledyne in Houston, Texas. Later, he owned Alloytek Metallurgical Services in Daphne, AL, and was employed by Jet Parts Engineering.

Rafa and his wife Vicky (Pasternak) settled in Daphne, AL in the early 1980s. Vicky predeceased Rafa in 2019. Rafa loved sailing on Mobile Bay with his friend Dennis Hawkins. He belonged to Fairhope Yacht Club.

Martha Aasen, the Mississippi-born steel magnolia credited with the Westport’s Democratic Party’s renaissance during the 1990s, died today at Norwalk Hospital from heart failure following a fall last weekend. She was 90.

During her tenure as chairwoman of the town’s Democratic Town Committee (DTC)—the first woman to hold the post – Aasen was front and center in Westport during visits from President Bill Clinton, Hillary Clinton and myriad party heavy hitters.

Revered as the power behind the party, she received the Silver Donkey Award from the Westport Democratic Women and was later credited with a town wide turnout of 87.9% of Democratic voters in 2000, according to the late local writer Woody Klein.

During her time in Westport, where she and her husband Larry Aasen moved in 1963, she was also active in international affairs, working in public relations for the UN, and later as director of technical assistance for International Executive Service Corps in Stamford.

Helene was born in Stamford on Nov. 20, 1924 and is the daughter of the late John and Agnes Wadejko.

She was the owner of the Arrow Restaurant in Westport for many years and remained very active in the Westport community even after the restaurant closed. Helene loved sewing, golfing, and traveling.

Bruce Courcier of Falmouth, Massachusetts died Oct. 11 at his home after a courageous battle with cancer. He was 70.

He married Carol Lynn (Thompson) Courcier in 1979, who survives him. Together for 45 years, Carol Lynn was his partner and best friend. Bruce was a dedicated husband, father, and grandfather. He is survived by his son Robert Courcier, grandson Thompson Courcier, daughter Sarah Courcier all of Martha’s Vineyard, daughter Caity Crowley and son-in-law Joe Crowley of Rhode Island.

He will be remembered by his love and devotion to his family, from hockey practice car rides to hours spent watching his daughters figure skate.

He was born to parents Robert and Dorothy Courcier on Nov. 15, 1949 in Norwalk. Bruce grew up in Westport and graduated from Staples High School. He had fond memories of his early life in Westport, boating on Long Island Sound and attending Mets games at Shea Stadium. He loved riding and racing motorcycles and going fast.

Constance Mary Florence Ippolito, wife of Andrew Vincent Ippolito of Westport, died Oct. 18 at her home. She was 89.

Constance was born in Astoria, NY. She is the daughter of the late Paul and Vincenza (Perno) DiMitro. She received her nursing degree from Flowers 5th Avenue in NYC and her Masters degree in Early Education from Queens College. Prior to retiring and moving to Westport with her children in 2005, she owned and operated the Happy Time Nursery in Bayside, NY for almost 40 years.

She is survived by her husband Andrew; her children Jenette, Andrew, Paul, Michael, and Paul’s wife Lisa; her grandchildren Vanessa and Steve, Andraya and Keenan, Andrew, Dimitra, Sofia, Michael, Paul, Christofer, and Lucas; her great grandchildren Daniel, Cosette, Keenan, and Charlotte. She is also loved by her sisters Mary Morrisette and Linda Benner and many cousins, nieces, and nephews.

Constance was an incredible woman and was the heart of our family and touched the lives of everyone she met.

David Jeffrey Nachman died Oct. 8 at home in Westport, He was 65. Born in Augusta, GA, he was a resident of Westport for 55 years.

He was employed by Penske Automotive (Audi) of Fairfield for 25 years as a sales specialist. He graduated Staples High School in 1974 and went on to Drew University in Madison, NJ, where he earned a BS in economics. He was a member of the Drew Soccer team. David was an avid musician and enjoyed playing his guitar and writing original songs which he often recorded in his home studio. He was also fond of bicycling and jogging.

He is survived by his wife of 36 years, Martha Welsh Nachman of Westport, his mother Patricia Hooper of Westport, his father Herbert Nachman of Townsend, TN, and two sisters, Dorothy Claire Brooks of South Lake Tahoe, CA and Serene Nachman White of Oak Ridge, TN. He has three children, Kiera Nachman Kent of Ridgefield Park, NJ; William (Billy) Nachman of Chicago, IL, and Victoria Nachman of New Orleans, LA. He is also survived by two grandsons, Liam and Ezra.

Friends may leave messages for the family at www.hardingfuneral.com. Burial arrangements will be announced at a later date.

George H. Batchelder of Santa Rosa, CA, died October 7 after a long battle with cancer. He was 89.

George was born on June 16, 1931 and raised in Berkeley, California. He spent his early years boating and fishing on the San Francisco Bay with his family.

He received his BS in Chemistry from UC Berkeley. Several years later he met Laurie, his wife of 60 years. After serving in the Army in Korea, he joined Stauffer Chemical Company in Richmond, CA as a research chemist. George worked for Stauffer his entire career. He relocated the family to Westport, CT in 1967 for a new position and ended his successful career as the company’s Employee Compensation and Benefits Director.

In CT, George and Laurie settled into a life focused on raising their family. He was a dedicated and devoted husband and father and an active member of the United Methodist Church of Westport. George also enjoyed sailing and instilled his enthusiasm for being on the water with the entire family. He never lost his love of sailing, maintaining his own sailboat well past his 80th birthday.

Ivo Milan Klima M.D., a resident of Westport and previously of Armonk, NY, died Sept. 26 at home. He was 93.

Born in Prague, Czechoslovakia, Dr.Klima was educated at Charles University in Prague. He and his family immigrated to the US during the communist era.

Dr. Klima practiced Obstetrics and Gynecology at Northern Westchester Hospital. He was beloved and respected by his patients and colleagues.  Dr. Klima loved classical music, art, books and travel. He was loved by many.