Former Westporter Briggs Swift Cunningham Jr., the captain of the winning yacht in the 1958 America’s Cup and a longtime sports car racing figure, has died. He was 96.

Cunningham lived in Westport for many years before moving to California in the 1960s and then to Nevada in 1999.

His survivors include daughter Lucie McKinney of Westport, widow of Stewart B. McKinney,  the Republican congressman who represented the area for 17 years before his death in 1987.

Now Lucie Bedford Cunningham Warren, she continues to live in Westport as does her sister Ruth Thomas Bedford. The Bedford family has a long history of philanthropy in Westport, having donated substantial amounts of real estate and development funds to build the YMCA and schools.

Cunningham pursued yachting and auto racing with a fortune inherited from his father, a wealthy Cincinnati financier and early investor in Procter & Gamble.

He was the captain of Columbia when it won the America’s Cup.

Later, he was active in competitive sailing at Westport’s Cedar Point Yacht Club and the Pequot Yacht Club in Fairfield.

Fellow yachtsmen recall the lavish parties Cunnigham threw at his Green’s Farms area home following the races.  They often included bagpipers, in accord with his Scottish heritage.

His name became part of sailing terminology through his 1958 invention of the “cunningham,” a line controlling sail tension.

Other survivors include a son, Briggs Cunningham III, of Danville, Ky., and daughter Cythlen Maddock, of Palm Beach, Fla.

A funeral is scheduled Aug. 8 in Corona Del Mar, Calif. 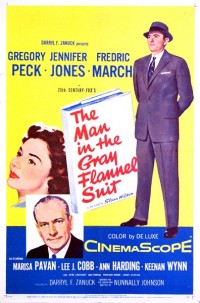 “Man in the Gray Flannel Suit” movie poster. (CLICK TO ENLARGE) Contributed photo
Sloan Wilson, the Norwalk-born author of the 1955 bestseller “The Man in the Gray Flannel Suit,” which was set in Westport and later became a hit film starring Gregory Peck and was partially filmed in Westport, died Sunday after a long illness. He had turned 83 on May 8.

He died in Colonial Beach, Va., and had suffered from Alzheimer’s disease, according to The Free-Lance Star in Fredericksburg, Va.

Wilson wrote “The Man in the Gray Flannel Suit” while working at Time-Life Inc. and was based on his experience with corporate culture at the publishing firm.

The novel portrays young executive Tom Rath’s struggles with his conscience as he tries to get ahead and provide for his social-climbing wife.

Longtime Westport resident Dr. Judianne Densen-Gerber, a lawyer and psychiatrist who gained notoriety for founding a drug treatment program in New York and went on to give widely quoted but sometimes disputed testimony on subjects like child abuse and pornography, has died at the age of 68.

An obituary in todays New York Times notes Densen-GerberҒs often-controversial background, including her becoming a conspicuous figure at public hearings, society balls, and ghetto demonstrations with her bouffant hairdo, rhinestone-studded glasses and cigars.

The cause of her death was cancer, said her daughter Dr. Sarah Baden, who said her mother had traveled to New York for Mothers Day Sunday where she died. Densen-Gerber had been a Westport resident since the mid-70s.

Geoffrey K. Ferguson, a former Westporter convicted of killing five people at a house he owned in Redding in 1995, took his own life today by strangling himself in his Newtown prison cell, according to police.

The 52-year-old Ferguson, who graduated from Staples High School in 1971 at the age of 20 after several brushes with the law, was serving a life sentence for capital felony and arson convictions.

The crime was one of Connecticut’s worst mass murders in years.

Ferguson was found unresponsive in his cell by staff at the Garner Correctional Institution just before 3 a.m., the state Department of Correction said, according to an AP report. He was pronounced dead just after 4 a.m. at Danbury Hospital.

Strong was found on the second floor of the home at 187 Compo Road South, near the intersection of Greens Farms Road.

Flames heavily damaged the first and second floors of the two-story home before firefighters got it under control at about 12:30 p.m.

Fire officials gave no official cause of the blaze, but there was speculation it may have been caused by smoking. One source said Strong’s body was found in a bathroom where she may have sought refuge from the flames.

Firefighters responded to the house today to extinguish a small fire which rekindled in some furniture left charred on the front lawn.

It was the second death in a Westport house fire in less than two weeks. A 52-year-old man was found dead in a house fire April 14 at 2 Moss Ledge Road. Police said the victim died of a self-inflicted gunshot wound.

A 52-year-old Westport man apparently set fire to a boat and house and then killed himself with a gun early today, fire officials said. At least one firefighter was slightly injured when he became trapped for a brief time while battling the blaze.

A neighbor spotted a boat burning alongside the house at 2 Moss Ledge Road, off of Long Lots Road, shortly after 4 a.m. and called police. When the first police officers arrived they found the burning boat and then saw flames in the house, a two-story colonial.

The victim, later identified by police as William P. Croarkin, was found dead in a second floor bedroom, according to the officials. They said they believe he set the fires and then killed himself with a shotgun found next to his body but that their investigation was continuing.

No one else was at home at the time. Both the house and boat suffered heavy damage.

One firefighter, Todd Denke, 36, of Westport, became trapped for a brief time on the second floor as he fought the blaze. He called for help on his radio and after a few harrowing moments escaped by crashing through a window and sliding head first down a ladder erected by fellow firefighters.

He was transported to Norwalk Hospital where he was treated for minor injuries and released.

About 30 firefighters, including volunteers, responded to the alarm.

First Selectwoman Diane Farrell was among those on the scene, along with Fire Chief Denis McCarthy and Deputy Police Chiefs Donald Brown, Al Fiore and David Heinmiller.

Longtime Westporter Anthony F. Slez Sr. died Monday in Norwalk Hospital. Slez, who had been in declining health in recent years, was 84.

A veteran of World War II, Slez was a standout athlete at Staples High School, where he won 15 varsity letters. He held several school records in track and was captain of the 1937 state championship basketball team.

Slez operated Slez Garage, formerly known as Slez-Benos Garage and Service Station, with his brother-in-law Art Benos for many years at 791 Post Road East, near the intersection of Long Lots Road (now Westport Car Wash). Friends remember him as saying, We didnӒt have customers, we had friends.

Michael R. Crabtree, owner and general manager of Toyota of Westport, died Saturday in the Bronx, N.Y. from injuries received in an auto accident. He was 33.

The Stamford residents death was reported in an obituary in The Advocate of Stamford.

Crabtree, whose family owns a number of automobile franchises, was a familiar figure in his dealership’s advertising.

He is survived by his parents, June Langran Crabtree and Robert E. Crabtree Sr. of Greenwich.

Among three sisters surviving him is Constance “Pinky” Markey of Greenwich, also familiar to area television viewers for her ads for the family’s Lexus of Westport dealership.