Selma (Saartje) Engel (nee Wynberg), of Branford, a former Westport resident who escaped a Nazi extermination camp after a prisoner uprising and was among the first to tell the world about the camp’s existence, died Dec. 4 in an assisted living facility in East Haven. She was 96.

Born in Zwolle, the Netherlands, she was the widow of Chaim Engel, with whom she escaped from the Nazi’s Sobibor extermination camp in Eastern Poland, and lived out the rest of the Holocaust hidden by Polish peasants in their barn.

After Russia defeated the Nazis in Poland, the couple returned to Zwolle and then moved to Israel, before emigrating to the United States in 1957, and living in Westport where they resided on Wilton Road.

The couple later moved to Oakwood Lane. Daughter Alida was a member of the 1964 Staples graduating class while son Fred was ‘66.

Denis P. Claveloux of Beaverton, Michigan, a former Westport resident, died Dec. 3 after a lengthy illness. He was 87.

He was born in Union City, New Jersey on Oct. 19, 1931 the son of Pierre and Anna (Azarian) Claveloux. He received his Bachelor’s degree from Fordham University, and his Master’s from Columbia University.

He served in the Army in the Korean conflict. He founded Claveloux, Mc Caffery, and Mc Inerney, an executive search firm in New York City, and Connecticut. He married Madeline Primeau on Oct. 23, 1998.

He lived in Westport and Fairfield Connecticut for over 40 years. He and Madeline retired in Georgetown, South Carolina in 2004, where Denis enjoyed his love of the ocean, filling his days with swimming and surf fishing.

Born May 13, 1952 in Newport, Vermont., he was the son of Elaine Miles Long, and the late Thomas R. Long, Sr. and had been a Vermont resident for more than 40 years.

Henry Korman of Westport and Hanover, Germany died Nov. 22 in Hanover at Vincents Hospital. He was 98.

He was born in Radom, Poland on March 30,1920. He witnessed the Nazi atrocities of World War II. He was a survivor of the Holocaust’s ghettos concentration camps and the death march to Bergen-Belsen.

On April 15, 1945 British forces liberated him at Bergen-Belsen. He reunited with his only surviving sister Goldie. His parents and three other sisters died.

He lived in Stockholm, Sweden for several years until emigrating to America, settling in New York City on June 4, 1949. On Nov. 11,1954 he became a U.S. citizen. After nearly 10 years in America, during a stopover to Israel he returned to Hanover for the first time since he was liberated at Bergen-Belsen.

Sylvia Schiffman of Westport died Nov. 24. She was 91.

A family obituary said she died “holding her dear friend’s hand and listening through the last note of Beethoven’s 9th Symphony.”

She was born in Brooklyn, New York, the middle child of three siblings. She had a stellar academic course, skipping three grades to enter Hunter College at 15.

There she met Billie, who would become her lifelong friend. She obtained a Master’s degree in English at Columbia, married Murray Schiffman in a ceremony that took place in a hurricane on Nov. 25, 1950.

Michele Tarzia Dunne of Westport died Nov. 22. She was 63.

She was predeceased by her mother, Carol Tarzia Dunne, her father, William Dunne and her brother William “Billy” Dunne.

She graduated from Staples High School and Norwalk Community College with an Associate Degree. Before retiring she had been employed by the Norwalk school system as a teacher’s aide.

She loved working with young children and had volunteered at Assumption Church in Westport.

Susan H.S. Creevy of Westport died Dec. 1 at home after a courageous two-year battle from a stroke and cancer. She was 71.

She graduated from the University of Bridgeport where she received her Master’s degree in art. Following college, she taught art and then turned to a long career as an office manager. She was an expert knitter and a gourmet cook.

She is survived by her husband Ed, her sister Barbara of South Yarmouth, Massachusetts, and several nieces and nephews. She was particularly close with her niece Christine and Christine’s children, Quinn and Ainsley.

People may visit the family on Wednesday, Dec. 5 from 9 to 9:30 a.m. in the Harding Funeral Home, 210 Post Road East, and meet directly at 10 a.m. in Assumption Church, 98 Riverside Ave., for a Mass of Christian Burial. Interment will follow in Assumption Cemetery, 93 Greens Farms Road. 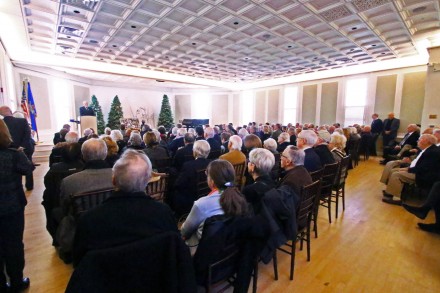 There was standing room only today at the memorial service for Myron (Mike) Belaga, longtime Westporter who died Nov. 24, age 88. Belaga, a retired oil company executive, was a community activist and former chairman of the Republican Town Committee. (CLICK TO ENLARGE) Dave Matlow for WestportNow.com 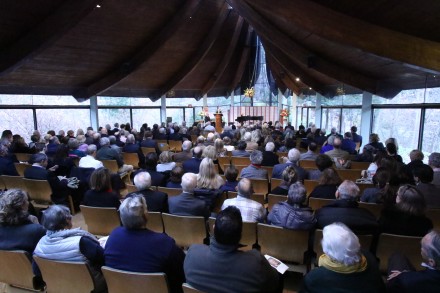 An overflow crowd gathered at the Unitarian Church in Westport today to celebrate the life of Alden O. Sherman of Weston who died on Nov. 10 at age 100 at Norwalk Hospital. Sherman, a former Westport resident, entrepreneur, aerospace industry legend, machinist, inventor, and classic car collector, was eulogized by members of his family and friends. (CLICK TO ENLARGE) Dave Matlow for WestportNow.com

John Robert Humphrey of Portland, Oregon, a former Westport resident, died Oct. 17 at home.. He was 94.

John and Nancy raised their children in Wisconsin, Texas, and Connecticut, where he worked for American Can Company and James River Corporation, before retiring to Massachusetts and finally Oregon.

They were active members of the United Methodist Church in Westport and later were founding members of Grace Community Church in Walpole, Massachusetts.