Dr. Iscela Rosa Bernal of Easton, wife of Dermot G. Mitchell, died Oct.  13 at Yale-New Haven Hospital after a brief illness. She was 48.

Born in Lima, Peru, she received her undergraduate degree and a Master’s degree from William Patterson University in Wayne, New Jersey and Master’s and doctorate degrees from the University of Bridgeport in acupuncture and naturopathic medicine.

She was a board certified and licensed naturopathic physician. She owned and practiced at the Bernal Center, Inc. in Westport, specializing in acupuncture and naturopathic medicine where she developed many close relationships with her numerous patients

Prior to becoming a physician, she worked at the New York Blood Center in New York City and as an AIDS research biotechnologist for many years, and authored several research papers.

He was a 1977 graduate of Staples High School where he was captain of the tennis team and an accomplished debater.

He graduated from Harvard University, London School of Economics and Political Science, and Cornell Law School.

He joined Sullivan & Cromwell in 1986, and worked in their New York and London offices before moving to Washington D.C. in 1994.

James “Jim” Neil Goodrich, a longtime Westport resident and husband of Luisa Francoeur, died Nov. 1 at Yale-New Haven Hospital while being treated for Acute Myeloid Leukemia. He was 75.

He had a big heart which encompassed a wide variety of communities, and which embraced him in return.

Jim is fondly remembered as someone who genuinely cared about others and went out of his way to render assistance.

Sometimes this was to his detriment, as illustrated by an episode in Colorado. When he enthusiastically helped push a stranger’s car out of the snow, he tore loose his biceps and had to cut short his vacation.

William A. “Bill” Cummings of Fort Myers, Florida, a former Westport resident, died Nov. 4. He was 93.

He was born Nov. 2, 1925 in Honolulu. His parents, Capt. and Mrs. Alexander Cummings, were stationed at Schofield Barracks where Capt. Cummings commanded an Infantry company.

Nancy Hammerslough of Westport died Nov. 1 at home. She was 87.

She was a figure in Weston’s political, cultural and social life for more than 50 years.

Her longtime home on Kettle Creek Road, “The Brown Barn,” not only was the setting for Democratic Party planning groups, scriptwriting sessions for Weston Players productions, and raucous holiday parties, it was also the home of her publishing company, Pictures of Record, an academic publisher focusing on archaeology.

That in turn led to a new business, Brown Barn Books, which published dozens of novels for young adults.

He was born on June 16, 1934 in Boston, the son of Richard and Ann Howes, and grew up in Weymouth and Longmeadow, Massachusetts.

He met Roxanne Diaz while attending Columbia Business School in 1958 and the two were married in 1960. Tom and Rox spent 60 happy years together, and had three sons, Tom, Ted and Scott. They lived in Westport from 1969 to 2012.

Tom graduated from Harvard University in 1956, and spent two years in the Army at Fort Sill Oklahoma. He thereafter graduated from Columbia Business School in 1960 and embarked on a successful career in business.

Edwin T. Gallant of Westport died Nov. 1 after a long battle with cancer. He was 75.

He was born and raised in Detroit, the son of the late Theodore and Bernice Gallant.

After college, he served in the Army Reserves and then began a long and successful career with Levi Strauss & Co.

His hard work and dedication brought him to Washington D.C., where he met his wife Leslie. There they began a marriage that lasted over 40 years. 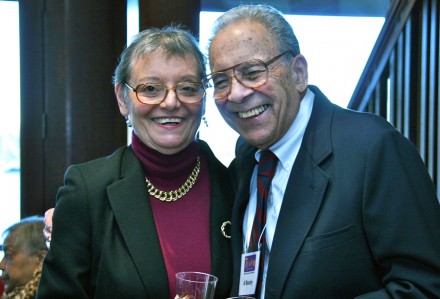 Janet Beasley, a well-known longtime Westporter and German-Jewish Holocaust survivor, died Nov. 3 after a long battle with cancer. She was 82. She was married to longtime Westport pediatrician Albert Beasley (shown in this 2010 photo.) She was best known as a naturalist, a swimmer, artist, and for her dedication to friends and family. A full obituary will follow. (CLICK TO ENLARGE) Lynn U. Miller for WestportNow.com

Francine Ellen Jacobs, a former Westport resident, died Oct. 28 after a long illness. She was 59.

Born April 23, 1959 in Norwalk Hospital to the late Louis and Shirley Jacobs, she was a 1977 Staples High School graduate. She lived in Westport until going off to Syracuse University and then living primarily in New York City.

She was a loving and devoted daughter, sister, aunt, and friend as well as a generous healthcare professional.

She had a long and productive career, including administrative nurse to Dr. Edwin Vaughan, chief of the Urology Department, New York Hospital.

He was born July 14, 1932 in Port Chester, New York in the same hospital where his wife Juliette was born years later.

Former owner and principal of Insurance Trends, Inc. in Westport, he was a trusted adviser to the Holler and Classic automotive and real estate companies.

Growing up, he was an avid fisherman and racquetball player. Staying in shape was important to him. He also enjoyed photography and lighthouses.