Carrie M. Bennette of Woodbury, a former Westport resident, died Oct. 14 at the Rehabilitation and Healthcare in Newtown. She was 98.

She was born in Westport on April 24, 1920, daughter of the late Angelo and Angela (Giordano) Cacavelle and had been a longtime resident of Westport prior to moving to Woodbury in 2011.

Prior to retiring, she was employed in the food service for the Westport public school system.  She also operated the Half W House with her sister Mickey.

Survivors include her daughter Barbara A. Cher of Woodbury. She was predeceased by her husband Salvatore D. Bennette and five sisters, Betty Bloom, Mary Moccia, Rose DeMeo, Mickey Aulenti, and Antoinette Renzulli.

Augustus Gerard Cardello, known to friends as “Gus,” died unexpectedly on Oct. 12 in Providence, Rhode Island. He was 19.

A native of Westport, he was born on June 6, 1999 in London, England. He was a 2017 graduate of Staples High School, and he was currently enrolled at Providence College.

He was the son of Joseph and Michelle Cardello; brother to Isabella and Christopher; grandson of Robert and Denise Murtha and Bobbi and (the late) Joey Cardello; Nephew of Christopher Murtha (Andie), and Aunts Lisa Fiske (Kevin) and Roberta Kemper. He is also survived by nine cousins: Devon, Megan, Troy, Kyle, Cammie, Mark, Jennie, Jamie and Brett.

She was born on April 13, 1943 in Westport to the late Ernest and Nicoletta DeMeo Verina.

In addition to her parents, she was preceded in death by her husband, Edward J. Amos. She is survived by her children, Arthur Britto (Patsy), Lisa Britto, Ellen Foster, Jennifer Resnick; 11 grandchildren and seven great-grandchildren.

She was a woman who knew what she wanted, and who cared for, and influenced, many. She was born in New York City on May 3, 1918, one of five children, to Edna and Hubert Muller.

She started her career working in the fashion industry putting on fashion shows and other events for Saks Fifth Avenue.

Later, she started a daycare in Briarcliff, New York, where she lived with her young family.

Ann P. Laraja, a resident of Westport for more than 80 years, died Sept. 6 in Vero Beach, Florida. She was 93.

She was born in New York on Oct. 19, 1924. She graduated from high school in Mount Vernon, New York in 1942, where she was part of an accelerated class for exceptional math students.

In 1946, she graduated from New Jersey College for Women (Rutgers/Douglass) with a BA in psychology.

She married Frank D. Laraja on June 28, 1947. As they began a family she found time to volunteer for several organizations that helped children and adults suffering from illnesses such as the Cerebral Palsy Association, the American Cancer Society, and the march of Dimes.

He was born on Feb. 28, 1942 in Mt. Vernon, New York, the son of the late William and Virginia Reilly. He had been a Westport resident for 42 years.

He received his Bachelor’s degree from St. Lawrence University and an MBA from Columbia University. He worked as an I.T. consultant for Arthur Andersen, Sara Lee, American Home Products and Electrolux.

Following his retirement, he led a successful second career in real estate sales for the Higgins Group of Westport.

Harriette (Lyford) Rauh of Westport died Oct. 1 in Tampa, Florida. She was 93.

Born Aug. 27, 1925 in Chicago, Illinois, she was a singer, teacher, bride of 67 years, mother of Daniel, David and Helen Glenn, grandmother of Marshall, Joshua, Andrew, Chester, Sara and Dustin.

Those who wish may donate in Harriette’s name to Spread Music Now https://www.spreadmusicnow.org/donate/.

A memorial service to be announced.

Deborah Jean Lindstrom of Weston, a former Westport resident, died Sept. 30 at Norwalk Hospital. She was 71.

The daughter of Russell Lindstrom and Bernice White Lindstrom was born Sept. 23, 1947 in Joliet, Illinois. She adopted Westport as her home where she began her career as a teacher at Bedford Elementary School.

After earning her law degree, she became a partner at the law firm of DePanfilis & Vallerie LLC, Norwalk, where she practiced for 24 years specializing in family and domestic law.

She was a member of the American, Connecticut and Norwalk-Wilton Regional Bar Associations. She rounded out her career as an investment adviser representative for Resnick Advisors in Westport for several years.

Edna Mae (Brown) Gelman, a 39-year resident of Westport, died Aug. 9 at Seacrest Retirement Center in West Haven. She was 80.

Born in Bradford, Pennsylvania to Clarence and Anna (Stanko) Brown, she grew up in Butler, Pennsylvania and later Stamford, where she graduated from Stamford High School in 1956.

After graduating, she worked in various secretarial and administrative positions, including for Otis Elevator, as well as working as an Arthur Murray dance instructor for many years.

In 1964, she met Sheldon Gelman and three months later, they married.

The ashes of longtime Westport residents Joseph and Estelle (Stascia) Reitano were laid to rest Sept. 28 at Arlington National Cemetery with military honors, four days after the date they were married in 1947. 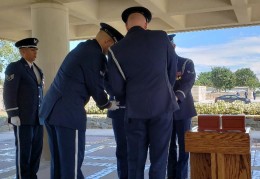 Joe, who died in 2001, was best known as a rural mail carrier in Westport and Weston, and later managed the Saugatuck Post Office.

He was honored to be a member of the U.S. Army Air Corps during World War II, and later served for his beloved U.S. Air Force in the Korean conflict.

Stascia, who died in 2017, will be remembered as a Westport school nurse, Girl Scout Troop leader, and visiting nurse to the elderly. She was proud to serve as a U.S Army Cadet Corp nurse during World War II.