Lawrence K. Grossman, former president of PBS and NBC News, died today at his Westport home. He was 86. 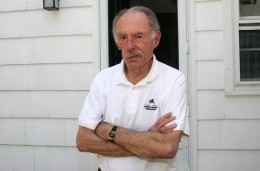 Lawrence Grossman outside his Brookside Drive home in 2008. (CLICK TO ENLARGE) Dave Matlow for WestportNow.com

His granddaughter Rebecca Grossman-Cohen said he had Parkinson’s disease and oral cancer, according to The New York Times.

The former advertising executive was forced out of NBC in 1988, four years after he was hired, after he resisted budget cuts ordered by then corporate parent GE.

In Westport, he later appeared periodically on panel discussions and spoke to local groups on media issues.

She was born in Chicago to the late Herbert H. and Kathryn E. Engelhard. She graduated from Evanston Township High School in 1954 and attended Northwestern University.

A courageous woman of great warmth and faith, she lived life with gusto and humor and never failed to end every phone conversation by telling those she loved how much she loved them.

She was born in Brooklyn, New York to Lillian and Nathan Mazer. She raised her five children in Bayside, New York with her husband Harvey Mestel, who died in December 1992.

She lived in Westport for the past 21 years with her youngest daughter, Laura Mestel Rubin, her son-in-law Fred, and two of her grandchildren, Melanie and Jordan.

She volunteered at the Norwalk Cancer Center for over 15 years, ushered at the Westport Playhouse, took art classes at the Senior Center, and shared her delicious baking and beautiful crafts with friends in the community.

Former Westporter Buell Neidlinger of Whidbey Island, Washington, a bassist, cellist and educator who worked within a wide spectrum of jazz styles, from Dixieland to the avant-garde, died March 16. He was 82.

His wife, Margaret Storer, said the cause was a heart attack.

Neidlinger was best known for his early collaboration with pianist Cecil Taylor. They appeared together on six albums made between 1956 and 1961.

He also recorded frequently with saxophonists Steve Lacy and Archie Shepp and trombonist Roswell Rudd; played in a trio with pianist Herbie Nichols; was the accompanying bassist on Tony Bennett’s hit 1962 recording of “I Left My Heart in San Francisco”; and collaborated prolifically with saxophonist Marty Krystall over a period of nearly 50 years. See JazzTimes obituary HERE and New York Times obituary HERE.

He was born Aug. 28, 1930 in Westport to Morris Lyon Burr and Catherine Aretta Burr.

His grandfather, William H. Burr Jr., was a prime mover behind the installation of Westport’s Minute Man monument, and gave the dedication address in 1910. William H. Burr Jr. came to be known as the “father of Sherwood Island State Park” because of his relentless efforts to make the park a reality.

William H. Burr, who gave his grandfather’s papers to the Fairfield Museum and History Center Library in 2004, was married to his surviving spouse Marilyn Jean Weber on Aug. 18, 1962.

He was born on a farm in rural northwest Pennsylvania near Titusville (home of the first commercial oil well), on Nov. 18, 1933, during a raging snowstorm. His brother Norman walked miles to get the midwife as the snow was too deep for the horse.

Born with a congenital heart defect, a doctor told Ward’s parents early on that he would never be able to work the farm, or pass a military physical, and needed to go to college.

That didn’t slow Ward from doing his share on the farm: plowing fields by horse team, milking cows, and tending to the livestock.

Barbara Jean Farquhar of Westport died March 15 at home. She was 84. She was the wife of 60 years of Richard J. (Bud) Farquhar.

Born in Redlands, California the daughter of the late Manual and Gloria Penacho, she had been a Westport resident for 42 years.

She worked as an office administrator for various banking, insurance and real estate companies and also owned her own pet sitting business. She was a parishioner of Saint Luke Church.

She was a voracious reader, extraordinary cook and an indoor plant enthusiast. She enjoyed swimming and was a member of the Westport YMCA. Her greatest joy in life was spending time with her loving family.

Betty Lasher Maniatty, a former resident of Westport and Wellington, Florida, died Feb. 20 in Darien. She was 95.

Born in Hudson, New York on Feb. 13, 1923, she graduated St Luke’s Nursing School in New York City in 1943 where she met and married the late Connie S. Maniatty, a graduate of Columbia University.They were married for 61 years when he died in 2010.

A longtime Westporter, Connie Maniatty was former Salomon Brothers managing director and partner and former chairman of the board of the Norwalk Hospital Foundation.

Betty worked as a nurse for several years in New York before moving to Connecticut. Betty and Connie Maniatty were members of Fairfield County Hunt Club and Palm Beach Polo & Country Club, where Betty was an avid tennis player and equestrian.

Maxine Hinkle, wife of the late Calvin S. Hinkle and a resident of Westport since 1959, died March 9 at Maplewood of Orange Assisted Living. She was 89.

She was born in West Virginia on Dec. 10, 1928 and was the daughter of the late Guy and Vera (Law) Heckert.

She was a volunteer at the Carousel Thrift Store and a longtime member of the Southport Congregational Church.

Florence O. Williamson, nee Oke of Old Saybrook, a former Westport resident, died March 3 in the hospice unit at Middlesex Hospital in Middletown. She was 91.

“Just call me Flo” was her popular reply. She was born in St. John’s, Newfoundland before it became Canada’s 10th province. It was Great Britain’s oldest colony. Flo was the older daughter of Gordon Jeans Oke and Siddie Oke, nee Hampton.

She was married three times, the first two ending in divorces, leaving her to find the love of her life, Fred Williamson, whom she married May 31, 1975.

Her family from St. John’s were noted. Her father was a leading funeral director. Her uncle, Harris Oke was the British foreign secretary in West Africa, now Gambia, and arranged the meeting between Gen. Mark Clark and Gen. Charles DeGaulle that led to the African landing in World War II.