She was the second daughter to Floyd (‘Ben’) and Ruth (‘Reggie’) Schwartzwalder. Ben Schwartzwalder was a Hall of Fame football coach at Syracuse University, where he trained future National Football League stars such as Jim Brown, Larry Csonka, Floyd Little and Ernie Davis, the first African American to win the Heisman Trophy.

Mary grew up in Syracuse where she attended Nottingham High School (Class of ‘59), and Syracuse University (Class of ’63).

She married Walfred (‘Wally’) Scofield in 1963, and they raised two children, Drew and Susan, in Westport, where they lived from approximately 1967 to 1992.

Born Christina Britta Maria Nygren on Jan. 7, 1944 in Sandviken, Sweden, the town where her father served as mayor, she spent her high school years in Stockholm, before immigrating to the United States for work.

China radiated a special joy and unique charisma that touched many.

A homemaker in the truest sense of the word, she had a magical touch for creating success for those around her. A fiercely proud mother of four boys, she fought for their education and professional development at every step.

Gale Ann Beyea of Weston, a former Westport resident, died Sept. 24 at the Wilton Meadows Health Care Center after a long battle with Parkinson’s disease. She was 79.

She was born Oct. 23, 1937 in Albany, New York. She grew up in Garden City, Long Island and spent her summers at her parent’s beach house on the North Shore of Long Island.

She attended Hollins College in Roanoke, Virginia where she majored in classical piano. She spent most of her adult life living in Westport and Weston.

She had passion for music and was a very accomplished pianist, giving her first recital in Garden City at the age of 13 to earn the Steinway baby grand piano she cherished throughout her life.

Pamela Luciano, a longtime resident of Westport and Norwalk, died Dec. 1 at Norwalk Hospital. She was 69.

The daughter of the late Henry John and Mary Louise (Chiccotelli) Luciano, she grew up in Westport and was a graduate of Staples High School and then graduated from Dry Air Hairdressing School in Norwalk.

She worked in the customer service department of MBI for over 30 years, prior to retiring four years ago.

She is survived by her son Joshua Luciano and daughter Selena (Stacey) Sawyer, both of Norwalk, her grandson Andrew Sawyer, brothers Henry John Luciano of Norwalk and Tim Luciano of Westport, and her sister Carol Ann Addison of New Jersey.

Ted Simons, known as “Westport’s Music Man” for his musical contributions to the community as well a Broadway, television, film, and cabaret musical director, composer, and arranger, died Dec. 5. He was 84.

He was a creative force in corporate America, creating shows and films for more than 100 companies, including Pepsi-Cola, IBM, GE, Ford, and Procter & Gamble.

His Broadway experience ranged from composing music for his first show “Potholes,” which was produced Off-Broadway, to “Bye Bye Birdie” and “Anything Goes” on Broadway. He also was musical director for “New Faces Of 1968.”

He also worked on the Mel Brooks film “The Producers,” some of the Miss America Pageants, and NBC’s “Hullaballoo,” as well as television specials with Barbra Streisand, Ethel Merman, and Paul Anka. 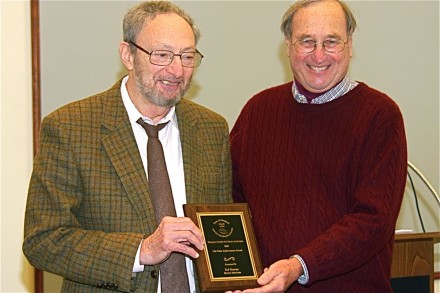 Ted Simons (l), known as “Westport’s Music Man” for his many musical contributions to the community over the years as well as a Broadway, television, film, cabaret musical director, composer, and arranger, died Dec. 5. He was 84. In 2009, the Westport Center for Senior Activities honored him with a lifetime achievement award presented by Jack Klinge, president of the Center’s Friends group. For many years, Simons was musical director of the Y’s Men’s Hoot Owls singing group. The family said a memorial service will be held in the spring. (CLICK TO ENLARGE) Larry Untermeyer for WestportNow.com 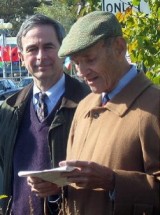 William C. Steinkraus at the 2003 dedication of the Ruth Steinkraus Cohen Bridge in Westport’s center named after his sister. WestportNow.com photo

William Clark “Bill” Steinkraus of Darien, a former Westport resident and a show jumping champion once called “the man who epitomized style on horseback,” died Nov. 29. He was 92.

He was the brother of Ruth Steinkraus Cohen, for whom the Post Road bridge over the Saugatuck River in Westport’s center is named. She died in 2002 at age 81.

He was the first United States rider ever to win an Olympic individual gold medal (Mexico City, 1968). A U.S. Equestrian Team member from 1951 through 1972, he competed in five Olympics.

In 2003, at the dedication of the Ruth Steinkraus Cohen Bridge, he said: “There is an important symbolic value in this, for it reflects the commitment that both the U.N. and many Westport citizens have made toward building bridges between nations, starting with the building of relationships between individual people and families, and indeed of towns.

Helen (Muffie) S. Gilroy of Weston died Dec. 5 at Norwalk Hospital. She was 81.

The wife of the late John J. Gilroy was born in Old Greenwich on June 29, 1936 to J. Albert and Margaret G. Smith.

She was an avid skier and softball player. She was loved by her family and her extended family, which is made up of our community, generations past and present. She will be missed by all.

She is survived by one son, Mark Gilroy and his wife Christie of Olney, Maryland, three daughters, Peggy Cannon and her husband Mark of Weston, Betsy Gilroy of Westport, and Ginny Gilroy of Westport, two brothers, her twin brother, Frederick G.C. Smith, his wife, Patricia, and James G. Smith and four grandchildren.

The husband of 58 years to Marianne Farrell was born in Chicago to the late Ernest and Rose Farrell and was an avid athlete and outdoorsman.

He graduated from Bradley University having achieved a BA and MBA. He was a U.S. Army veteran, serving in the Counter Intelligence Corps in Germany following World War II.

He moved to Westport in 1968. In 1996, he retired from the Continental Can Company after a 40-year career as the head of marketing, research and development.

Wife of the late James Kennard Whittle, she was born Nov. 25, 1922 in Harrisonburg, Virginia.

She left her home in the Shenandoah Valley during World War II, working as a secretary in the Pentagon before joining the reconstruction effort in Europe during the closing months of the conflict.

She met, fell in love, and married Ken Whittle in Vienna, Austria, where he was stationed at the time.