Ranice was born in Brooklyn, NY and grew up on Far Rockaway Beach, NY where she met the love of her life, Arnold Appell. In 1950, Ranice and Arnold were wed and moved to Norwalk. Ranice, being a “modern woman” worked as a dental assistant while raising her two children and worked there for 35 years.

She was a force to be reckoned with and played a huge role in both her coworkers and patients’ lives.

Ranice and Arnold moved to Westport in the early 1960s where they resided for 40 years before retiring to Grantham, New Hampshire.

Dean Powers of Saugatuck Island in Westport, son of the late Stevens and Eunice Powers, died June 21. He was 69.

Dean was a lifelong Westport resident and a graduate of Staples High School, class of 1969. Dean attended the University of Massachusetts Stockbridge School of Agriculture for a two-year program and graduated in 1971. He was also a long-time member of the Stamford Mineralogical Society.

Dean and hard work became synonymous at an early age. He had a garden tractor and cart at the age of 12 and would do odd jobs for his neighbors on Saugatuck Island. He was a sponge for knowledge on all topics from plants, rocks, insects and how to build things.

Dean’s true genius could be seen in the beautiful gardens he would create in his mind and then build by hand. He could do more with a shovel and a hand truck than most small companies could with a crew of four. He would do anything for anyone and accept nothing in return.

Blanche L. Sims, accomplished illustrator of more than 100 children’s books, winner of the Parent’s Choice Foundation Commendation for Television, 2000 for Beyond the Butterfly, died May 19 in Fairfield. She was 92. 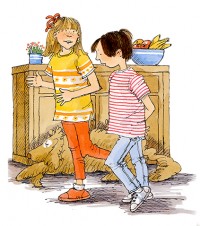 Her career began at the Famous Artists School in Westport as a researcher before being promoted to art Instructor for their young peoples art course.  The school closed in 1972 and Blanche joined Xerox Educational Publications as an illustrator for Weekly Reader. She later launched her freelance career as an illustrator of children’s books working from her studio in Westport.

Blanche moved to Newtown, where she lived with her son Bill and his family for 17 years. She found continued  inspiration for her illustrations from her grandsons, Billy and Henry, their black cat Boo-boo, their Great Pyrenees dog, Buddy who appeared in several of her books.

Some of her favorites include, the George and Diggety series, the Sally Ann series, and I Took My Frog to the Library

Nan Richards of Westport died June 7 at home from a sudden heart attack. She was 61.

She is survived by her husband, Daniel (Dan) Richards (Westport), her two children, Casey and Peter Richards (both in San Francisco), her brother, Peter Guastamachio, and his wife, Marlene Kosinski (Fremont, California).

Nan was born on April 28,1959 in Castro Valley, California daughter of the late Carmine Guastamachio and Michiko Ando. She lived her formative years on Kwajalein Missile Base in the Marshall Islands, spent junior high in Castro Valley, California, the beginning of high school in Cedar Rapids, Iowa, and the end of high school in Glastonbury, where she graduated NHS in 1977.

She then went on to Boston College where she graduated with a BA in English literature in 1981. Nan immediately moved to San Francisco, where she spent days as a patent law paralegal, nights sailing a yawl in the bay, weekends skiing in Tahoe or camping in Yosemite, and years falling in love with Dan whom she married in 1986.

Allen Kantor of Norwalk, formerly of Westport, died June 15 at his home. He was 91.

He was born in Brooklyn, New York, a son of the late Irving and Frances Kantor.

He was a land developer who enjoyed playing tennis, reading, cooking, and most of all, his loving family.

He is survived by his children, Stephanie Pasquella of Norwich, David Kantor and his wife Lisa of Sandy Hook, his grandchildren Michael Pasquella and Kaitlyn Kantor, his brother Marvin Kantor of Boynton Beach, Florida, and many other close relatives. Allen was predeceased by his wife Gail Homan-Kantor.

Born in Bayside, Queens, New York the daughter of the late Edward and Katherine McLaughlin, she had been a Westport resident since 1974.

She was a graduate of Converse College in Spartanburg, South Carolina. She was a patron of the arts and numerous feminist and political causes. She loved the music of Mozart, touring museums, and going to theater.

She was loved and appreciated by all who were fortunate to know her. She is survived by two sons, Thomas R. Rose of Westport and Christopher E. Rose of Edmeston, New York. The kindness in her eyes, her laugh, and her gentle and generous manner, will be dearly missed.  Funeral services will be held privately.

Rosalie Marie Frank battled ALS (Amyotrophic Lateral Sclerosis) for over a year until the day she died on June 9. She was 75.

Born in 1944 to Rosalia and Antonino Calabrese in San Fratello, a small village in Sicily, Italy, she immigrated with her family to the United States in 1955.

They passed through Ellis Island and eventually moved to New Jersey. She met Rocco J. Frank in Palisades Park, New Jersey, and they married in 1965.

They moved to Westport in 1982 where she and her veterinarian husband, Rocco, founded Westport Animal Hospital and continued together their life’s calling of helping countless animals.

Al Beasley of Westport, a retired pediatrician who championed numerous causes as a dedicated activist in the field of human rights and influenced generations of Westporters, died June 15 at Norwalk Hospital. He was 98.

He had suffered a fall two weeks ago.

He was a practicing doctor for more than 50 years. He was co-founder of Willows Pediatrics; associate clinical professor of pediatrics at Yale School of Medicine, and an emeritus staff member at Norwalk Hospital.

Survivors include his son Scott, and daughter Jean. He was predeceased by his first wife, Dr. Jean Beasley, and his second wife, Janet Beasley. (Full obituary to come.)

Ann Hallan Lakhdhir died May 7 at her home in Westport. She was 87.

Born in 1932 in Brooklyn, New York, she attended Brooklyn Friends School, graduated from Radcliffe College in 1954, and earned M.A. degrees in international relations and education from Columbia University.

In 1957 Ann married Noor A. Lakhdhir, then a recent immigrant from India whom she had met while they both lived at International House in Manhattan.

Ann had wanted to join the Foreign Service, and had passed the written exam, but in those days women were not allowed to join or remain in the Service if they were married. Instead, she focused her interests and energy for the next 60 years on her family, and on addressing pressing domestic and international issues.

She is survived by her son Marc Bowman (Jill) of Marshfield, and their sons Bryan and Kyle Bowman and her daughter Karin Bowman of Westport, and Cotuit, Massachusetts, and her children Jeffrey, Lila, and Fredrick Chickvary.

After receiving her B.A. from Wheaton College, Jayne enjoyed a long career as an editor and writer. She and her late husband, Verne, raised their family in Westport.