The Westport Registrars of Voters advised party-affiliated voters wishing to participate in the Sept. 10 municipal primary election to verify their current party affiliation prior to June 10, the last day for voters to change party affiliation.

Unaffiliated voters may change up until noon of the day before the primary.

The need for a primary may not be determined until as late as Aug. 7, long after the June 10 deadline for inter party changes.

To find out if you are registered as a Democrat or Republican, go to http://www.dir.ct.gov/sots/LookUp.aspx.

The House of Representatives tonight approved a new state budget that averts a major projected deficit without increasing income tax rates, but does shift billions of dollars in pension debt onto the next generation of taxpayers.

Despite the potential for a $3 billion-plus deficit unless adjustments were made, legislators and the new governor made new investments in health care, bolstered local education aid significantly while sparing cities and towns from having to help cover municipal teacher pension costs.

The Democrat-controlled chamber voted 86-65 to send the package to the Senate, which is expected to approve it Tuesday.

The $43.4 billion, two-year plan avoids an income tax hike on the rich the new governor opposed, but establishes a much smaller “mansion tax” surcharge on the sale of expensive homes. The budget also asks more from small businesses and defers the first stage of property tax relief Lamont pledged on the campaign trail.

Foundation representatives overseeing how that money — and a matching $100 million in taxpayer money — are spent would be exempt from key ethics and disclosure rules.

The provision was included in the new two-year state budget Gov. Ned Lamont negotiated with his fellow Democrats in the House and Senate majorities. The House approved it late today and the Senate was expected to adopt it Tuesday.

“These corporate board-holders are going to go up to the balcony and sprinkle down dollars on, I guess, the peasants of Connecticut, and we’re supposed to be happy about that?” said Deputy House Minority Leader Vincent J. Candelora, R-North Branford.

The tentative agreement between Gov. Ned Lamont and leaders of the Democratic majority boosts funding for education grants and nursing homes, expands Medicaid eligibility for working poor adults with children and settles a long-standing funding dispute with Connecticut’s hospitals.

The $43 billion, two-year budget does not include a proposed tax hike on sugary drinks or on capital gains earnings of the rich. Also absent are electronic tolls, though leaders said that issue could be revisited in a special session.

It also refinances future contributions to pension funds for teachers and state employees, shifting billions of dollars in costs — plus interest — onto taxpayers after 2032.

By By Mark Pazniokas and Maya Moore

Bipartisan legislation approved on a busy Saturday by the House of Representatives cuts a path through a thicket of Connecticut liquor laws and regulations with roots reaching back to the repeal of Prohibition. An overhaul of the bottle bill did not fare as well.

On a vote of 140-5, the House gave final passage to An Act Streamlining the Liquor Control Act, a compromise produced by legislators and lobbyists over beers at a meeting hosted by a Hooker.

That would be the Thomas Hooker Brewery at the Colt complex in Hartford. Lobbyists and legislators crowded into a conference room at the brewery, negotiating the bill page by page.

“We’ve really dragged this industry into the 21st century with this bill,” said Rep. Mike D’Agostino, D-Hamden, the co-chair of the General Law Committee, which oversees liquor laws.

By Jenna Carlesso and Maya Moore

Connecticut is poised to raise the legal age to purchase tobacco products from 18 to 21 with an overwhelming vote today in the state Senate endorsing the bill.

The bill won passage in the House earlier this month and now heads to Gov. Ned Lamont, who has pledged to sign the measure. The law would take effect in October.

The Senate voted 33-3 in favor of the proposal, with three Republicans dissenting.

“Increasing the age of being able to purchase tobacco products … is going to dramatically cut the number of young people who start smoking in our state,” said Sen. Mae Flexer, D-Killingly, a key backer of the measure.

Gov. Ned Lamont and Democratic legislative leaders today announced a tentative, two-year $43 billion budget deal that does not contain the income tax hike on the wealthy sought by progressives in the General Assembly.

Despite this, House Majority Leader Matt Ritter predicted that liberal Democrats would back the package.

“It’s a budget I’m proud of on many fronts,” Lamont said during a late afternoon news conference in his Capitol office, flanked by Democratic legislative leaders. “We’re going to get this vote on … early and on time, a budget that shows we’re living within our means and a budget that invests in our future.”

Neither the Democratic governor nor legislative leaders disclosed all the details of the agreement, most of which had been hammered out late last week.

The House of Representatives has bickered for long hours this week on topics ranging from climate change to banning single-use plastic straws, but tonight they came together swiftly and unanimously for a bill that would help prevent bullying in schools.

The “Act Concerning School Climates” would establish a school climate collaborative to ensure that local districts have access to best practices in social-emotional learning. The bill also modifies the definition of bullying to include acts that are pervasive and persistent, as well as single acts that are severe.

Although the vote was unanimous, discussion of the bill was at times emotional.

When Rep. Vincent Candelora, R-North Branford raised concerns about “differentiating between behavior that should be reprimanded because a child might have acted up in a classroom … versus repetitious behavior that rises to a higher level,” Rep. Liz Linehan, D-Cheshire, a key proponent of the bill, offered her own personal experience. 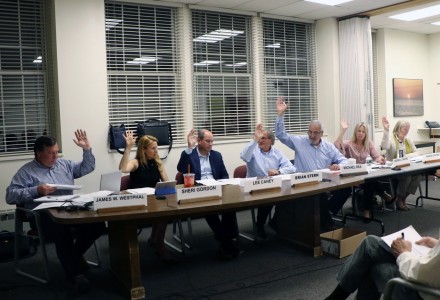 For the fourth year in a row, Westport’s Board of Finance tonight unanimously kept the mill rate flat at 16.86.That translates into $16.86 of taxes for every $1,000 of a home’s assessed value determined by the revaluation three years ago. But members expressed concern that keeping the mill rate flat will be difficult in future years. Said Lee Caney: “Pulling rabbits out of the hat next year may not be doable.”  (CLICK TO ENLARGE) Dave Matlow for WestportNow.com

Setting aside the 11th-hour threat of a gubernatorial veto, the state Senate voted 21-15 tonight to pass a Democratic bill that would create a paid family and medical leave insurance policy, a step toward a long-sought goal of labor progressives.

Passage ignited a celebration in the Senate chamber and gallery, but its final path to becoming law requires a victory in the House and the passage of a separate bill addressing Gov. Ned Lamont’s demand that the measure be revised to encourage private insurers to bid on the new line of business.

The disagreement with the governor was largely ignored during the debate of six-plus hours, a tactical decision by Democrats who focused on their common ground with the governor, leaving for another day a discussion about what separates them.

“The really good news here is that we agree — with the governor, with the House — on the fundamental elements of this bill,” Sen. Julie Kushner, D-Danbury, said before the debate began. “This bill will provide working families with time off to take care of their kids with wage replacement, so that they don’t have to pick between their family members and a paycheck.”