Washington — Every year gun control activists from Newtown gather here to condemn congressional inaction on legislation they think will keep Americans safe. This year the mood at the gathering was quite different.

There were still tears and emotional stories as family members and friends of victims of gun violence spoke passionately of the need for stricter federal gun laws.

But the midterm elections, which wrested control of the U.S. House from the GOP and sent new members who ran on the issue of gun safety to Congress, has infused optimism into a movement that took off after the massacre of 20 first graders and six educators at Sandy Hook Elementary School six years ago.

“This election was more than a referendum, it was a very strong message by the American people,” said Sen. Richard Blumenthal, D-Conn, after a news conference today organized by the Newtown Action Alliance to mark the six year anniversary of the Connecticut school shooting.

The Commission on Fiscal Stability and Economic Growth today produced a bleak assessment of Connecticut’s fiscal health for the incoming governor and General Assembly, the panel’s second attempt in nine months to convince policy leaders that the state is rapidly approaching a tipping point.

In a 32-page report, the commission sharpened a sprawling set of prescriptions initially issued on March 1, only to see its work attacked by labor and quickly shelved as a closely divided legislature turned to the short-term task of closing a deficit, balancing the state’s $20 billion budget, and campaigning for re-election.

The commission says the state needs to shrink spending by $1 billion, while adding revenue by modernizing its system of taxation and tax collection — not by raising tax rates. The panel backed away from a previous call to curtail collective bargaining for public employees, instead suggesting Gov.-elect Ned Lamont seek voluntary concessions.

“Now, the timing is right,” the commission says. “We have a new Governor-elect and General Assembly-elect, and a full legislative session coming in 2019. In this interim period we have refined and focused our recommendations, and now present our ‘Report 2.0.’ We believe it is the correct starting point for comprehensive and bipartisan reform. While our problems are severe, we are convinced they are fixable.”

Back from an orientation seminar for new governors, Gov.-elect Ned Lamont today outlined an approach to finding “the best and brightest” for his new administration, hinting that some top appointees would be executives from outside politics who are willing to accept a pay cut to work for Connecticut.

Two senior human-resource executives, Kevin Myatt of Yale New Haven Hospital and John Denson of the global executive recruiter, Korn Ferry, were introduced as the co-chairs of a talent search committee that Lamont says is intent on broadening the typical pool of potential appointees.

Lamont is not expected to announce his first appointments until next week, putting him roughly on the same pace set eight years ago by Dannel P. Malloy, the first Democrat elected governor in 24 years. By this point, Malloy already had named a chief of staff and budget director, but he was four days away from identifying a 22-person transition team. Lamont named his 19-person team last week.

Ned Lamont’s biggest challenge as governor is likely to be devising and then selling fellow Democrats in the General Assembly on the “structural changes” he says are necessary to break Connecticut’s cycle of chronic budget deficits.

Connecticut’s swelling budget reserves are a temptation for lawmakers weary of the austere budgets that have cut municipal aid, social services and education in recent years. But the governor-elect says tapping the reserves would be a temporary fix, delaying the hard choices necessary to permanently stabilize the state’s finances.

“There’s a tendency to want to spend [the reserves] and defer the tough choices we know we have to make,” Lamont said in an interview with CT Mirror. “But you know how volatile our income taxes can be. If the bottom falls out … we ought to be ready.”

Tension over the extent to which the state should use the growing budget reserves, commonly known as the “rainy day fund,” already is evident, posing an early test for Lamont, who has yet to outline what he means by “structural changes,” a phrase he frequently employed during the campaign.

A day after Connecticut experienced its own blue wave in the midterm elections, Senate and House Democratic leaders said addressing a minimum-wage increase, tolls, and paid family medical leave will likely be among the top priorities the majority takes on in the upcoming legislative session.

Democrats took 24 seats in the state Senate and 92 in the state House of Representatives on Election Day, giving them overwhelming discretion in setting the general assembly’s agenda after struggling to work with a slim majority for the last two years.

Their first legislative gains in 10 years broke an 18-18 tie in the Senate and increased their 80-71 advantage in the House. It also came amid Democrat Ned Lamont’s clinch of the governorship and decisive wins for the party in all other constitutional offices.

Ned Lamont, a Democrat lifted to victory in large measure by Connecticut’s rejection of a divisive Republican president, delivered a conciliatory message today in his first public appearance as the governor-elect, pledging to work with labor, business and the legislature’s wounded GOP minority. 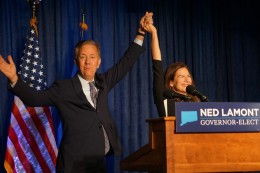 They had to wait a day, but Ned Lamont and Susan Bysiewicz had their celebratory moment. (CLICK TO ENLARGE) Mark Pazniokas for Ctmirror.org

The loser of a nationally watched U.S. Senate race a dozen years ago, Lamont had to wait overnight to claim a narrow victory over Republican Bob Stefanowski, who conceded defeat in a phone call at 8:30 a.m. that Lamont called gracious and cordial. Unofficial results showed a vote of 48 percent for Lamont, 47 percent for Stefanowski, and 4 percent for Oz Griebel.

“Elections matter, and I’m reaching out to each and every one of you,” Lamont said. “As I told Bob, I’m reaching out to the folks that supported him and the Oz supporters. I have to bring people together to make sure this is a state that hangs together going forward, making the decisions we need to get this state growing again. And that’s what I mean to do.”

Edward Miner Lamont Jr. of Greenwich, descended from a Wall Street financier and cross-endorsed by the leftist Working Families Party and the Connecticut AFL-CIO, will become Connecticut’s 89th governor on Jan. 9, six days after his 65th birthday. He joins Lowell P. Weicker Jr., John G. Rowland and Dannel P. Malloy in being elected governor with less than 50 percent of the vote.

“While this is clearly not the result I desired, I wish Jonathan, the town of Westport and the state of Connecticut great success over the next two years,” Kraut said in a statement emailed to media.

Kraut arrived after 11 p.m. at the Little Barn Tuesday night to concede, a time later than most local concessions, which left some Democrats wondering whether he would show.

In a live call to a supportive morning radio team, Republican Bob Stefanowski today publicly conceded the Connecticut governor’s race to Democrat Ned Lamont, saying after a long and seesaw night of slow returns, “He won fair and square.”

Stefanowski told “Chaz & AJ in the Morning” on WPLR that he had just called Lamont, describing a cordial end to what had been a bitter, deeply person campaign to succeed Gov. Dannel P. Malloy, a Democrat whose thin victory in 2010 was not declared for three days.

“I went to bed, we were up 20,000 votes, but the last precincts to come in are in New Haven and Hartford and Bridgeport,” Stefanowski said. “They tipped the scales early this morning.”

Stefanowski’s campaign went to court Tuesday night to challenge ballots cast by late-registered college voters in New Haven and Mansfield, but he said those ballots represented hundreds of votes, insufficient to change the results.
g majority of Connecticut residents knew that was not a serious or achievable proposal,” Bronin said. “I think people saw right through it.” 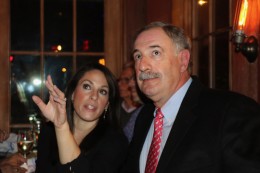 Jonathan Steinberg watches the returns come in on television. (CLICK TO ENLARGE) Dave Matlow for WestportNow.com

“This is much more exciting than last time, and I’m very optimistic,” said Mark Marcus, a longtime Democrat and former selectman.

Their optimism was on target. Unofficial results posted on a television screen above the bar showed incumbent Steinberg defeating Kraut by 7,778 to 4,393, or 61 to 39 percent for the 136th Assembly District. 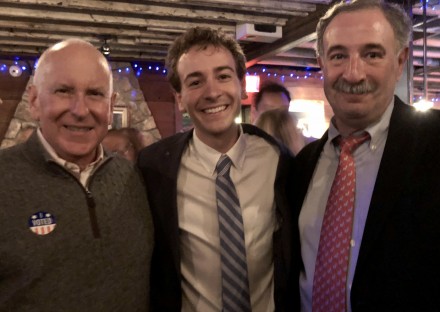