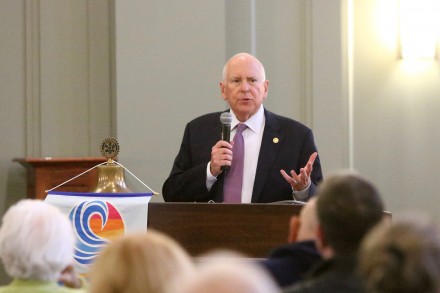 Westport First Selectman Jim Marpe told the Westport Rotary Club today four things keep him up at night: 1) The new estimate it may cost $70 million to build a new Coleytown Middle School; 2) Keeping Westporters safe in this era of shootings and hate crimes; 3) The impact of a new style of multi-family housing on Westport, and 4) How best to promote downtown Westport and Saugatuck. “All these things are different than my list of a year ago,” he told fellow club members. (CLICK TO ENLARGE) Dave Matlow for WestportNow.com 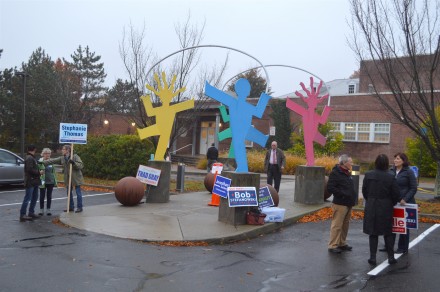 Campaigners for both major parties greet voters today outside the polling place at Saugatuck Elementary School. They had to maintain the legally required distance of 75 feet from the polls. (CLICK TO ENLARGE) Jarret Liotta for WestportNow.com

Election officials today expressed expectations for a big voter turnout as Westporters went to the polls.

John Englehart was the first voter at Town Hall today, voting in District 136-6. (CLICK TO ENLARGE) Jarret Liotta for WestportNow.com

More than twice the number of absentee ballots as in 2014 — the last gubernatorial election — are one indication.

“The absentee ballots were hot and heavy this year,” she said, with a total of 18,629 registered voters in Westport as of Monday. 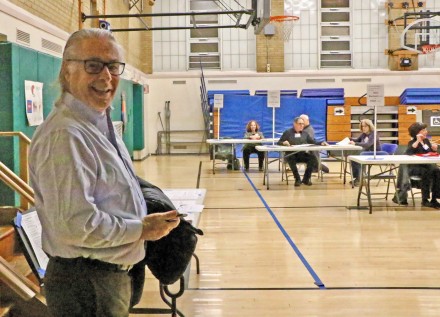 Raul Ortega was first in line when the Coleytown Elementary School polling place opened today.  Born in Cuba, he emigrated to the United States with his parents in 1963 and was naturalized in 1968. (CLICK TO ENLARGE) Dave Matlow for WestportNow.com 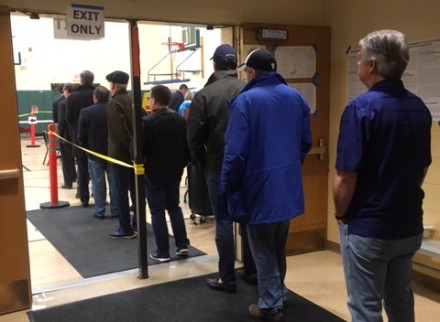 As the polls opened at 6 a.m. today at Westport’s Greens Farms Elementary School, lines were out the door, indicating an unusually heavy early turnout. John Karrel for WestportNow.com

It was early on Halloween-eve when small superheroes, princesses, and wizards began knocking on the doors of seaside Westport homes. Will Haskell, a newly minted college graduate, was out there zigzagging the streets, too — but unlike the trick-or-treaters, he was after votes, not sweets.

Haskell, a 22-year-old Democrat, has been campaigning relentlessly in an effort to do something some political pundits thought improbable — flip the 26th Senate district seat where Republican incumbent Toni Boucher has served for Haskell’s entire life.

The race is one of the key state legislative contests, as Democrats and Republicans vie to tip the scale on the current 18-18 party split in the Senate on Tuesday.

Boucher has maintained steady control of her seat for two decades, despite local support for Democrats in national elections, most recently for Hillary Clinton by more than 20 percent in 2016, and former President Barack Obama before that.

Residents who are not currently registered, but would like to vote on Tuesday must come to: Election Day Registration from 6 a.m. to 8 p.m. at the Town Hall Auditorium, 110 Myrtle Ave.

“The Election Day registration process takes longer than the process for voting at the polls,” they said in a news release.

“Also, the Secretary of the State requires us to cease all Election Day registration activity promptly at 8 p.m.

Candidates in Connecticut’s open race for governor made closing arguments today at rallies in a cathedral and a warehouse, in conversations at diners and a sports bar, and at one sparsely attended news conference set with Bushnell Park foliage and a sun-splashed State Capitol as a postcard picture backdrop.

More than one million voters are expected to go to the polls Tuesday to choose a successor to Gov. Dannel P. Malloy, an unpopular Democrat ubiquitous in Republican Bob Stefanowski’s commercials, just as a polarizing Republican president, Donald J. Trump, is central to the campaign of Democrat Ned Lamont.

Malloy’s name was repeatedly invoked today at a GOP rally at United Concrete Products in Wallingford. At an African-American church in Bloomfield, Lamont and other Democrats publicized what Stefanowski seldom mentions: He is endorsed by Trump, and he supports the president’s dim view of the Affordable Care Act.

“Ten years ago today, Barack Obama was elected president, and two days from now we get the first chance to send a message that we reject the president who is trying to destroy everything that President Obama tried to do,” Hartford Mayor Luke Bronin told Democrats at the First Cathedral, a 3,000-seat megachurch.

Another day, another poll. Democrat Ned Lamont is up by 9 points in a new poll today. Republican Bob Stefanowski had a 2.4-point lead in another Thursday. And there probably is at least one more poll coming before the only one that counts on Tuesday.

The bottom line, according to both campaigns, is that the race is competitive, with the result resting on who turns out in a season of political crosscurrents. Connecticut is one of 11 states with gubernatorial races generally rated as toss-ups.

The latest Connecticut poll is by Gravis Marketing, which bills itself as a nonpartisan research firm. Its survey of 681 likely voters from Oct. 30 through Nov. 1 found Lamont leading Stefanowski, 46 percent to 37 percent, with Oz Griebel at 9 percent. 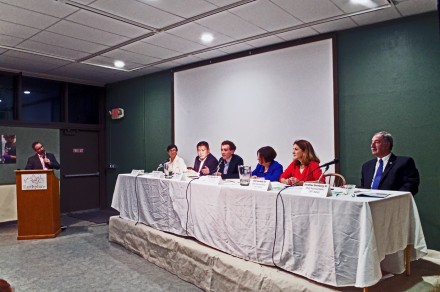 Earthplace and the Green Task Force tonight sponsored an environmental debate at Earthplace for state legislative candidates who are seeking represent Westport in the next session. It was moderated by David Mann of the Task Force, and was attended by more than 70 persons. The participants include (l-r) Michelle McCabe, Tony Hwang, Will Haskell, Toni Boucher, Gail Lavielle, and Jonathan Steinberg. Absent was Greg Kraut, the Republican challenging Democrat Steinberg. (CLICK TO ENLARGE) Jaime Bairaktaris for WestportNow.com