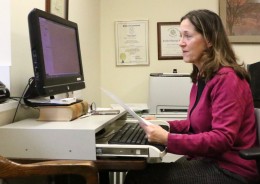 “With five days to go until the elections we already received more absentee ballots than the total for either of the last two gubernatorial elections — and this election does not have an incumbent running,” she said.

Strauss said the number of absentee ballots received is 1,119 out of 1,896 issued. 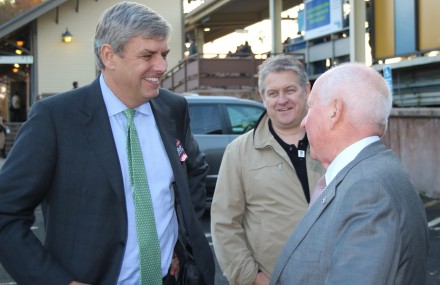 Republican candidate for governor Bob Stefanowski visited with voters today at the Westport train station in Saugatuck, discussing his plans to turn around Connecticut’s economy and asking for their vote on Nov. 6.  Westport First Selectman Jim Marpe (r) was on hand to welcome Stefanowski and discuss the upcoming election. (CLICK TO ENLARGE) Contributed photo

Westport Town Clerk Patricia Strauss has announced that the Town Clerk’s office will be open for absentee voting on Saturday from 9 a.m. to noon.

These special office hours are scheduled to accommodate voters applying for an absentee ballot to vote in the state election to be held Nov. 6.

They will be available through Monday, Nov. 5, until 4:30 p.m.  Ballots must be returned to the Town Clerk’s office no later than 8 p.m. on Tuesday, Nov. 6, when the polls officially close.

U.S. Rep. Jim Himes and Republican challenger Harry Arora on Monday night presented two different views on how the United States should treat friends and foes around the world.

In their third and final debate, hosted by the World Affairs Forum at the University of Connecticut’s Stamford campus, Arora often defended President Donald Trump’s foreign policy, including his protectionist “America First” campaign.

“The America First policy is a balance between American interests and values,” Arora said.

Himes, meanwhile, continued a long-standing criticism of some of Trump’s foreign policy moves, including what he called the president’s “love affair” with North Korean dictator Kim Jong Un, and said the “America First” policy would weaken the United States through isolation.

A Quinnipiac University poll of likely voters released today shows Democrat Ned Lamont’s lead over Republican Bob Stefanowski has shrunk by half to four percentage points in Connecticut’s gubernatorial race and now sits precariously within the margin of error.

Lamont leads Stefanowski 47 percent to 43 percent, with petitioning candidate Oz Griebel at 7 percent. Voters preferring Lamont have not moved since the last Quinnipiac poll on Oct. 10, while Stefanowski has gained four points. Griebel had 11 percent in the previous poll.

“This race is looking a lot like the last two elections for governor in Connecticut — a real nail-biter,” said the poll’s director, Douglas Schwartz.

Whether it is national politics or local economics that is encouraging increased interest in state government is not clear. 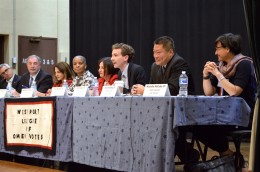 But a standing room only turnout for tonight’s Westport Town Hall candidate debate indicated that many Westporters plan to participate in the state election process next week.

While the debate had no direct candidate rebuttals, several moments respectively drew big applause and shocked gasps from the audience — standout points amid a tempered mélange of resume recitations and platform lists. 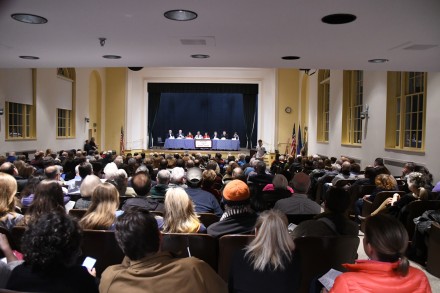 There was a standing room only crowd at Westport Town Hall tonight for a League of Women Voters of Westport debate among state legislative candidates. (CLICK TO ENLARGE) WestportNow.com photo

Hartford — Former Vice President Joe Biden, a target of the pipe bombs mailed to critics of President Donald Trump, called on both parties today to lower the temperature of political discourse in America while heading a Democratic rally framing the 2018 election in urgent and even apocalyptic terms. 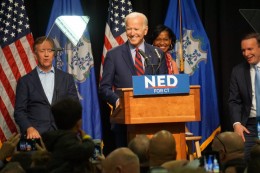 “This country has to come together,” Biden told a partisan audience that a party spokesman said topped 1,300 in a packed gymnasium and overflow room. “Our political opponents are not our enemies.”

“We’re so much better than this. We just have to remember who we are,” Biden said.

But conciliation was a fleeting message at an event built around anger directed at President Donald Trump and Republicans in Washington. Opposition to the president has been an organizational principle of Connecticut Democrats since election night in 2016, and Biden and the Democratic ticket repeatedly returned to a need to resist the GOP.

The survey of “likely” Connecticut voters also found slightly more than half of respondents said electronic tolling would be an effective way to finance transportation improvements and relieve congestion. And almost two-thirds of voters support raising income taxes on millionaires to balance the state budget if cuts to services can’t do the job.

The survey, which has a 4.3 percent margin of error, comes 13 days after a Quinnipiac University poll found Lamont leading Stefanowski by 8 percentage points.

The League of Women Voters of Westport will hold a debate for candidates for the state senate and house at Westport Town Hall on Monday, Oct. 29 from 7 to 9 p.m.

The event is being co-sponsored by the Westport PTA Council. Carolyn Reimers, president of the LWV of Connecticut, will serve as moderator.