The in-person, registration deadline for those who recently moved to Westport, turned 18, achieved citizenship or are a member or family member of one in the Armed Services is Monday, Nov. 5, registrars said. The registrars’ office will be open Monday through Friday, except holidays, from 9 a.m. to 4 p.m. to facilitate, officials said.

For further information, call (203) 341-1115 or visit the voter registration page at http://www.westportct.gov

Westport Registrars of Voters Marla Cowden and Kevin White announced today that the District 136-2 polling place location will be changed to Coleytown Elementary school, 65 Easton Road, for the Nov. 6 election.

The change is due to the closing of Coleytown Middle School while air quality issues are addressed.

Washington – Democratic Rep. Jim Himes is spending more money on the races of other Democratic candidates than he is on his own, while his Republican challenger Harry Arora, raised less than $9,000 in campaign cash this summer.

According to the latest filings with the Federal Elections Commission, Himes has raised about $2.5 million in his bid for a seventh term in the U.S. House of Representatives, about $255,000 of that amount in the last quarter.

Arora’s campaign has raised about $230,000 so far, and the candidate has loaned his campaign another $500,000. But the hedge fund manager from Greenwich reported raising only $8,536 in the three-month period that ended Sept. 30.

The Himes campaign reported spending $174,000 on operating costs in the last quarter and another $400,000 in contributions to more than 70 Democratic U.S. House candidates. It also made a $250,000 payment to the Democratic Congressional Campaign Committee.

State Rep. Jonathan Steinberg, the Democratic incumbent in the 136th District, and Republican challenger Greg Kraut will face off Monday in a debate at Staples High School.

“We want to encourage students to understand the community politics and the upcoming election,” said Sam Lampert, series president.

Following a national trend, voter registration continues to soar in Connecticut, especially among young people, who traditionally have weak participation in elections.

Although voter registration in Connecticut has surged for all age groups, the biggest increase is among young voters, aged 18 to 25. 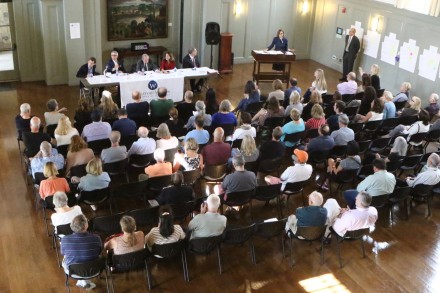 More than 100 persons today attended an economic-oriented debate organized by the Westport Weston Chamber of Commerce involving four state legislative candidates at Branson Hall, Christ & Holy Trinity Church. The topics mainly focused on transportation, infrastructure, and the pension and deficits economic challenges. Among the four candidates, the only two opposing each other were in the 136th Assembly District—Westport residents Republican challenger Greg Kraut and Democrat incumbent Jonathan Steinberg. They repeatedly engaged in a contentious back and forth, each accusing the other of not being truthful in their campaign rhetoric. (CLICK TO ENLARGE) Dave Matlow for WestportNow.com

The Westport Weston Chamber of Commerce Wednesday hosts a candidate debate for State Senate and House of Representatives.

The discussion about business issues will take place at Branson Hall, Christ & Holy Trinity Church from noon to 1:30 p.m.

The session will be moderated by Alternative Disputes Resolution Attorney Jay Sandak, from the law firm of Carmody, Torrance, Sandak and Hennessey. 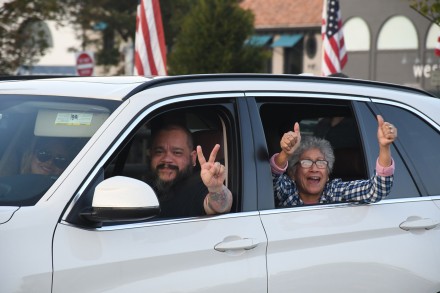 Passersby indicate their approval and support of demonstrators today on the Ruth Steinkraus Cohen Bridge in Westport’s center. The protest following the Kavanaugh Supreme Court approval. (CLICK TO ENLARGE) J.C. Martin for WestportNow.com 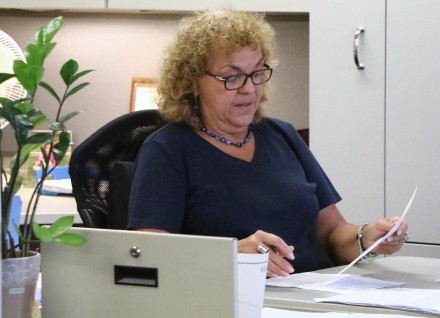 Town Clerk Patricia Strauss announced today that absentee ballots for the Nov. 6 election are now available at her office. (Closed Monday for Columbus Day) Applications can be requested in person, by calling (203) 341-1110, or downloading a form online HERE. Deputy Town Clerk Ruth Cavayero (above) said 432 absentee ballots have been distributed as of today. “It was more brisk than usual for similar types of elections,” she said. (CLICK TO ENLARGE) Dave Matlow for WestportNow.com