First Selectman Jim Marpe said today Westport is responding cautiously to a state request for town budget information for fear it may be part of a “picking our pockets” effort to help solve state budget woes.

He told a Board of Selectman meeting that he had received a letter on Monday from Ben Barnes, secretary of the state Office of Policy Management, requesting the information.

Barnes asked about the general fund total balance and unassigned fund balance as well as supplemental information on the potential impact of the state budget problems and Westport’s contingency plans to deal with them, Marpe said. 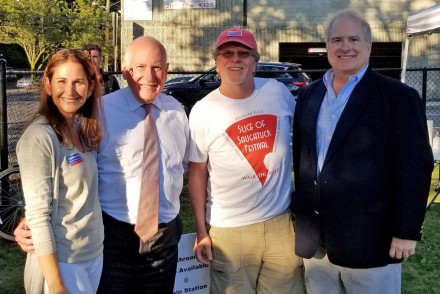 The race for Westport’s first selectman in November got narrower today with John F. Suggs, a 10-year member of the Representative Town Meeting (RTM) announcing his run as an Independent and filing his candidacy with the Office of the Town Clerk. 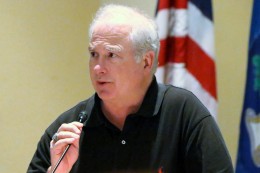 John F. Suggs: wants to get above “partisan bickering and finger-pointing.” (CLICK TO ENLARGE) Dave Matlow for WestportNow.com

Others vying for the top post are Republican incumbent Jim Marpe and Democratic challenger Melissa Kane, also an RTM member.

“I was approached by people from both parties to consider it, people whom I respect who asked if I would consider running as an Independent,” said Suggs “I respect them, and I gave it serious consideration. I talked to my family, and I decided I would do it.”

Suggs, who changed his voter registration from Democrat to unaffiliated, said the main reason he is running is to “get above the partisan bickering and finger-pointing” at a time when of fiscal challenges.

Washington – Gov. Dannel P. Malloy today lauded the U.S. Environmental Agency’s reversal of its decision to delay a new rule that would lower the level of ozone emissions permitted from fossil-fuel burning, such as the exhaust from auto tailpipes and power plant smokestacks.

The new Obama-era rule was scheduled to be implemented on Oct. 1, but EPA Administrator Scott Pruitt decided in June to hold off implementing that rule for about a year to study its impact. A provision in the Clean Air Act allows for the delay of implementation of new regulations if the agency needs to collect more information.

Late Wednesday, Pruitt decided to allow the tougher standards for ozone emissions to be put into place as scheduled.

“This reversal of direction bodes well for the people of Connecticut and for all those fighting for clean air in America,” Malloy said.

After years of effort, the Town of Westport tonight succeeded in gaining approval to trim employee retirement benefits that a town negotiator said could eventually result in $1.3 million or more in annual savings.

By a vote of 30 to 0 with one abstention, Westport’s Representative Town Meeting (RTM) voted not to reject an arbitration award involving a pension plan for 13 different municipal and Board of Education unions — not including certified teachers and administrators.

The police and fire unions have had separate pension negotiations, and a fire arbitration decision is expected soon, according to town officials.

The RTM vote culminated an effort dating back at least six years to reduce employee retirement benefits to bring them more in line with the private sector, said Floyd J. Dugas, labor counsel for the town. 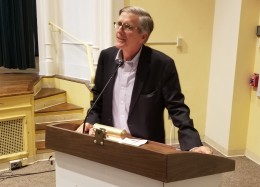 Wieser, who is chairman of the nonpartisan, 36-member legislative body’s finance committee, replaces Velma Heller in his new role. Heller now serves as the RTM’s moderator, replacing Eileen Lavigne Flug who stepped down last month to assume the post of assistant town attorney.

“I’m really pleased to do this,” said Wieser. “I think we do a good job, and we do it well and conscientiously.” He added, “I’m not sure why, but I really like the RTM.”

Wieser, who is the president and CEO of Homes with Hope, was nominated for the deputy moderator’s position by Lou Mall of District 2, a motion that was seconded by Lauren Karpf of District 7.

On a tie-breaking vote by Lt. Gov. Nancy Wyman, the Senate gave final approval today to a state-employee concessions deal after Democratic leaders mollified three dissenting colleagues with a promise to make a good-faith effort for fiscal reforms.

Uniting all 18 members of the caucus hinged on the willingness by Senate Democratic leaders to at least endorse in concept a dozen fiscal and collective-bargaining reforms sought by three wary Democratic colleagues, any one of whom held the power to kill the deal by voting with Republicans in the evenly divided Senate.

”I’m very pleased that we achieved Democratic unity on this proposal today, and it now helps set us up for the remainder of what will be very difficult budget negotiations,” said Senate President Pro Tem Martin M. Looney, D-New Haven.

The show of unity did not go beyond the vote. The three holdouts — Sens. Paul Doyle of Wethersfield, Joan Hartley of Waterbury and Gayle Slossberg of Milford — skipped a post-session news conference with Looney and other Democrats, a sign of remaining difficulties in resolving an impasse that has left Connecticut without a budget for 31 days.

As Connecticut begins its second month without a state budget next week, the cost to cities and towns will take a big leap, topping $100 million.

And while Gov. Dannel P. Malloy’s administration warned the toll on municipalities gets much worse in September and October, the governor and his fellow Democrats in the legislature are nearing gridlock, weighing higher sales taxes against reductions in local aid.

The administration confirmed Thursday that, absent a budget, it will not release the $78 million in sales tax receipts due Tuesday to communities as part of a revenue-sharing program enacted two years ago.

The budget standoff already cost municipalities $30 million in road repair grants in July. And if it continues until Sept. 30, property tax relief grants that sent $182 million to cities and towns last fall also would be withheld.

The state’s affordable housing statute 8-30g has long been the bane of local municipalities because it allows developers to override zoning regulations if a municipality does not have 10 percent of its housing stock deemed affordable. 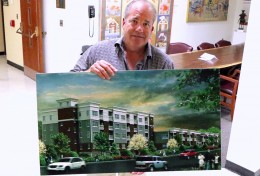 Developer Philip Craft of Easton shows off a redesign of his proposed four-story affordable housing complex at 1177 Post Road East, which he presented to the Representative Town Meeting last October. (CLICK TO ENLARGE) Dave Matlow for WestportNow.com

Westport is one of those towns, and 8-30g has been on the mouths and minds of local officials for years. The fear is that an unscrupulous developer could use it to ride roughshod over zoning regulations by providing just a small percentage of affordable units.

In the meantime, towns have been seeking four-year moratoriums to reach the state mandated housing stock goal by way of points based on affordable housing units in place.

On Monday, concerns over 8-30g lessened, with 138 of the state’s 169 municipalities not at the 10 percent goal catching a break.

The House of Representatives today narrowly approved the state employees’ concessions deal that is expected to save as much as $1.57 billion this fiscal year and next combined.

The Democrat-controlled House voted 78-72 almost entirely along party lines to endorse the deal.

The concessions package, which workers ratified earlier this month, tentatively is scheduled to go before the Senate on July 31.

Meanwhile, House and Senate Republican leaders objected to today’s vote. They argued that nonpartisan analysts — who hadn’t received all documentation from Gov. Dannel P. Malloy’s administration until last Friday — were unable to conduct a full review.