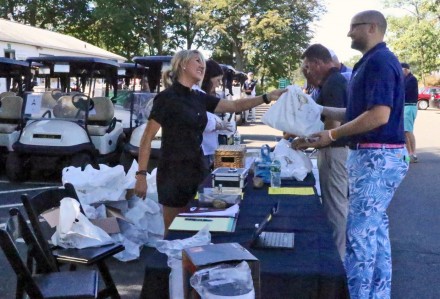 More than 90 golfers gathered at Longshore Park today in support of the fifth annual Club House Cup tournament fundraiser to benefit Friends of Westport Parks & Rec. According to co-organizer Chuck Haberstroh a goal of the event is to “raise awareness of the need for a new clubhouse.” Pictured is volunteer Kim Ebbesen handing a gift bag to Haberstroh.  (CLICK TO ENLARGE) Dave Matlow for WestportNow.com 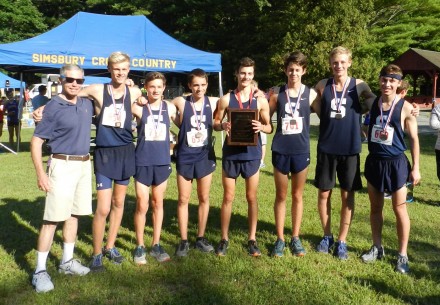 The Staples Boy’s Cross-Country team today demonstrated why they are showing up in national rankings this season with a dominant performance at the 37th Stratton Brook Invitational in Simsbury. The seven members of the varsity team all placed in the top 15 of the 73-person field. Staples seniors Will Landowne, Ben Seiple, and Christian Myers led the way taking second, third, and fourth place respectively. In a sport in which the low score wins, the Staples varsity team took the title, scoring 30 points to the 77 points of second place Bristol Central.  The JV team’s dominance was even greater, with the team taking first through seventh place in the 193-runner field. The team will be gearing up for next week where they will have their first competition against other nationally ranked teams. (CLICK TO ENLARGE) Contributed photo 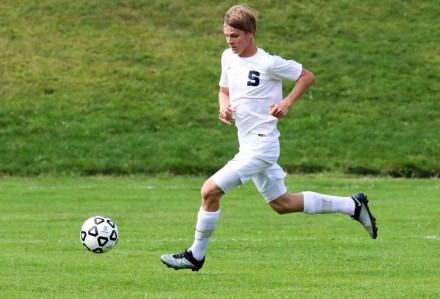 Will Birch (above) contributed three assists, and Anton Mahr scored twice — -including a perfectly timed side volley —- as the Staples boys soccer team today shut out Wilton 4-0. The large Loeffler Field crowd was also treated to goals by Steven Frost and Sam Liles, an assist by Azam Plummer, and excellent midfield control by Timmy Liles, Matt Engler and Patricio Perez Elorza. The Wreckers —- now 2-0-2 —- travel to Trumbull on Tuesday, for a 6:30 p.m. match. (CLICK TO ENLARGE) Alan Frost for WestportNow.com 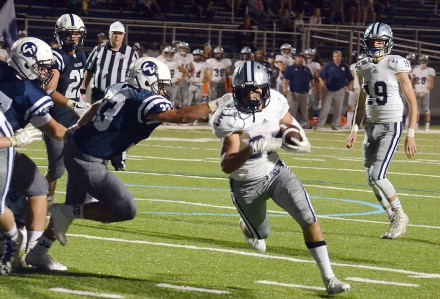 UPDATE Staples junior Timmy Luciano gains ground tonight in a 49-3 win over the Wilton Warriors at Wilton. Senior running back Harris Levi once again was a standout, following up last week’s four touchdowns with four more tonight. Staples next takes on Brien McMahon at 1:30 p.m. Saturday, Sept. 23 at home. (corrects name of player in photo) (CLICK TO ENLARGE) J.C. Martin for WestportNow.com 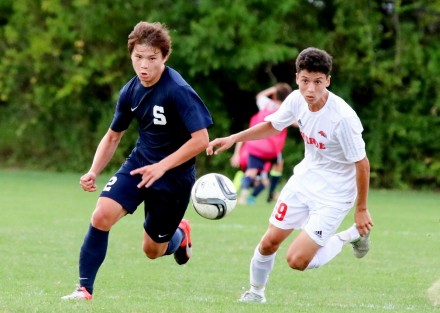 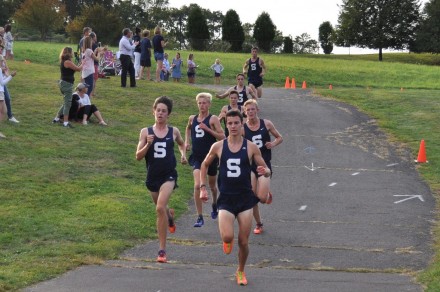 The Staples’ Boys Cross Country team today swept a home meet with wins over Wilton, Stamford and St. Josephs. The team finished eight runners ahead of the first finishers from the other teams. (CLICK TO ENLARGE) Contributed photo 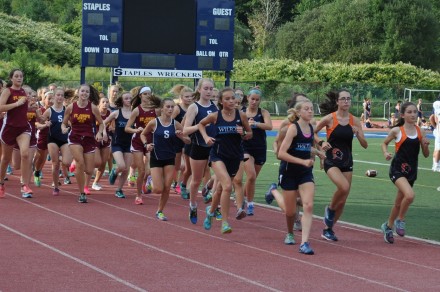 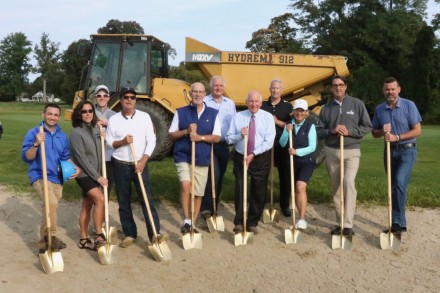 Parks and Recreation Director Jennifer Fava and others gathered today for a groundbreaking ceremony at the 12th green of th Longshore Club Park golf course for the start of the construction phase of the Bunker Improvement project. “We’re starting the project on the 12th and 13th greens and will complete all 18 by June,” she said. The project consists of the redesign, elimination and addition of bunkers for improved playability and maintenance, installation of bunker liners, and the installation of new sand. (CLICK TO ENLARGE) Dave Matlow for WestportNow.com 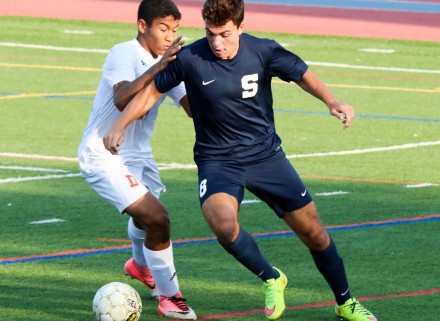 An early season matchup of Staples and Danbury—two of the top teams in the FCIAC ended with a fair result: a 0-0 draw. Midfields and defenses dominated, with Chris Martenson excelling at center back for the Wreckers, and Teddy O’Kane earning the shutout in goal. Staples, now 1-0-1, travels to Fairfield Warde on Wednesday (4 p.m.). In the photo, sophomore Tadeo Messenger pressures the Hatter backs. (CLICK TO ENLARGE) Alan Frost for WestportNow.com 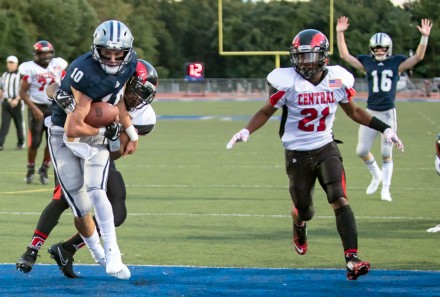 In their season opener tonight, the Staples football Wreckers shutout Bridgeport Central 52-0 at home. Pictured is senior running back Harris Levi (10) scoring one of his four touchdowns. Next up is Wilton on Friday at 7 p.m. at Wilton. (CLICK TO ENLARGE) Chris Greer for WestportNow.com