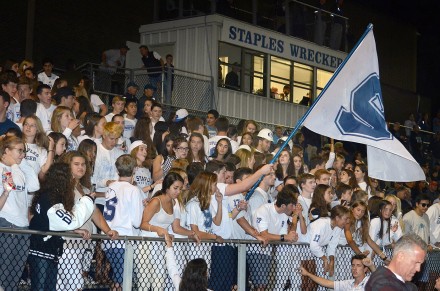 An ethusiastic home crowd had plenty to cheer about tonight as the Staples football Wreckers routed Bridgeport Central 52-0 in the home season opener. (CLICK TO ENLARGE) J.C. Martin for WestportNow.com 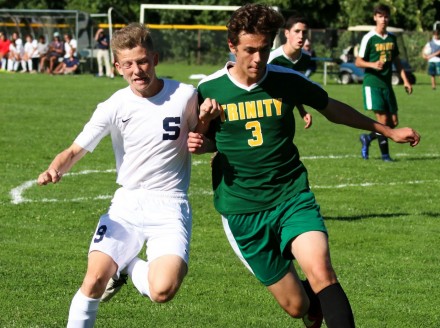 “We are very excited to be starting this long awaited project,” said Fava.

“Although we will be working closely with Turco Golf Inc. and our architect, Doug Smith of Golf Design Unlimited, to minimize the impact to our golfers, we will be providing discounted weekday greens fees while weekday construction is taking place. Weekend and holiday rates remain the same.”

With morning and afternoon sessions, start times are scheduled for 8 a.m. and 1 p.m., with lunch in the pool area, followed by 5 p.m. cocktails, dinner at 6:30 p.m. and followed by a raffle and prizes, organizers said.

The tournament honors the late Luciano, a native of Saugatuck and a lifelong town resident who joined the Police Department in 1937, becoming chief in 1957. Luciano, a strong supporter of PAL, was instrumental in establishing the Connecticut State Police Academy. He died in 1970.

According to organizers, proceeds from the event fund athletic and scholarship programs for children from Westport and surrounding communities. 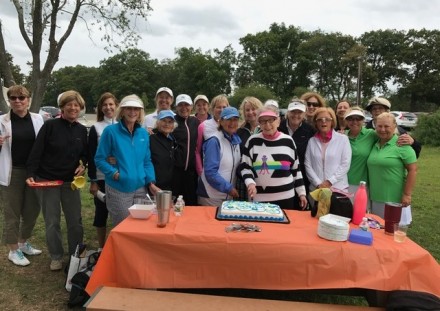 The Longshore Women’s Golf Association (LWGA) held its Caryl Beatus Member Tournament today at Longshore Club Park despite not the best weather, cloudy and cool. The tournament is named in honor of Caryl Beatus (c., black and white stripes), one of its longest serving members. (CLICK TO ENLARGE) Contrbuted photo 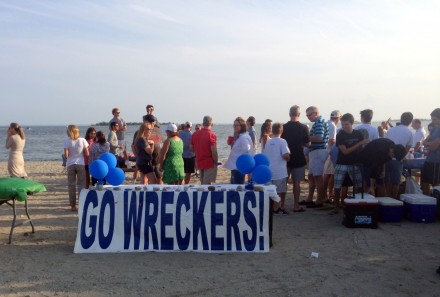 More than 100 persons late today attended the annual Staples High School Gridiron Club beach party at Compo’s South Beach, to celebrate the upcoming Wreckers football season. According to Gridron Club members, the gathering is held on the final Sunday every August. The Wreckers play two scrimmages this week and the season opener is scheduled for Friday, Sept. 8 against Bridgeport Central at home. (CLICK TO ENLARGE) Dave Matlow for WestportNow.com 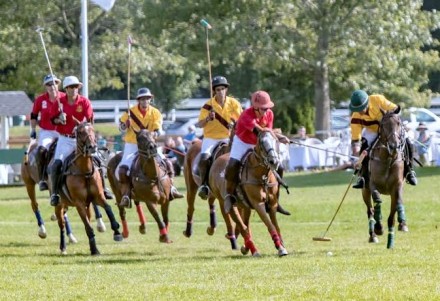 Westport’s Fairfield County Hunt Club today played host to the eighth annual competition for the Gold’s Dragoons Polo Cup, a match against New York’s Squadron A Club. Final score was Gold’s Dragoons (in red) 6, Squadron A 4 (technically 6 to 4.5 given the 1.5 handicap given to Squadron A). The match was preceded by a tailgating party with some of the guests in outfits recalling the 1930s founding of the Gold Dragoons. (CLICK TO ENLARGE) Chris Greer for WestportNow.com 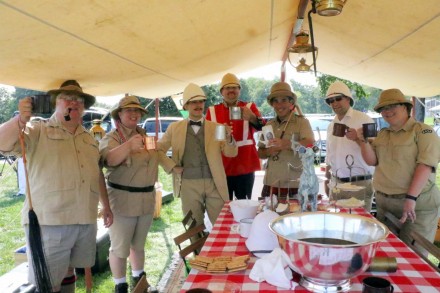 Members the Djin (gin) Club, a group within the Fairfield Hunt Club, were dressed appropiately for today’s eighth annual competition for the Gold’s Dragoons Polo Cup, a match against New York’s Squadron A Club. Gold’s Dragoons, formed in the early 1930s, was selected to honor one of Connecticut’s first mounted colonial militia units, founded in 1660 by Maj. Nathan Gold of Fairfield, whose troop was chartered under the seal of King Charles II. (CLICK TO ENLARGE) Dave Matlow for WestportNow.com 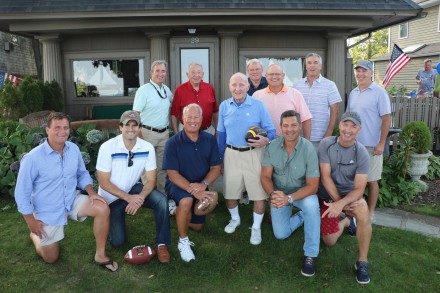 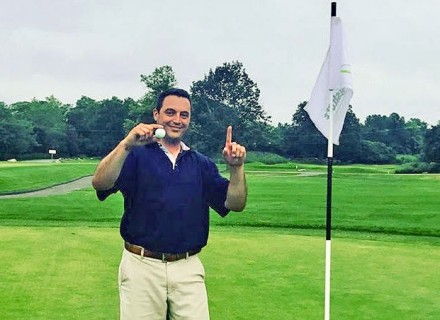 Longshore’s Assistant Club Pro Chris Davies shot a course record-tying 59 on Wednesday.  Davies’s 59 was his career low, beating his previous low of 63 by four strokes and tying the course record held by former Head Professional John Cooper and local standout player Andrew Ga,i who is now a professional competing on the Mini Tours. The round was highlighted by a sizzling stretch where Davies made the turn going eagle-birdie-eagle on holes 8 thru 10, including an ace on the short par-3 8th. (CLICK TO ENLARGE) Contributed photo