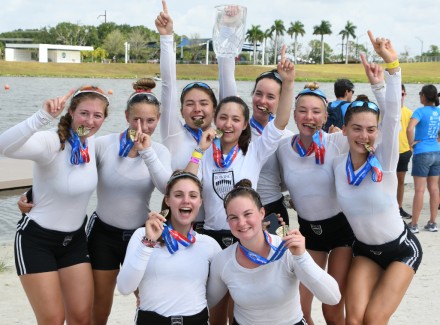 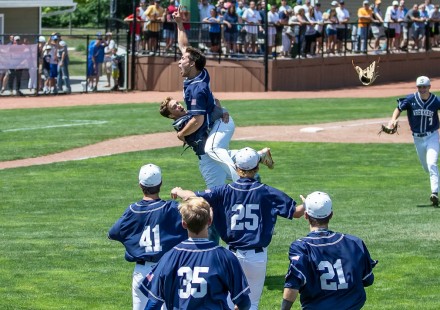 Staples pitcher Chad Knight leads the celebration today after the Wreckers defeated Southington 3-0 at Middletown to win the CIAC Class LL title. Knight, who has committed to Duke and was a New York Yankees 31st round draft pick, struck out 10 and gave up three hits to earn the win. (CLICK TO ENLARGE) Chris Greer for WestportNow.com 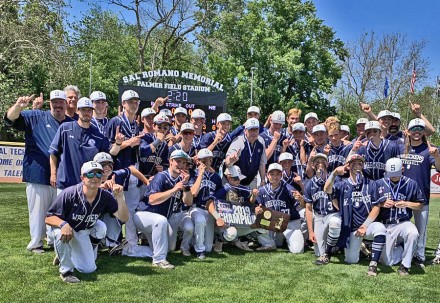 The Staples High School baseball team today shut out Southington 3-0 to win the Class LL CIAC state championship. In a game played at Palmer Field in Middletown, Staples ace Chad Knight struck out 10 and gave up just three hits as he pitched a complete game to give the Wreckers their second title in three years. Staples was ranked No. 5 and Southington No. 3. (CLICK TO ENLARGE) Chris Greer photo 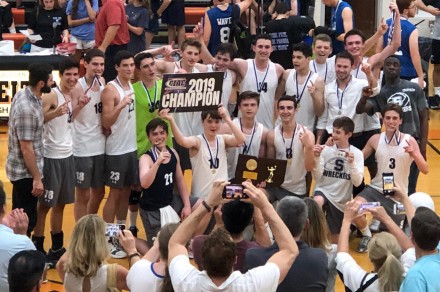 The Staples High School boys volleyball team today defeated Darien 3-2 at Shelton to win the 2019 CIAC Class L Boys Volleyball state championship for the second year in a row. It was sweet revenge for the No. 4 seed Wreckers, who had 16 wins and three losses during the regular season and fell to No. 3 seed Darien 3-1 in the FCIAC final last month. (CLICK TO ENLARGE) Contributed photo 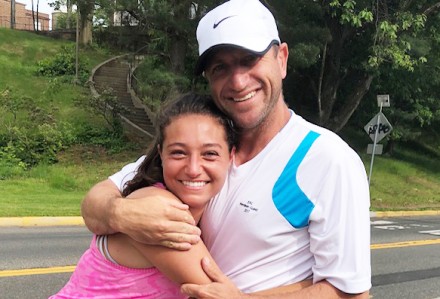 A member of the legendary 2013 Westport Little League team that went to the Little League World Series, Knight is a four-year letterwinner at Staples, and has served as the co-captain of his varsity squad for the past two seasons.

Knight was tabbed the 2019 Gatorade Player of the Year for the state of Connecticut. He was named to the Connecticut High School Coaches Association Class LL Division All-State first team in 2019 for the third consecutive season. He was also named as the FCIAC Player of the Year to close out his final prep campaign, marking his third straight year receiving the honor.

In advance of the draft, numerous baseball writers said Knight was unlikely to be wooed away with what the majors were willing to offer.

The Staples varsity baseball team shutout Cheshire 3-0 tonight in the CIAC Class LL semifinals to advance to the finals.

Senior Chad Knight struck out 10 and gave up three hits in the complete-game victory at Waterbury’s Municipal Stadium. He also hit a solo home run.

Staples will face Southington in the championship game Saturday at noon at Palmer Field in Middletown.

Knight is part of the team that went to the Little League World Series in 2013. During the series, he batted .409 with three home runs and 11 RBIs and pitched to a 3.07 ERA. 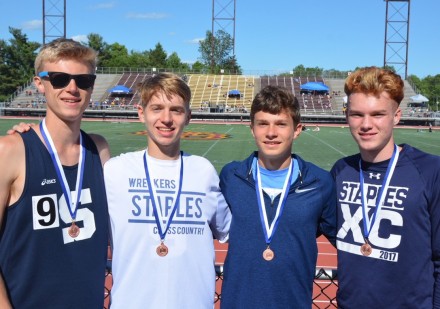 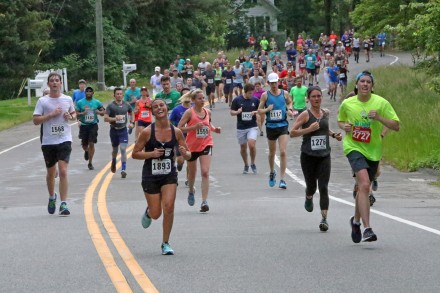 Participants in today’s 13.2-mile Fairfield half marathon prepare to make a turn at the interaction of Greens Farms Road and New Creek Road in Westport, the unofficial half-way point. The annual event began and ended in Fairfield with thousands registered to take part. (CLICK TO ENLARGE) Dave Matlow for WestportNow.com 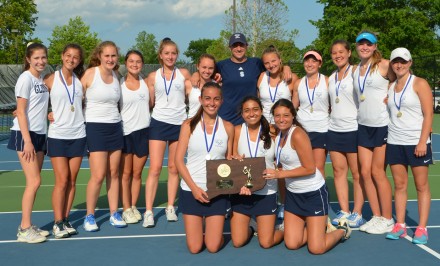 Following a regular undefeated season (17-0) and FCIAC title, the Staples High School varsity girls tennis team today beat Wilton to capture their second state championship in a row and finish the season 24-0. The 5-2 win over No. 6 seed Wilton to take the Class L title was played at New Canaan. (CLICK TO ENLARGE) Contributed photo