Charlie Karp, who dropped out of Staples High School to make his mark in the music world, becoming an award-winning singer, songwriter and guitarist, died March 10. He was 65. 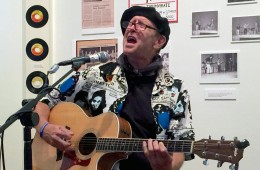 Charlie Karp appeared in 2017 at the Westport Historical Society. (CLICK TO ENLARGE) Lynn U. Miller for WestportNow.com

A resident of Fairfield, where he had a recording studio, his professional career began in 1970, when he was chosen to record with Buddy Miles as a teenager.

Miles was Mercury Record’s number one R&B artist and renowned drummer at the time.  Karp recorded four albums with Miles in two years including the legendary “Them Changes.”

He toured internationally with Miles, including opening for Jimi Hendrix. In 1972, he left to form his own band White Chocolate with David Hull on bass.

The group was quickly signed by RCA Records. Later that year he also recorded “Vindicater” with Arthur Lee of Love fame on A&M records.

During half a century of music making, Karp had an up-close look at some of the all-time rock greats, while witnessing the transformation of the music industry.

Beside producing his own albums, he was an Emmy award-winning producer for sports networks, documentaries, and feature films.

He is survived by his mother Martha, sister Eleanor, sister Alice, brother Thomas, and father Marshall.

Musical tributes at Seagrape in Fairfield, and Levitt Pavillion in Westport, to be announced.

For more information, how to donate online, refer to
https://donatenow.networkforgood.org/karpmemorial and go to the donations page