Westport Police Chief Foti Koskinas says “there needs to be a serious conversation” about the rise in pistol permits in Westport at the same time there has been an increase in mental health calls. 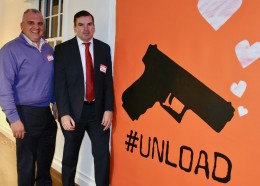 Westport Police Chief Foti Koskinas (l) and Fairfield Police Chief Gary MacNamara Friday night at a Farfield fundraiser to buy back guns in Hartford to be turned into works of art. (CLICK TO ENLARGE) Helen Klisser During for WestportNow.com

“The people who apply for permits are good, responsible, contributing members of society,” Koskinas said in an interview. He added that the biggest threat Westport officers encounter are illegal guns typically uncovered during traffic stops.

He disclosed that Westport currently has close to 6,750 registered weapons and almost 1,000 Westport residents have carry permits.

“But when you see an increase in mental health issues and gun ownership, we’re also afraid that those two are going to cross,” Koskinas said.

“The gist of it is, we need to have a conversation about mental health,” he said.

The chief said there has been a rise in calls about depression, attempted suicide, as well as those affected by prescribed mood altering drugs.

According to Koskinas, there has been a “60 to 70 percent” rise in Westport pistol permits since 2001.

That year 26 such permits were issued, a number that climbed modestly or stayed the same until 2009. That year it jumped to 72 for fear that former President Barack Obama would curtail gun rights.

In 2012 that number jumped to 102 due to fears of restrictions because of the Sandy Hook massacre, plus Obama’s reelection.

Westport currently has 6,741 registered weapons, “ones we know about,” said Koskinas. That number represents .49 percent of 1,386,300 guns registered in Connecticut.

At present there are 996 Westport residents with carry permits. Most Westport gun owners have one to several firearms, a rare few with multiple.

Names of permit holders are not public under a state statute, which exempts such information from disclosure under the Freedom of Information Act.

“I’m not anti-Second Amendment,” Koskinas said. “I just think we have to be responsible. We have to think long term, especially at a time when we’re seeing so much gun violence nationally.”

Someone with more than 100 guns, for example, would not trigger as many concerns since “people can do just as much damage with a few,” the chief said.

Koskinas made his comments about guns and mental illness after he and Fairfield Police Chief Gary MacNamara signed a letter Friday opposing a law making concealed-carry permits valid across state lines. The legislation passed the House Wednesday by 231-198 and will be taken up by the Senate.

U.S. Sen. Richard Blumenthal (D-CT) told a vigil against gun violence Sunday night at Westport’s Unitarian Church that he expects the legislation will not make it through the Senate. Koskinas was among those attending the event.

“I’m not a fan of it (the concealed-carry legislation) at all because every state is not as strict as we are; not all states are the same,” Koskinas said.

“Here in Connecticut we require in depth background checks and firearms safety training,” the chief said. “We would now be forced to allow individuals to carry guns from states that may not employ these rigorous requirements.”

Another flaw he sees with the proposed national reciprocity law is that individuals with out-of-state permits would now be able to carry in states and cities where it is difficult, if not nearly impossible, for the state’s own residents to get carry permits, such as in New Jersey and New York City.

At the same time, however, the current patchwork poses legal dilemmas for permit holders who live near a state that does not recognize the permit.

A Connecticut permit holder who lives in New Canaan, for example, and drives a quarter of a mile for coffee in Scott’s Corners, New York would be guilty of a felony. The same would hold true for permit holders who hop from Connecticut to Massachusetts and Rhode Island.

“Officers have a level of discretion,” Koskinas said. “If someone has just driven across to a clam shack in Rhode Island, there’s a certain level of understanding. But if they’re going there for a couple of days, that’s a different story.

“Before we talk about national reciprocity, the state should look at it with surrounding states.”

Still, mental health remains the unknown in many situations. The reason: privacy laws prohibit police from checking the mental health records of people applying for permits..

“If someone applies for a pistol permit today, I’m not going to know that two months ago you were at Silver Hills (Hospital, a psychiatric facility in New Canaan),” he said.

Only court-ordered admissions to such facilities appear on searches.

At the same time, other emotionally charged situations that police encounter, such as domestic violence calls, are exacerbated when one or both of the parties is a gun owner, according to the chief. He said officers may know who has a gun if they are responding to a domestic violence call at a residence, “but not if it’s a call to Compo Beach or a parking lot.”

“Again, I’m not anti-Second Amendment; people have the right to defend themselves,” he said. “But we need to have a conversation in town about mental illness. It’s gun common sense.”