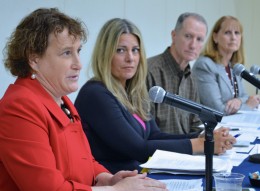 Elaine Whitney (l), who heads the Board of Education’s facilities committee, explains why she favors keeping staff and students out of Coleytown Middle School for the rest of the year. (CLICK TO ENLARGE) Jarret Liotta for WestportNow.com

That was the recommendation Schools Superintendent Colleen Palmer made to Board of Education members Monday night who quickly approved it 7-0.

And now the school administration embarks on an estimated eight-week process to get six portable classrooms approved, purchased and erected at BMS to relieve overcrowding that some parents believe is adversely impacting the educational experience for students.

Palmer said preliminary reports by outside consultants show that excessive and ongoing water seepage is damaging the 50-year-old CMS building, which was temporarily closed at the end of September owing to concerns about air quality.

“I don’t think we can return to the building this year,” Palmer declared “with great disappointment.”

She said that even if initial remediation of the most current water damage was done, there was no telling what a predicted snow-filled winter would bring.

She said that, along with problems in the building itself, the foundation remains such that drainage from the parking lot and surrounding grounds merely make matters continually worse.

Palmer said keeping the building closed to students, however, would give them the chance to begin work in the spring, making it possible to have it opened in time for the next school year, pending the discovery of further issues. 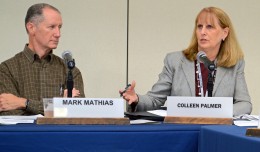 -Board of Education Chairman Mark Mathias listens to Superintendent of Schools Colleen Palmer. (CLICK TO ENLARGE) Jarret Liotta for WestportNow.com

“There are multiple challenges,” said Elaine Whitney, board member who leads the Finance and Facilities Committee, noting they were “more significant than we’d realized.”

Another key issue at this time for some parents — many of whom have been sharing their frustrations via email with school officials — are matters relating to Bedford’s cramped conditions and scheduling challenges.

Four portable classrooms have been located by school officials around Baltimore, Maryland, while two others are said to be up in Maine, Palmer said.

These, however, have not been reserved and it could potentially be a race to get them here, each at an estimated cost of $70,000, plus installation peripherals.

“Schools are competing,” Palmer said, owing to some violent storms around the country that have increased demand.

Ted Hunyadi, director of facilities for the school administration, said numerous considerations were in play regarding their potential placement at Bedford, including town permits, handicap accessibility and power connectivity.

“There’s a whole litany of things to look at,” he said.

Ted Hunyadi, director of facilities, tells the board about adding portable classrooms to BMS, as PTA leadership members listen. (CLICK TO ENLARGE) Jarret Liotta for WestportNow.com

Each portable would account for 700-square feet of classroom space, with four tentatively to be placed by the bus loop at the front, and two to the left of the building near the fields.

Meanwhile, Assistant Superintendent Anthony Buono said a new schedule was currently being vetting among administrators that officials are hoping will improve space and time issues at Bedford.

“We all recognize that the current schedule has glitches … so we’ve made some corrections,” he said. He added that some teachers have been forced to travel between BMS and SHS in order to teach adjacent classes and have not had the time to do so.

The new schedule will also allow time for students to have homeroom periods in the morning, he said, and would free up more space in the library.

“These are the big things that we’re looking to resolve,” he said, noting there were other smaller issues that needed work in the long run.

“We’re looking to implement it next week, potentially on Monday,” Buono said.

The administration will also be purchasing 300 half-size lockers for the displaced CMS students to use at Bedford.

“I think space will continue to be a pressure point … It’s going to be a little tight,” Buono said.

There were questions raised by parents about adding modular classrooms to SHS, but Palmer downplayed the need. She said there was much more space to use there, and also said the addition potentially “creates other security issues at Staples.”

The board voted unanimously to seek approval for the six portable classrooms from the town governing bodies, and also for a temporary flexible covering that would connect them to the main building.