UPDATE The man behind the fake Bernie Madoff blog that has created a following on Wall Street and elsewhere is Westporter Jay Berkman, CNBC said today. 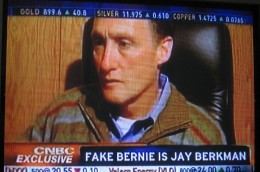 CNBC said Berkman, a marketing and PR consultant, started posing online as Madoff on Dec. 15, shortly after finding out that his father, a Florida retiree, had lost “a significant amount” of money in the alleged Ponzi scheme by the securities dealer.

“It was an emotional event, and that sort of drove me to try and do something creative about it,” Berkman told the cable business network.

He vented that emotion by creating a caricature of Madoff and starting a blog, much like Dan Lyons created Fake Steve Jobs, CNBC said. CNBC broadcast an interview with Berkman and reporter Jane Wells wrote about him on her blog.

Berkman, 50, told WestportNow he decided to “come out of the closet” and admit that the Madoff blog was his creation and contacted a friend at CNBC.

Asked how much his father lost to Madoff, he replied: “a lot.”

Berkman said he created the blog as “a catharsis.”

Disclosure of the Westporter’s involvement in the fake blog followed by several weeks word that Madoff, who is under investigation for an alleged $50 billion Ponzi scheme, had a connection to Westport National Bank. (See WestportNow Jan. 2, 2009)

The bank sent a letter to clients and employees after two law firms in Florida said investors had retained them to investigate claims that the bank had sent customer funds to Madoff.

The bank assured customers and employees that it acted only as a custodian for customers investing in Bernard Madoff Investment Securities.
____
Dave Matlow contributed reporting for this story.

One thought on “CNBC: Fake Bernie Madoff Blogger is Westporter”