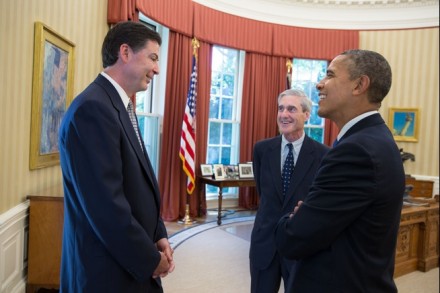 While still a Westport resident, now former FBI Director James Comey traveled to the White House in June 2013 for President Obama’s announcement of his appointment to succeed Robert Mueller (c). They have been friends for years, including dinners and golf outings, a relationship that analysts said would not please the White House with the Department of Justice announcement tonight that Mueller has been appointed a special counsel to look into the Russia-Trump relationship. (CLICK TO ENLARGE) Official White House Photo by Pete Souza