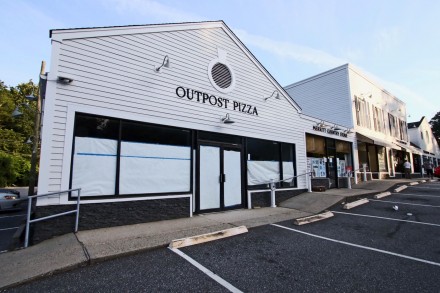 Outpost Pizza, a takeout and eat-in pizza shop, opens in the fall at 331-333 Main St. next to the Merritt Country Store, according to owner Joe Dedovic.  An Easton resident, Dedovic, said he also owns Outpost Pizza, 365 West Ave, Stamford for the past 15 years. He added, “We know the pizza business. I learned a lot from my father, Tom, who owned two pizza locations in Brooklyn from the 1970s till 1985. He’ll be helping me here—we’re a family-owned father and son operation.” He said the. Westport location will have a “New York feel” with a seven-foot display case featuring many pizza varieties including a hot-oil pizza.”  In addition to pizza the shop also offers sandwiches, salads and, in time, beer and wine. The space was previously occupied by Community Dry Cleaners, which closed one year ago after more than 30 years. (CLICK TO ENLARGE) Dave. Matlow for WestportNow.com