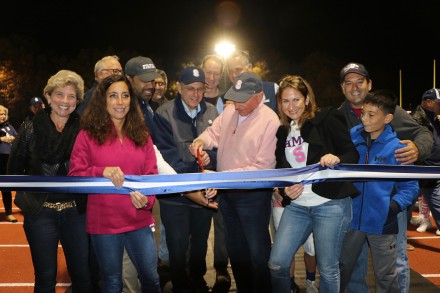 First Selectman Jim Marpe today led dignitaries in cutting the ribbon at the refurbished track and field at Staples High School. The facility will be named after longtime track coach Laddie Lawrence once all the naming formalities are completed. The ceremony took place before this year’s homecoming varsity football game which saw the Wreckers fall to New Canaan 41-21. The track work had caused the football team to play three of its home games before tonight at other venues. (CLICK TO ENLARGE) Dave Matlow for WestportNow.com