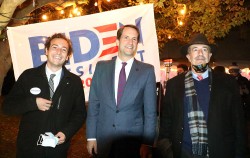 Democratic incumbents sailed to victory in Westport tonight with U.S. Rep. Jim Himes, state Sen. Will Haskell and state Rep. Jonathan Steinberg besting their Republican opponents here by around 1,000 votes or more at the polls.

The initial results do not include mail-in or absentee ballots.

The only other Connecticut representative to serve sixth term was Sarah Crawford during the 1960s, Steinberg said.

Locally, Haskell defeated Republican Kim Healy by 4,089 to 2,867. She also garnered 114 running as an Independent.

“I’m feeling cautiously optimistic,” Haskell said at an election night party at Wakeman Town Farm prior to the release of the poll numbers. “This is a district that hasn’t been held by a Democrat since the 1960s.”