Despite one minor incident where a voter refused to don a mask, things continue to run smoothly at the polls in Westport. 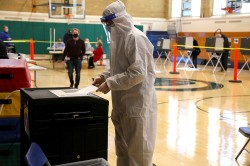 Tom Holoubek-Sebok casts his vote at Coleytown Elementary School in the early afternoon. (CLICK TO ENLARGE) Jarret Liotta for WestportNow.com

“We’ve had a lot of traffic,” said Pamela Joseph, moderator for 132-2 at Coleytown Elementary School.

She described a good flow of people, beginning with a large number in the morning, courteous voters, and a hard working team of volunteer election officials helping things to run smoothly in the gymnasium.

“There was one woman who refused to wear a mask,” she said, noting it necessitated some quick-thinking compromise to avoid a confrontation.

“We don’t want to disenfranchise people to vote,” she said, “and I didn’t want to be confrontational with her.”

Instead, they allowed the woman—who had already entered the gymnasium and was refusing to comply with the mask ordinance—to quickly complete her ballot off in one corner, which Joseph said was then heavily sanitized by volunteers.

“We offered her curbside voting,” she said, but the woman refused.

Four others did take advantage of curbside voting, however—something that has always been an option for those physically unable to enter the voting space, but now a bit more commonplace for some who need to avoid potential exposures due to immunity issues.

“Outside of that isolated incident, everyone’s been very good,” Joseph said.

Likewise, Long Lots Elementary has had no significant issues, according to Moderator Kevin White, Westport’s longtime Republican registrar of voters.

“When I pulled up they were going down the road on Hyde Lane,” he said of the long line that began the day there.

By lunchtime, however, things were much slower in terms of traffic, though the numbers remained considerable.

White noted that as of 1 o’clock 70 percent of District 136-3’s 4,700 registered voters had cast ballots, including the 1,900 who submitted absentees.

“Not even in the last presidential were we that busy,” he said.

Many voters seemed to have expected the large turnout, or certainly condoned it.

“No excuses,” one voter said as he exited the polls at Coleytown.

“I think that leading up to the election has been a lot of uncertainty,” noted voter Michael Sheldon.”

“Hopefully by the end of tonight—or the very near term—we’ll have the actual election results and the country can move forward,” he said.