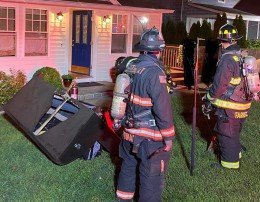 The occupants of a home on Maplewood Avenue said they thought they put out the fire but called firefighters anyway,

When firefighters arrived, the couch reignited, which they quickly extinguished and then brought the couch outdoors, according to reports from the scene.

Firefighters asked for an additional engine to be added to the initial response after the couch reignited.