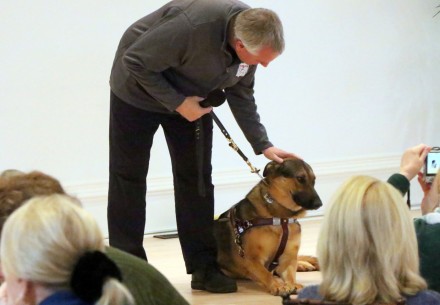 A German Shepherd guide dog named Pierce was the star attraction today at the Westport Woman’s Club lunch. He appeared with Don Overton, a Norwalk native who was blinded in a 1991 battle in Operation Desert Storm in Iraq. “Pierce works loyally for me 24/7 but if I removed his harness, he would know he’s no longer working and would probably be so playful and friendly he’d run into today’s audience and lick your hands,” Overton said. Overton was joined by Eliot D. Russman, president and CEO of the Fidelco Guide Dog Foundation, and G. Kenneth Bernhard, local attorney and vice president of the Fidelco board of directors. (CLICK TO ENLARGE) Dave Matlow for WestportNow.com