Encouraged by a number of area neighbors, the Historic District Commission tonight stated strong opposition to the 81-unit apartment complex proposed at the corner of Lincoln Street and Post Road West. 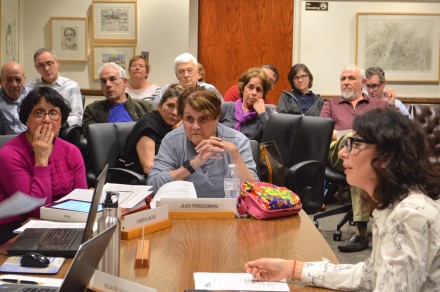 The HDC also gave unanimous support to creation of a new historic district that would include the 13 houses on Lincoln and four adjacent houses on Riverside Avenue.

&#82#8220;The impact of the proposed building will be extremely detrimental to the historic neighborhood’s character and streetscape for homes built in the 1800s and the early 1900s,” says a statement the HDC voted unanimously to relay to the Planning and Zoning Commission.

“It’s practically a miracle that this street is still intact, and we’d like it to stay that way,” said neighbor Joan Miller, with the project calling for the demolition of several structures, including the oldest house on Lincoln.

“We think this is a terrible project,” she said.

John Fallon, an attorney for the developer Cross Street LLC, said in a short presentation that the structures targeted for demolition were not of historic significance. 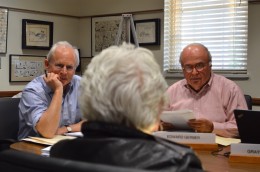 “They appear to have been significantly modified over the years,” he said.

Calling it “a huge, intrusive plan,” Chairman Randy Henkels said the impact on the neighborhood’s historical relevance would be “very detrimental.”

“I think we’re all in agreement,” Commissioner Judith Freedman said.

Hoping that the third time is a charm, residents are once again striving to turn the neighborhood into a historic district—something they first attempted in 1988.

“That mission was obviously not accomplished, so again, here we are,” said neighbor Tina Torraco.

“The neighbors are very, very passionate about this neighborhood,” she said, noting that they currently “lie prey” to development.

The proposed development is another project that can potentially sidestep Westport’s zoning regulations under the protection of state statute 8-30g, which aims to foster more low- and moderate-income housing in wealthier communities. 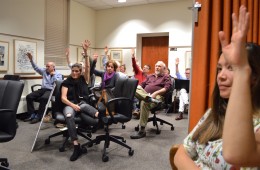 Lincoln Street neighbors express their support tonight for turning their neighborhood into a historic district. (CLICK TO ENLARGE) Jarret Liotta for WestportNow.com

Historic designation could potentially make it more difficult for courts to overturn denial from local governing bodies, should they oppose the plan.

“We openly embrace the need for commercial growth,” Torraco said, “but we also understand that true growth can never be advanced without honoring the history.”

“What is a town’s future without its past,” she said.

“It’s a neighborhood we’re quite proud of,” Torraco said, noting the houses range in age from 1851 into the 1930s, with all standing structures in the current group original.

“If you walk the neighborhood with the residents, you can’t be anything but enthusiastic,” Commissioner Edward Gerber said.

“I think it should be expanded,” Commissioner Robert Weingarten said.

Torraco said it was their intention to do so, but they wanted to start with a group of residents that they knew were on board.

“We have every intention in reaching out and extending that, but we have a starting place,” she said.

Likewise, she said they would retain a consultant to create the documentation necessary to get approval from the state—the next step before returning to the HDC.