Steve Chadwick today found a dead deer in his pond, the fourth carcass he has seen on his Taylor Lane property since he and family moved to Westport in 2011. 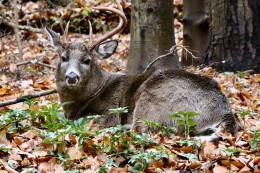 He said he contacted police who arrived at his home in the Greens Farms section and was told the 200-pound, horned buck appeared to have been hit by a high-powered arrow, the kind shot from a crossbow. The arrow had gone clear through it.

“The officer was very nice and tried to help, but he said there isn’t much they can do since the illegal hunting or culling could have happened anywhere in the vicinity,” he said.

“This is the third time we found one in the pond,” he said, adding that a fourth one that he found in his backyard in 2011 had been shot and “shredded by coyotes.”

He also wanted to underscore the fact that Westport has a no hunting ordinance, the only one of 169 Connecticut municipalities to have one.

Though there is a possibility that the deer, like the one hit by a rifle shot last year, could have been shot in Fairfield and traveled a half-mile to his home, Chadwick said he is not so sure.

Hunters licensed by the state Department of Energy and Environmental Protection, track their prey. Chadwick said he is worried that a Westport resident might be shooting deer for simply being nuisances, such as eating expensive landscaping, even payback for Lyme disease.

“We have three kids, and we’re concerned,” he said. “Our house is surrounded by woods, and we have a lot of deer in the backyard.”

As he has done in the past, Chadwick said he will have to use his tractor pull the heavy buck from his pond and take it to the town’s transfer station on Friday, since the transfer station had already closed today.

“I have to keep it for the next couple of days,” he said, adding it will remain on the pond Thanksgiving Day.