Forget the red carpet. This one was blue and framed with white hydrangeas, the school colors. 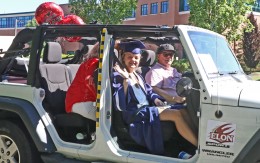 Staples class of 2020 graduates were escorted to the ceremony by family members. (CLICK TO ENLARGE) Dave Matlow for WestportNow.com

In a historic first, Staples High School’s Class of 2020’s 133rd commencement today amid the COVID-19 shutdown celebrated its 437 graduates outdoors in a way that was, well, distinctly Westport.

With the pomp and ceremony of police escort and under crisp azure skies, the first four graduates in cap and gown and holding their diplomas arrived at 10 a.m. driven to the front of the school by their parents in colorfully festooned vehicles.

As the vehicles approached, celebratory hits from “I Gotta Feeling,” “Celebration” and “Happy” pumped out by Staples’ WPPT-FM radio echoed throughout the campus.

As if it were Oscar night, one by one, the first four graduates, stepped from their cars to the roars from the small crowd, the honking of horns and local paparazzi’s continual clicks.

The first were Dylan Robert Curran and his sister Shea Delaney Curran, both high honors students. They were followed by Matthew Christopher Cerrito and Gabriel Isiah Cohen. Amid cheers, each ascended the slightly elevated, about 20-foot long blue carpet in front of Staples entry doors where silver mylar balloons bounced in a slight breeze.

Then each returned to stand in front of the carpet and to face the alma mater.

“You may turn your tassels from right to left,” Thomas said. “You have now graduated Staples High School.

Cheers and horn honks continued, and WPPT sent out another song until the next four stepped out of their vehicles. It was a scene that would play over and over again, nearly 110 times, throughout today.

“It is historic, and we have an amazingly resilient group of students,” said Thomas, adding that while there was initial disappointment among the graduates, “we wanted the chance to celebrate with them.”

In some ways, making up for what had been lost due to the coronavirus broke new ground.

“When you leave through Wakeman Road, it will look like Disneyland,” Thomas said, as the stretch was lined with huge posters and pictures of graduates, the schools they will be attending in the fall and myriad well wishes.

“It’s amazing the way the Westport community has rallied around this class from Main Street to North Avenue,” said Meghan Ward, assistant principal. “It’s a whole testament to the community. And it’s a beautiful day. It’s going to be a party.”

Wearing a face mask, First Selectman Jim Marpe stood on the side of the school entrance and snapped photos.

“We’re doing everything we can to make this special and exciting for the Class of 2020,” Marpe said. “We’re glad we’re able to celebrate in a fun and creative way.”

Though this graduation had no valedictory address, valedictorian Ben Spector, who will be attending the University of Michigan to study chemical engineering, and salutatorian Benji Schussheim, who will major in computer science at Duke, offered their classmates optimism in the school newspaper Inklings.

“My advice for my class would be that the best is still to come,” Spector said.