UPDATE When Westport’s Unitarian Church rededicated its new Black Lives Matter banner last week, replacing the one ripped down in August, the Rev. John Morehouse thanked his congregants and the Westport community for their support. 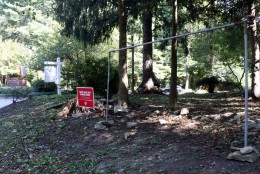 The banner was vandalized again five days after its rededication. (CLICK TO ENLARGE) Dave Matlow for WestportNow.com

“The outpouring of support for this has been absolutely incredible,” said Morehouse, adding that the church received so many donations for a new banner, he had “enough for another if this one comes down.”

Unlike the original roadside one that had been ripped down Aug. 23 and later found torn in half and on the side of the road, the new one has yet to be found, according to First Selectman Jim Marpe.

“The matter is under investigation with the Police Department,” said Marpe, who attended the dedication and rededication for each banner. “Police Chief Foti Koskinas and I are committed to a full investigation to determine what happened, and if possible to identify the perpetrators and to bring them to justice.

“I was proud to participate in the dedication of the second banner, and I am angry it is gone again,” he added.

During last week’s dedication, Morehouse stressed that the banner not be seen as divisive.

“We’re not saying it’s against something else, but for those who feel marginalized. It’s with that spirit that we will rededicate this banner.”

He added if the banner was vandalized again, it would be replaced every time.

In a statement issued Monday, Democratic Selectmen candidates Melissa Kane and Rob Simmelkjaer said: “We are outraged that another act of vandalism has been committed against the Unitarian Church in Westport.

“There is no excuse for destruction or theft of property — no matter what your political point of view. We know that the Westport police will fully investigate this incident, and that the church will remain steadfast in its commitment to social justice.”

This story has been updated with comments from the Democratic selectmen candidates.