He was born on May 26, 1919 in Chicago to Paul Cornelius Croarkin and Margaret Daly Croarkin. His early years were spent in Chicago where he, his parents, and his siblings lived in the home of his grandparents.

He was drafted into the Army in 1941 and was home on leave on Dec. 7, 1941, listening to the Redskins game, when the announcers broke in to say that Pearl Harbor had been attacked and that all military personnel had to return to base.

He served in the 25th Infantry Division from the defense of Hawaii through the occupation of Japan spending the better part of three years fighting in places like Guadalcanal, the Solomon Islands, and the Philippines.

He earned a Bronze Star and a Purple Heart for his service and left the service with the rank of captain.

After leaving the service, Neil embarked on a career in sales and marketing for Union Carbide —- the only company he ever worked for.

While working in Connecticut he met his future wife, Joan Malia, and they were married in 1949. In the succeeding years, they welcomed five children into the family while moving from Hamden to Rye, New York, Mt. Lebanon, Pennsylvania, Arlington Heights, Illinois, and finally to Westport.

In later years. Neil took up tennis and sailing and enjoyed both into his 90s. After retirement he was also the consummate volunteer giving of his time for Meals on Wheels, the Red Cross, the Power Squadron, and the Y’s Men, to name a few. . 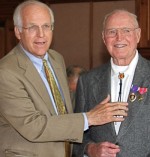 He was also a regular fixture in the Memorial Day Parade either on the Y’s Men float, or in a World War II veteran car, or, in one case, as Grand Marshal. And he was a longtime member of Saint Luke Church where he served as an usher for decades.

A couple of years after being widowed in 1999, Neil became companions with Maxine Hinkle and remained so for the next 17 years until her death in 2018.

Neil is survived by his sister Mary Elmore, his daughter Debbie and sons Paul, Rick and Tom as well as daughters-in-law Ana, Christine, and Kate, eight grandchildren, and one great-grandchild.

He will be remembered as a wonderful father and grandfather, a loyal friend, a frequent volunteer, and for being a really, really good guy.

A memorial service will be held on Saturday, March 30 at 11 a.m. at Saint Luke Church, 49 Turkey Hill Road North.

In lieu of flowers please make donations to Meals on Wheels or to the American Macular Degeneration Foundation.