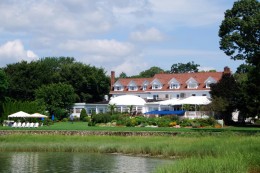 Longshore Hospitality, LLC.  has been approved to operate the Inn at Longshore following approvals by the Board of Selectmen and the Board of Finance to reassign the operating lease, it was announced today.

The lease reassignment follows the announced retirement of Rory Tagert, who has operated the inn for the past 35 years.

Longshore Hospitality LLC is a partnership led by the Greenwich Hospitality Group. The transfer to the new management team was negotiated and structured by Jim Randel of the Randel Law Offices, LLC of Westport. One of the other principals, Michael Ryan, is a Westport resident.

“We’ve greatly enjoyed our 35 years here in Westport running the inn,” said Tagert. “As we’re now ready to retire, we’re passing on the guardianship of this beloved property to Longshore Associates LLC.

“We have full confidence that the Inn is in good hands with a company that has the expertise and resources to further our legacy,” he added.

‘We recognize the importance of the Inn to the Westport community and are honored to accept responsibility for overseeing its operations,” Mallory said. “We are hopeful that over the coming years, we will have the opportunity to invest in renovations and upgrades, thereby elevating the guest experience to Delamar standards.”

According to Mallory, the transition will be seamless. Hotel and events staff, many of whom have been at the property for several years, as well as the catering team led by Westport resident Marc Weber, will remain, he said. Scheduled weddings and banquets will be unaffected, he added, saying the Pearl at Longshore restaurant will continue to stay open.

“The Inn at Longshore is one of the unique, iconic symbols of Westport,” said First Selectman Jim Marpe. “Its extraordinary location has hosted countless weddings, celebrations and civic gatherings—all of which make our town such a special place.

“I want to thank the Tagerts for over 30 years of stewardship of the Inn,” he added. “Because of their proprietorship, Westporters and visitors alike have been able to experience the facilities’ breathtaking views and create special memories at Longshore. I wish them well as they begin the next chapter in their lives.”