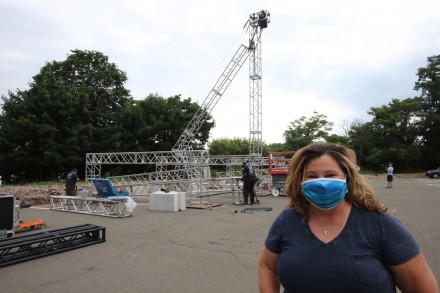 Westporter Marina Derman, president Remarkable Theater, was on hand today as a screen was set up for Friday’s debut drive-in showing at the Imperial Parking Lot of “Ferris Bueller’s Day Off.” She said Remarkable, whose mission is to build a first class art house movie theater in downtown Westport that provides purposeful employment to individuals with disabilities, plans two films a week for the first two weeks. All profits from the showing will support the Westport Woman’s Club, whose annual Yankee Doodle Fair at the Imperial Lot fell victim to the coronavirus. Tickets may be purchased online at https://remarkabletheater.org.  (CLICK TO ENLARGE) Dave Matlow for WestportNow.com 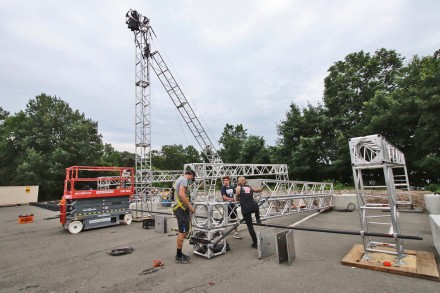 Workers today erect a drive-in movie screen at the Imperial Parking Lot for Friday’s debut showing of “Ferris Bueller’s Day Off” by the Remarkable Theater. The group, which hopes to see an art movie theater in downtown Westport to employ people with disabilities, will be showing the outdoor movies until Labor Day. (CLICK TO ENLARGE) Dave Matlow for WestportNow.com

MoCA Westport will present the renowned American String Quartet in a special outdoor performance on Friday, July 31 at 8 p.m., it announced today. 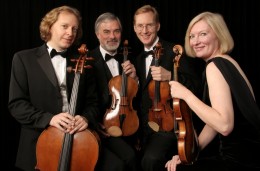 The American String Quartet will perform in an outdoor concert. (CLICK TO ENLARGE) Peter Schaaaf photo

The concert, featuring the music of Mozart, Dvorak and Shostakovich, will take place on an outdoor stage with attendee groups spread six feet apart.

Attendees are asked to bring their own chairs and snacks for the event; drinks and food will also be available for purchase prior to the concert. All physical distancing measures will be followed, including the wearing of masks.

Tickets are available for purchase on the MoCA Westport website (http://www.mocawestport.org), or by calling 203/222-7070. The maximum number of tickets available will be in accordance with Connecticut state guidelines.

Jean L. Simons of Westport, wife of the deceased Ted Simons, “Westport’s Music Man,” died on June 22. She was 87.

Born in Norwich, she attended Eastern State University and then attended Columbia University receiving a Master of Arts degree.

She had a varied career life. She danced in night clubs before becoming a teacher, worked as a bookkeeper for an advertising agency while attending Columbia, then combined teaching and dance in NYC, teaching dance and movement classes. She went on to doing costumes for Industrial shows and helping her husband to produce shows. She lived in NYC for 30 years before making Westport the family home.

Her husband quoted that “she had a great love for life and a wild sense of humor.” Ted Simons died in 2017 at age 84. (See obituary HERE.)

She was a very active member of the Westport Woman’s Club, The African Violet Society, the Center for Senior Activities, and the Red Hat Society.

She is survived by her son, Eric Simons of Manhattan, her daughter Jill Salerno and husband Tony of Fairfield, her grandchildren Justin and Samantha Salerno, and her sister-in-law Mary-Lou Farbman of Cottonwood, Arizona. She was predeceased by a sister Mildred Furman.

All services will be private.

He was a teacher, a storyteller, and a marriage and family therapist, but most important, he was the beloved husband of Donna Rae Hitt Meyers for 51 years, and father to Liese Meyers Niedermayer, Jennifer Meyers (Mark), Adam Meyers (Ingrid), Melissa Fable Dempsey, Kimberly Fable, and Chaz Fable (Valeria). Garry was predeceased by his youngest daughter, Rebekah Meyers Aronson.

Garry was a veteran of the Korean conflict, and earned a master’s degree in education from the University of Bridgeport in 1956 on the GI Bill. He taught English at Staples High School in Westport and was a principal of the firm Tape Book, before creating the first public high school special education program for emotionally disturbed adolescents in the state of Connecticut.

The gratification Garry experienced as he developed this safe place for “the kids” spurred him to devote his professional life to helping more children and more families. With the invaluable encouragement of Dr. Harry Brown, he pursued a master’s in marriage and family therapy from Southern Connecticut State University, becoming a licensed MFT in Connecticut and Massachusetts.

Whether he was in line at the hardware store or traveling to Russia, Garry was always making new friends. He had an agile, insatiable mind, an irreverent, irresistible sense of humor, and a genuine interest in everyone he’d meet. His life was a celebration of the people he loved, the places he and Donna visited, and the stories that grew from these experiences.

During their years together, Garry and Donna called many places home – Westport, Redding, and Sandy Hook, Astoria, New York; Oak Bluffs, Massachusetts; and Stratford among them.

In their home on Martha’s Vineyard, Garry and Donna created a haven for family and friends to make and share memories that will comfort all who were fortunate enough to spend time there; it was especially cherished by Garry’s grandchildren, Bryan, Erich, Stephanie, Randi, Jessica, Daniel, Jacqueline, Kristen, Alexandra, Matthew, Teddy, Olivia, David, Kiona, Julie Rae, Julian, and Julia.

A celebration of Garry’s life will be held at a date and time to be announced.

Memorial contributions in his memory may be made to TheTrevor Project or to the Center for Spectrum Services.

Admittedly, it’s early to speculate on the 2021 Academy Awards, but I suspect Spike Lee’s new movie, “Da 5 Bloods,” streaming on Netflix, will be a factor, along with Delroy Lindo’s dynamic performance.

Exploring racial inequity through the lens of the Vietnam War, it’s the story of four African-American veterans who gather at a bar called Apocalypse Now in Ho Chi Minh City. They’re embarking on a dual mission: to recover the body of Stormin’ Norman (Chadwick Boseman), their revered squad leader, and find a cache of gold bars they’d buried after he was killed.

Otis (Clarke Peters) has organized the expedition. When he visits Tien (Le Y Lan), a Vietnamese woman who was his lover while stationed in Saigon, he discovers he has a grown daughter (Sandy Huong Pham).

And it’s Tien who connects Otis with Deroches (Jean Reno), the shady Frenchman who will set up offshore accounts to help them launder the gold originally sent by the US as payment for South Vietnamese fighters.

The compelling screenplay by Spike Lee and Kevin Willmott revises a previous script, “The Last Tour” by Danny Bilson and Paul De Meo, which focused on aging white veterans, and it’s obvious how much Lee was influenced by his favorite film: John Huston’s “The Treasure of Sierra Madre” (1948).

“We flipped that concept. Put our flavor on it, some barbecue sauce, some funk, some Marvin Gay. And there you have it,” Lee says.

Elle Fanning stars in “The Great,” a cheeky 18th century comedic drama about Catherine the Great of Russia, billed as “an occasionally true story.”

When optimistic 19 year-old Catherine (Fanning), daughter of a German aristocrat, arrives in Russia for an arranged marriage with Czar Peter III (Nicholas Hoult), she has no idea what a cruel, erratic idiot he is, more devoted to his whores and horses than her or his country.

Since better educated, bookish Catherine is of little or no interest to him, aside from bearing him a son, Peter appoints Leo (Sebastian de Souza) to be her lover, since he’s known to have a large, but sterile organ.

“Peter did not have an entirely bad heart,” Catherine once observed, “but a weak man usually does not.”

So, as her husband wages a continuing war with Sweden, Catherine systematically gathers her own idealistic power base, including her lady-in-waiting Marial (Phoebe Fox) and Count Orlo (Sacha Dhawan).

It was Orlo who came up with the diabolical plan: “It is better we secure the palace, arrest him, get him to sign an abdication, send him to house arrest, and then burn the house down…”

Eventually, Catherine has Peter deposed in a 1762 coup, so she becomes Empress of Russia, determined to bring female education and enlightenment through the arts and science to her people.

Scripted by showrunner Tony McNamara (co-writer of Yorgos Lanthimos’ “The Favourite”) the 10 hour-long episodes, filled with absurd palace intrigue and farcical depravity, are of varying quality, cohesion and interest.

One major aberration is presenting Peter III as Peter the Great’s son; in reality, he was his grandson.

This mini-series has no relation to nor should be confused with last year’s HBO mini-series “Catherine the Great,” starring Helen Mirren. And for those who enjoy old movies, back in 1934, the Russian ruler was embodied by Marlene Dietrich in “The Scarlet Empress.”

On the Granger Gauge, “The Great” is a bawdy, satirical 7, a royal romp.

Disney disasters are rare but the big-budget, live-action fantasy “Artemis Fowl” is certainly one of them.

Based on Erin Colfer’s popular YA novels of the same name, it’s been ineptly adapted by Irish playwright Conor McPherson and Hamish McColl and clumsily directed by Britain’s Kenneth Branagh (“Thor,” “Murder on the Orient Express”).

Set in Northern Ireland, it focuses on Fowl Manor, where a wealthy art and antiques dealer, Artemis Fowl Sr. (Colin Farrell), has gone missing, much to the distress of his precocious 12 year-old son, Artemis Jr. (Ferdia Show), a criminal mastermind who has already mastered biotechnology (by cloning a goat), emerging as a surf-loving, nerdy chess champion.

On the Granger Gauge, “Artemis Fowl” is a dreadfully disappointing 2. Don’t bother streaming on Disney Plus. 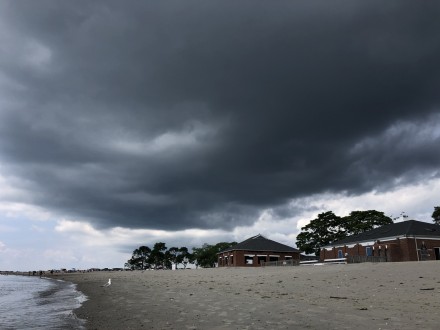