For November 12th and 13th, Bedford/Coleytown Middle School and Staples High School will be operating through a full remote teaching model for all students and staff. The principals will be sending further information this evening about the schedules for both days.

The decision to move our secondary schools to a remote model for two days came as a result of several individuals testing positive and the subsequent need to quarantine many individuals and continue contact tracing. Due to the number of quartainted staff members, we are unable to appropriately staff our secondary buildings and supervise our students.

As of the time I am writing to you this evening we have 12 newly confirmed cases of COVID-19 in the following schools, including 5 new cases in the past few hours:

Our mitigating measures continue to be effective in minimizing and preventing spread in our schools.  However, it is critical that the entire community remains vigilant in taking all precautions to prevent further community transmission.

Who would have thought that “The Queen’s Gambit,” a seven-episode Netflix series—built around an intellectual game like chess—could be so compelling?

It begins in Kentucky in 1958, as young Beth Harmon (Isla Johnston) is placed in a Dickensian orphanage after a car crash killed her mother. Tipped off by an older girl named Jolene (Moses Ingram), Beth discovers that they’re being force-fed habit-forming drugs to “tranquilize” them.

One day, when Beth wanders into the basement to clean erasers, she befriends the grumpy custodian, Mr. Shaibel (Bill Camp), who teaches her how to play chess. Beth becomes so adept so quickly that when she’s invited to compete with the local school’s chess team, she trounces every player.

Realizing that her phenomenal chess acumen is her ticket to fame and fortune, Beth starts competing in local tournaments, followed by national and international matches, culminating in Moscow, where she faces legendary Russian champion Vasily Bogov (Marcin Dorocinski).

Based on a novel by Walter Tevis (“The Man Who Fell to Earth,” “The Hustler”), it’s written and directed by Scott Frank (“Godless”), who turns this fictional character-study into a fascinating coming-of-age drama about an obsessive, self-destructive young woman taking control of her life and succeeding in what is traditionally considered a man’s domain.

What’s most remarkable is the sustained tension of the chess scenes; filmed with authenticity, thanks to New York City chess coach Bruce Pandolfini and former world champion Garry Kasparov. And, if you’re intrigued about chess-on-film, find “Searching for Bobby Fischer” (1993) and “Queen of Katwe” (2016).

On the Granger Movie Gauge of 1 to 10, “The Queen’s Gambit” is an intriguing 8—about the emotional price paid for genius.

Set in Manhattan, Sofia Coppola’s snappy comedic drama “On the Rocks,” available on Apple TV+, revolves around a meddling father, his anxious daughter and a marriage that may or may not be falling apart.

So, naturally, when Laura suspects her husband may be cheating on her, chauvinistic Felix is the one she confides in.

Lecherous Felix wryly explains: “It’s his nature. Males are forced to fight to dominate and impregnate all females.”

Meanwhile, Laura is an author with writer’s block. And when Dean comes home from a London business trip, Laura finds a woman’s toiletries bag in his luggage.

Could it belong to his assistant Fiona (Jessica Henwick)? Turns out—it does. Fiona couldn’t fit it into her carry-on so Dean stuffed it into his luggage. At least, that’s how he explains its presence.

But then why is Dean so hesitant to commit to a summer vacation rental? And what’s up with his “sudden” business trip to Manzanillo, Mexico?

While Rashida Jones embodies vulnerability, Bill Murray steals the show, as he did in Coppola’s “Lost in Translation” (2003), this time embodying an irresistibly endearing scoundrel who helps his daughter spy on her husband.

Obsessed with the concept of monogamy/marital fidelity, writer/director Sofia Coppola conveys her smart, sophisticated, incisive observations about men, no doubt formed by the dynastic Coppola family and her first marriage to director Spike Jonze.

On the Granger Gauge, “On the Rocks” is a deceptively sly, bittersweet 7, aimed at young women.

Back in 1990, Nicolas Roeg made a terrifying version of Roald Dahl’s children’s novel “The Witches,” starring Anjelica Huston as the villainess, utilizing anthropomorphic mice from Jim Henson’s Creature Shop. When Dahl saw the result, he wrote Henson, deploring the “vulgarity, bad taste and actual terror displayed.”

In this new HBO Max remake narrated by Chris Rock, director Robert Zemeckis opts for macabre silliness although, at times, it also gets a bit too intense for impressionable youngsters.

Shifting the locale from 1980s England to late 1960s Alabama, the story is told by an eight year-old Black lad (Jahzir Kadeem Bruno) whose parents died in a car crash. When he goes to live with his maternal Grandma (Octavia Spencer), she feeds him cornbread and gives him a tiny white mouse that he names Daisy (voiced by Kristin Chenoweth).

One day, at the grocery store, he’s approached by a bizarre woman (Josette Simon) offering him candy. Soon afterward, Grandma warns him about witches, noting they always wear long gloves to hide their claws and wigs to cover their bald-and-blistered heads.

Sensing danger, Grandma calls in a “favor” from a cousin and seeks refuge at the Grand Orleans Imperial Island Hotel on the Gulf of Mexico. She’s sure they’ll be safe there because the resort is filled with rich, white folk—and she believes that witches primarily prey on the poor.

But that luxurious beachfront hotel is just where the Grand High Witch (Anne Hathaway) is meeting with her coven, secretly teaching them how to turn children into mice, utilizing “Formula 86.”

While the CG chase scenes are diverting, there seems little reason for this muddled remake. Octavia Spencer oozes warmth, but Anne Hathaway must have practiced her pseudo-European accent at the bottom of a cauldron because she’s often unintelligible.

On the Granger Gauge, “The Witches” is a creepy 5—not as bewitching as it should be. 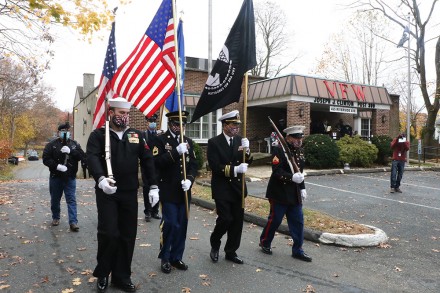 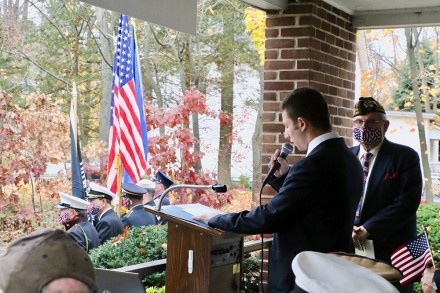 Staples senior and Wreckers football team captain Henry Beck delivered the Veterans Day address. Beck said, “The true soldier fights, not because he hates what’s in front of him, but because he loves what is behind him.” (CLICK TO ENLARGE) Dave Matlow for WestportNow.com 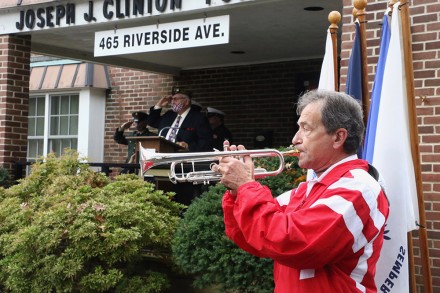 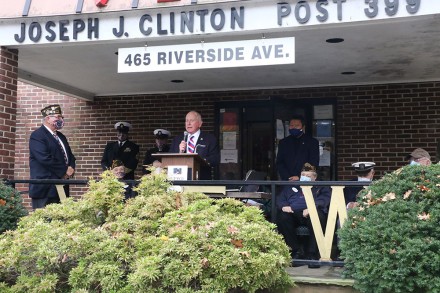 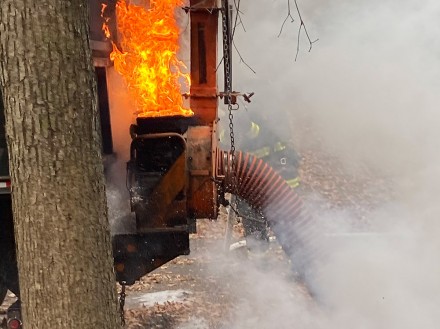 Westport Fire Department responded to truck fire on Pumpkin Hill this morning. A landscaping truck, its machinery, and contents were ablaze. An employee said the fire started on the attached leaf vacuum and spread to the vacuum’s gas tank. When the worker attempted to put the fire out with a fire extinguisher, it failed and his clothes caught fire as well as the backpack blower and leaves in the area. He was able to remove the burning clothes without injury. Westport EMS evaluated the worker. No one was taken to the hospital. (CLICK TO ENLARGE) Westport Fire Department 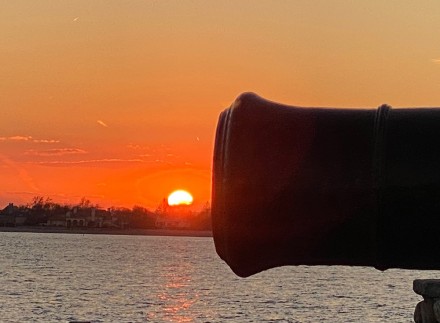 Another sunset at the cannons on Compo Beach. (CLICK TO ENLARGE) Nancy Lally for WestportNow.com