She was born Irene Wrublski in Brooklyn, NY on December 18, 1927. Following her marriage to Carlo Marcenaro in 1958, she lived in Dobbs Ferry, NY until moving Westport in 1968.

Irene was true entrepreneur. Under the business name “Lock, Stock & Barrel,” Irene performed estate sales and appraisals as well as exhibiting in antique shows across Connecticut and Westchester for over 40 years. She had a wonderful eye for finding treasures at tag sales, auctions and the goodwill. She was one of Ebay’s first Powersellers.

An avid swimmer who specialized in the backstroke, she was a longtime member of the YMCA and frequent visitor to Compo Beach. Her hobbies included stock market investing and crossword puzzling. A great supporter of wildlife charities, she had a love for all animals, which she fed lavishly at her back patio year round.

She was preceded in death by her husband, Carlo, and her siblings Alfons Wrublski, Bernice Ehrlinger, and Jean Robbins.

She is survived by her daughter, Carla Foster and son-in-law Mark, of Southport, and two grandchildren she adored, Bridgette and Andrew, as well as many squirrels, chipmunks, groundhogs, deer, and birds.

Irene’s calming presence will be greatly missed. She counted her blessing every day and always let everyone around her know she loved them.

Irene will be buried alongside her late husband at Assumption Cemetery in Westport. Services will be private.

Donations may be given to PAWS (Pet Animal Welfare Society) http://www.pawsct.org or The Bridgeport Rescue Mission http://www.bridgeportrescuemission.org

Condolences may be directed to Harding Funeral home in Westport.

Jeffrey Alan Shwartz of Newtown died suddenly on Nov. 3, 2020, in Stamford. He was 63. He was the wife of Nancy Davis Shwartz and the son of the late Leonard David Shwartz and the late Renee Bacal Keane.

He is survived by his daughter Amelia Davis Shwartz of Bristol; and his son Alan Wayland Shwartz, his daughter-in-law Grace Winkler Shwartz, and his grandson Taliesin Malcolm Shwartz of Manassas, VA.

Jeff was born Aug. 6, 1957, in New York and grew up in Westport. He went through the Westport public school system but preferred to learn by doing and reading. He was an adventurer. He lived by the philosophy that life is short and you should find a passion and pursue it. His passions included hot air ballooning, playing poker, selling cars, ham radio, master gardening (although he wasn’t very good at that), sailing, backpacking, and beekeeping.

Jeff was well-known locally as a beekeeper, mentor, and member of the Backyard Beekeepers Association. He understood and loved bees and in turn, they loved him. He devoted the last part of his life to educating adults and kids alike about honeybees as well as other insects. Jeff loved sharing his knowledge and holding bee demonstrations at schools, fairs, and farms. He encouraged children to not fear bees and wasps but to appreciate them. His advice to those who have a paper wasp nest on their property was to leave it alone because they eat things that eat us, such as mosquitos.

Jeff was one of the most passionate, interesting, and smartest men we have known. He was a problem solver. He embraced a challenge, he loved deeper than most of us, and he was the most loyal of friends. Jeff regularly talked with anyone about everything, anything, and nothing. He enjoyed chess, badminton, boomerangs, and sailing. He gulped life. The water, especially Long Island Sound, was where Jeff loved to be and where he wanted to die, if he had a choice. He loved his boat and relished every sunrise and sunset that he saw from Stamford Harbor. His dream was to sail the world, and his boat brought him one step closer to that goal.

The world has lost one of its most interesting people and his family feels privileged to have walked through life by his side. We will miss him more than we could ever express. As said by a dear friend, we do not have the words to express the grief and loss, not just for the family, but for all the unwritten chapters of Jeff’s life.

A memorial service is planned for the summer when it is hoped that COVID-19 will allow us to gather safely.

In our efforts to remain transparent with reports of positive Covid-19 cases associated with our schools, we will continue to provide these updates as information is confirmed. As of the time I am writing to you this evening we have 4 newly confirmed cases of COVID-19 from the following schools:

Those impacted have been notified by school and District officials. As a reminder, families are asked to report positive of COVID-19 cases of students using our reporting voicemail or email regardless of whether the students are in remote or hybrid models of instruction. Please follow this link for more information on reporting.

Pressured by his family to marry an “eligible” young noblewoman, Charles continued his adulterous affair with Camilla, who was married to another man … as Diana said: “There were three of us in this marriage.”

According to Emma Corrin: “The brittle coldness, the elaborate traditions and the expectations of behavior … I don’t think (Diana) anticipated that. I think she expected to join a family.”

So lonely Diana is shown roller-skating through the corridors of Buckingham Palace and suffering from bulimia. Divorced in 1996, she died in a Paris car crash in 1997. Charles and Camilla married in 2005.

Ignore complaints about “authenticity.” Obviously, the dialogue is fictional since no one overheard what Philip really said to Charles, etc. although some of it is lifted verbatim from Royal Family biographies.

I was particularly intrigued by the “Favorites” segment, revealing the shallow, entitled arrogance of the Queen’s offspring: Charles, Anne, Andrew, and Edward; it’s filled with foreshadowing.

And everything feeds back to Elizabeth, the reigning monarch; that’s why it’s called “The Crown.” As Prince Philip remarks in the concluding episode: “She’s the oxygen we all breathe.”

On the Granger Gauge of 1 to 10, “The Crown: Season 4” is an addictive, tantalizing 10—the best season yet!

J.D. Vance’s sprawling, brawling best-seller—“Hillbilly Elegy: A Memoir of a Family and Culture in Crisis”—is about his chaotic childhood in Middletown, Ohio, where much of his extended family moved from Kentucky’s Appalachian region.

In the film adaptation by Vanessa Taylor (“The Shape of Water”), directed by Ron Howard (“Apollo 13,” “A Beautiful Mind”), it comes across as a family drama, a resonant slice of rural Americana.

The non-linear plot is related by teenage Vance (Owen Asztalos) and adult Vance (Gabriel Basso). After a turbulent childhood, Vance joined the Marines, served in Iraq and went on to Yale Law School.  How he made that difficult transition, we never really find out.

Then on the eve of a pivotal job interview with a prestigious law firm, he’s summoned home by a family crisis. As always, it revolves around his perpetually drug-addicted mother, Bev (Amy Adams), suffering from a heroin overdose. For years, she was protected and defended by Mamaw (Glenn Close).

Now it falls on guilt-riddled Vance to decide what to do with Bev: who will take care of her and where she can go. Because her health insurance has lapsed, the hospital won’t keep her. And no one, including the audience, seems to care very much what happens to her.

Perhaps what resonates most is the painful perseverance of many American families that live below the poverty line, struggling for survival.

Bev is such a raw, unsympathetic character that it’s the kind of role Amy Adams must have yearned for to validate her versatility. Mark her as a Best Actress nominee.

So on the Granger Gauge, “Hillbilly Elegy” is a country-fried 5, filled with sociopathic characters in search of a story.

For devoted fans, the premiere of the 17th season of ABC’s medical drama “Grey’s Anatomy” contains a shocker: the reappearance of Patrick Dempsey as Dr. Derek Shepherd, a.k.a. “McDreamy.”

In addition, it’s the first series to incorporate to stress of our current pandemic, as the staff of Seattle-based Grey Sloan Memorial Hospital tries to cope with the COVID-19 virus.

After caring for a multitude of patients, exhausted Dr. Meredith Grey (Ellen Pompeo) develops coronavirus symptoms and is hospitalized. In her feverish delirium, the ghost of Derek, her beloved husband who died in an accident during season 11, is calling out to her on a deserted beach.

Developed by Shonda Rhimes, it’s the longest-running scripted prime-time show currently on ABC. The series centers on Meredith Grey, daughter of esteemed surgeon Ellis Grey (Kate Burton), working alongside various other doctors who struggle to balance their personal lives with their hectic schedules.

They’re supervised by Miranda Bailey (Chandra Wilson) and Richard Webber (James Pickens Jr.). Each segment begins with a voice-over narration foreshadowing the theme of the episode. The surgeons frequently form a personal connection with their patients which often relates to the doctor’s private life.

Showrunner Krista Vernoff explains that—this year—they wanted to show what healthcare workers have experienced: “Over 1,700 health care workers in the US have died of COVID. Many thousands more have been infected. Healthcare workers are on the front lines of this crisis, waging a war for which they were not trained.”

“We saw an opportunity to dramatize and illuminate their plight through the incredibly well-loved and well-known character of Meredith Grey. Doctors and nurses are fighting for us—and the least we can do is wear a mask, socially distance, and stay home whenever possible.” 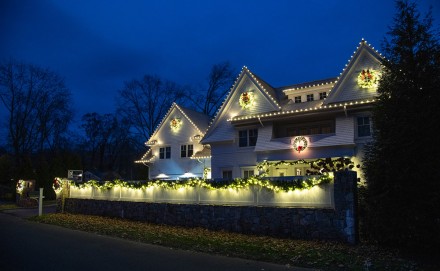 Decked out for the holidays at 4 Caccamo Lane. (CLICK TO ENLARGE) Jaime Bairaktaris for WestportNow.com 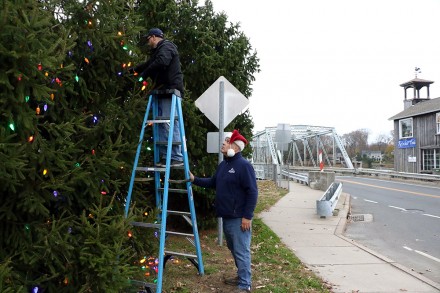