Two Westport students— a middle schooler and a high school student—have tested positive for COVID-19 but neither has been in attendance this year in Westport schools, Superintendent Thomas Scarice said today.

In an email to parents reporting on Tuesday’s opening of schools, Scarice said he received notifications about the two students late Tuesday,

“I can report that no exposures have been identified to have happened at school,” he said.

Scarice said the school district has followed all established protocols, including notifying the Westport-Weston Health District, and that close contacts that may have happened outside of school have been identified.

“These contacts have been advised by our Health District to self-quarantine for 14 days,” he said.

Here is the text of the Scarice email:

I am pleased to share that the first two days of school have been very successful.  Our eager faculty and support staff are enthusiastically welcoming back over 5,000 students.  There have been some adjustments, and there will be others over the coming days and weeks as we seek to improve our practices.  Yet, all in all, I could not be more proud to be part of this school community.

However, our current reality is that we continue to endure the effects of the COVID-19 global pandemic.  I was given a stark reminder of this yesterday.

Late yesterday afternoon, the Westport Public Schools was notified about two separate cases of students testing positive for COVID-19. One involves a middle school student and the other involves a high school student. Neither student has been in attendance at our schools thus far this year. As a result, I can report that no exposures have been identified to have happened at school.

The school district followed all established protocols by notifying the Westport/Weston Health District and sought input from our Medical Advisor. Close contacts that may have happened outside of school have been identified.  These contacts have been advised by our Health District to self-quarantine for 14 days.  Again, no exposures have been identified to have happened at school, but we remain vigilant in monitoring illnesses, absenteeism and any positive COVID-19 cases within our school community.

As a reminder, it is important that we all continue to follow the established COVID-19 safety protocols:

Self-screening of staff and students for symptoms of COVID-19 prior to attending school each day and notifying the health office of these symptoms
Staying home when sick
Following preventive measures such as regular handwashing, physical distancing and wearing masks
Cooperating with the local health district and /or school officials during contact tracing and follow all recommendations

I suspect that we will continue to feel the effects of COVID-19 for the foreseeable future.  Additional cases will likely emerge in school districts across the state.  Yet with vigilance in our preventive measures, and by working closely with our medical professionals, our parents, and our faculty, we can continue to serve our children in our schools during this challenging time.

Born March 16, 1931 in Pittsfield, Massachusetts, the daughter of David and Kathleen and (Roscoe) Hanson.

Wife of the late Bradford Towle for 27 years. Joan is survived by her two sons; Robert B. Towle of Rochester, NH and David A. Towle of San Marcos, CA; her brother David Hanson; two grandchildren; Christopher Towle and Michael Towle and two great grandchildren; Savannah Towle and Willow Towle. She was predeceased by her parents; and a son, Steven R. Towle.

Joan was a very loving person with a positive outlook on life. She had a deep appreciation for all of her family and friends and cherished the time spent with them. She will truly be missed.

A private service with immediate family members will be held. In lieu of flowers, please contribute to research for Hodgkin’s disease and Diabetes. 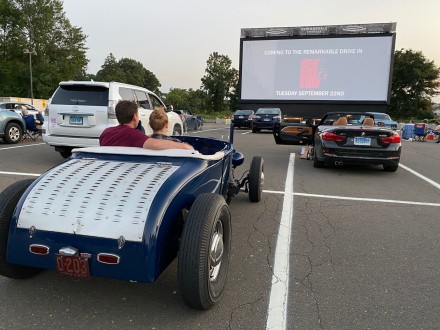 Some age appropriate cars at tonight’s showing of “American Graffiti” at the Remarkable drive in on Imperial Avenue.  (CLICK TO ENLARGE) Miggs Burroughs for WestportNow.com

Six more people have died and 417 more have received positive COVID test results since Friday, though the full impact of Labor Day outings and schools reopening will not be known for weeks.

That was the message provided to the public during the governor’s first news briefing since the long weekend.

Dr. Albert Ko, a Yale epidemiologist and a co-chair of Gov. Ned Lamont’s Reopen Connecticut Advisory Group, said that while the incubation period for COVID is about five to seven days, it can often take longer to confirm a positive diagnosis.

“I think the bottom line is that we should be vigilant now, and we’re gonna have to be vigilant in the next several weeks really to see what happened in what happened over Labor Day,” said Ko, who joined Lamont for today’s briefing.

With an infection rate of less than 1% — just 417 people out of the 49,185 tested — Connecticut headed into Labor Day weekend well positioned to prevent the virus spreading rapidly in the community.

The additional deaths over the weekend bring the state’s death count to 4,474. Fifty people are currently hospitalized with COVID-19, one of the lowest numbers since the pandemic began in mid-March.

“That’s a positivity rate yet again under 1%, so that’s all good news,” Lamont said.

That said, the governor is not willing to move to the next step of reopening Connecticut, particularly when it comes to allowing bars to open.

“I’m talking to the governors of Arizona and Texas and Southern California, where they opened up the bars, not to mention Florida. They all regretted it. They said ‘We had very low positivity rates and then things began to catch on fire’ and they thought the bars were one of those places that was quite incendiary,” Lamont said.

“So look, things are going to change, you’ve heard about some of the amazing scientific innovations that Dr. Koh was talking about, but … not yet.”

The Lamont administration has placed 34 states on its travel advisory list.

While there have been some clusters of infections at colleges in Connecticut, Lamont said he is not yet worried that the disease is spreading out of control.

“That was one speed bump that I was worried about in terms of a flare ups there. And so far, I’d say relatively so good. We’re watching like a hawk because you’ve seen some incidents in different schools, but fundamentally we’ve done about 43,000 tests across our college campuses over the last two or three weeks [and] 166 cases, which means there’s a positivity rate of less than one half of 1%,” Lamont said.

That has remained true at UConn which today reported a positive COVID rate at its Storrs campus of 0.80% — eight-tenths of 1% — among residential students. The university said there are currently 40 students on campus who are currently sick with COVID or suspected to have the illness, while 86 students have recovered and left quarantine.

The Lamont administration today also announced it has added another four states — Delaware, Maryland, Ohio and West Virginia — to its travel advisory. There are currently 34 states on the list; visitors from those states, or CT residents returning home from those states, must fill out a travel advisory form when they arrive in Connecticut and quarantine for two weeks.

States that have a positive test rate higher than 10 per 100,000 residents, or higher than a 10% positivity rate over a 7-day rolling average, are automatically placed on the list. 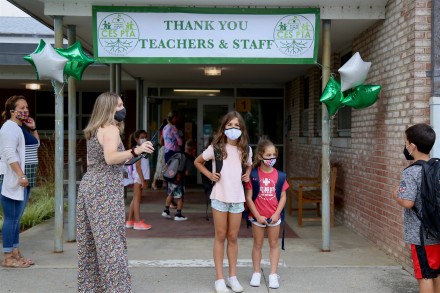 A six-month odyssey finally reached shore today when Westport students returned to school for the first time since March. 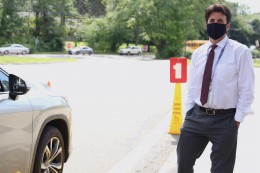 Superintendent of Schools Thomas Scarice visited with different schools throughout the day, including Coleytown Elementary School. (CLICK TO ENLARGE) Jarret Liotta for WestportNow.com

Though they were hidden behind masks, the first day of in-person learning featured many smiling faces from kids, parents and staff alike.

“I’m very happy my kids are in school,” said Ana Johnson, who picked up her son Wyatt, 9, from the morning class at Coleytown Elementary School.

“I’m very appreciative of the teachers and the staff for all their hard work to hopefully have a good first day,” she said.

“We’re so grateful that they get to go,” echoed Bethany Eppner, whose family recently relocated from New York City, where she said class is not in in-person session.

Thomas Scarice, Westport’s new superintendent of schools, was on hand to check in with staff and greet parents at various schools.

“It is as good as can be expected,” he said of the first day’s operation.

“We are asking people to take on Herculean tasks and they are all rising up,” he said, noting he was humbled to be serving as their superintendent.

“We have asked our professionals to not only reinvent how they’re teaching, but also how we run our school in and out, and they are all stepping up to the challenge with a spectacular attitude,” Scarice said.

“I’m so glad that she has an opportunity to get out there and give it a shot,” said Shiri Homler, whose daughter Lucy, 5, began her first day of kindergarten.

“I’m hoping that this all works out,” she said.

Shiri Homler and her daughter Lucy, 5, are both smiles behind their masks following her first successful day of kindergarten at Coleytown Elementary School today. (CLICK TO ENLARGE) Jarret Liotta for WestportNow.com 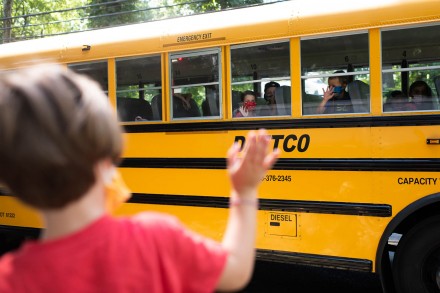 A brother and sister get goodbye waves today from a younger sibling as they board a bus en route to an afternoon session at Coleytown Elementary School.. (CLICK TO ENLARGE) Anna-Liisa Nixon for WestportNow.com 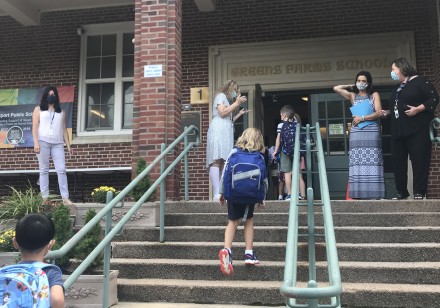